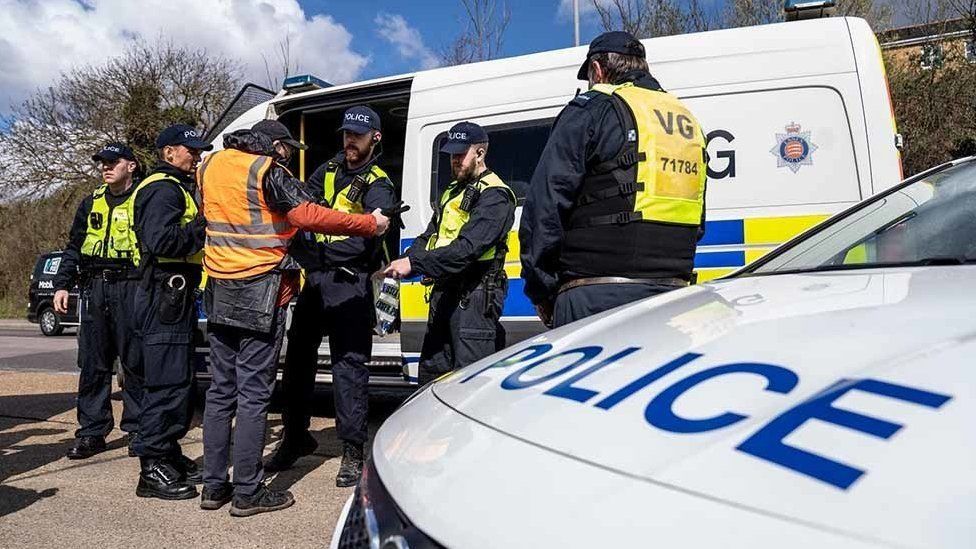 More than 80 people have been arrested as climate change protesters continued to block oil terminals.

Activists from Just Stop Oil said they had obstructed access to a tanker park and revealed an underground network of tunnels at two oil terminals in Essex.

The protesters are demanding the UK government stops new oil and gas projects.

Essex Police said 83 people were arrested for a variety of offences after protests in the Thurrock area.

Twenty people were arrested on Saturday at Oliver Road and Stoneness Road, Grays, with officers "continuing to engage" with protesters at both sites, and at Purfleet.

Assistant Chief Constable Rachel Nolan said: "Our officers are continuing to work in exceptionally challenging circumstances with a view to bringing these protests to a safe and swift conclusion.

"I would like to thank businesses, local drivers and workers for their continued patience whilst we carry out our work."

The activists said Titan Truck Park in Grays contained more than 100 oil tankers which service the three major oil terminals in the area.

It comes after activists from Just Stop Oil and Extinction Rebellion obstructed 10 fuel sites in the Midlands and southern England in the early hours of Friday, to stand against "expanding UK oil and gas production".

Protesters glued themselves on to roads and locked on to oil drums and each other.

ExxonMobil UK, one of the country's largest privately-owned underground oil pipeline distribution networks, said it shut down three of its terminals as a result, and police from at least five forces were deployed to tackle the demonstrations.

The Met arrested 14 activists who broke into a facility at Bedfont Road in Staines, Surrey, and West Midlands Police arrested six people at a terminal in Tyburn, Birmingham.