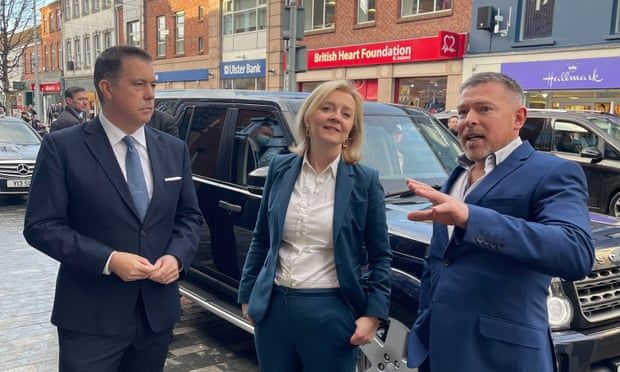 The Democratic Unionist party has set 21 February as a fresh deadline for the foreign secretary, Liz Truss, to find a solution to the dispute over the Northern Ireland Brexit protocol.

Givan said the government must take unilateral action if an agreed position cannot be reached with the EU by the fourth week of February.

But Sinn Féin has said any attempt to trigger article 16 of the protocol would cause more uncertainty in Northern Ireland.

Truss said she wants to strike a deal on the protocol that works for everyone in the region. “We are making progress. We’re having constructive talks. I want to make significant progress by February. That’s important but it’s important that we secure the support of all of the communities in Northern Ireland, including the unionist community.”

Sources close to the foreign secretary said she was in “listening mode” and told party leaders of her “commitment to securing changes to the protocol that defend peace and stability, protect sovereignty of decision-making for all, and ensure free flow of GB-NI goods”.

They added that she believed a deal could be done and she was looking for “durable, practical solutions”.

Earlier this week Truss and the European Commission vice-president, Maroš Šefčovič, said they hoped a deal could be done by the end of February before the electioneering for the May Stormont elections.

Speaking after the meeting, Givan said there has to be progress made “imminently” in negotiations. He said: “Liz Truss has indicated that she is making progress with the European Union and obviously 21 February is a very significant date in terms of what progress will have been made or not made.”

A meeting of the joint working committee on the withdrawal agreement takes place on that date.

He added: “I pressed the foreign secretary about the need to take action in the absence of there being progress and an agreed outcome with the European Union. The foreign secretary indicated that the UK government does stand ready to take action, she mentioned the use of article 16, but she prefers to get an agreed position with the European Union.”

He added: “I have emphasised the absolute critical nature of that progress being made, because the protocol is causing instability to these institutions, it is damaging our economy and this is having a real impact on Northern Ireland.

The meeting came a day after the DUP’s leader, Sir Jeffrey Donaldson, said he could not guarantee Givan would still be in position next week. It also came just hours after the SDLP criticised the Foreign, Commonwealth and Development Office for “playing politics” with the Northern Ireland protocol in an official video on the negotiations.

In the video, the FCDO said: “The Northern Ireland protocol was designed to protect the peace process and respect all communities in Northern Ireland. It is doing the opposite.”

Claire Hanna, the Social Democratic and Labour party MP, said it was a Trumpian strategy while her colleague Nichola Mallon, deputy party leader, said it was “reckless”.