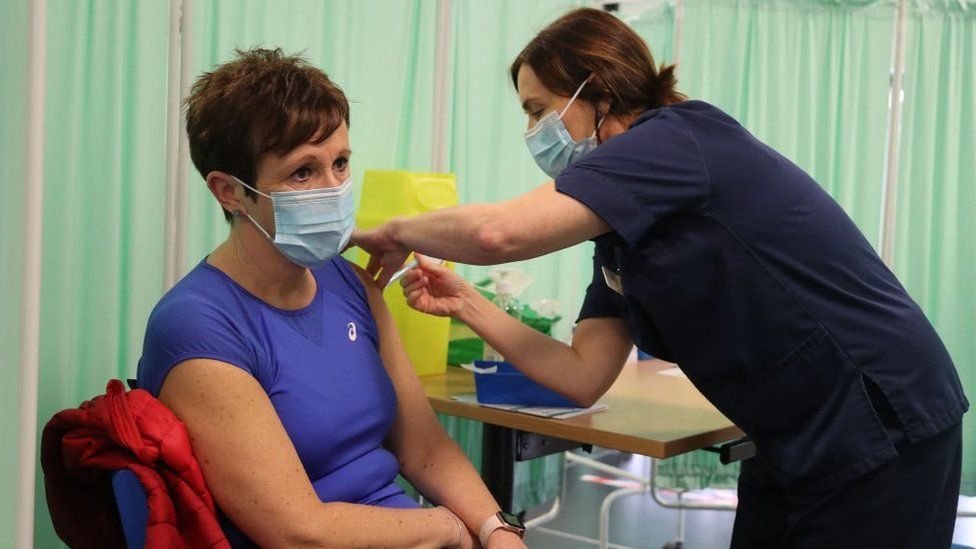 The take-up among those aged 45-49 is at 59% after they started being offered the jab earlier this month.

But uptake among care home staff - one of the first groups to be offered the jab - is still around 80% despite attempts to get more to come forward.

It comes as figures show that coronavirus was not the leading cause of death in England and Wales in March, for the first time since October.

Covid had been the leading cause of death every month between November and February, according to Office for National Statistics data.

Health Secretary Matt Hancock said he was "delighted" 95% of over-50s in England had been vaccinated.

He tweeted that the government was on track to offer the vaccine to all adults by the end of July and added that it was "safe and effective".

Meanwhile, the last scheduled flight from India to the UK has landed ahead of new coronavirus curbs being placed on arrivals from the country.

Public Health England (PHE) confirmed on Thursday that a further 55 cases of the virus variant first identified in India were found in the UK in the week to 14 April.

A further 18 people in the UK have died within 28 days of testing positive for Covid, bringing the total by that measure to 127,345.

There have also been a further 2,729 lab-confirmed cases of the virus in the UK. 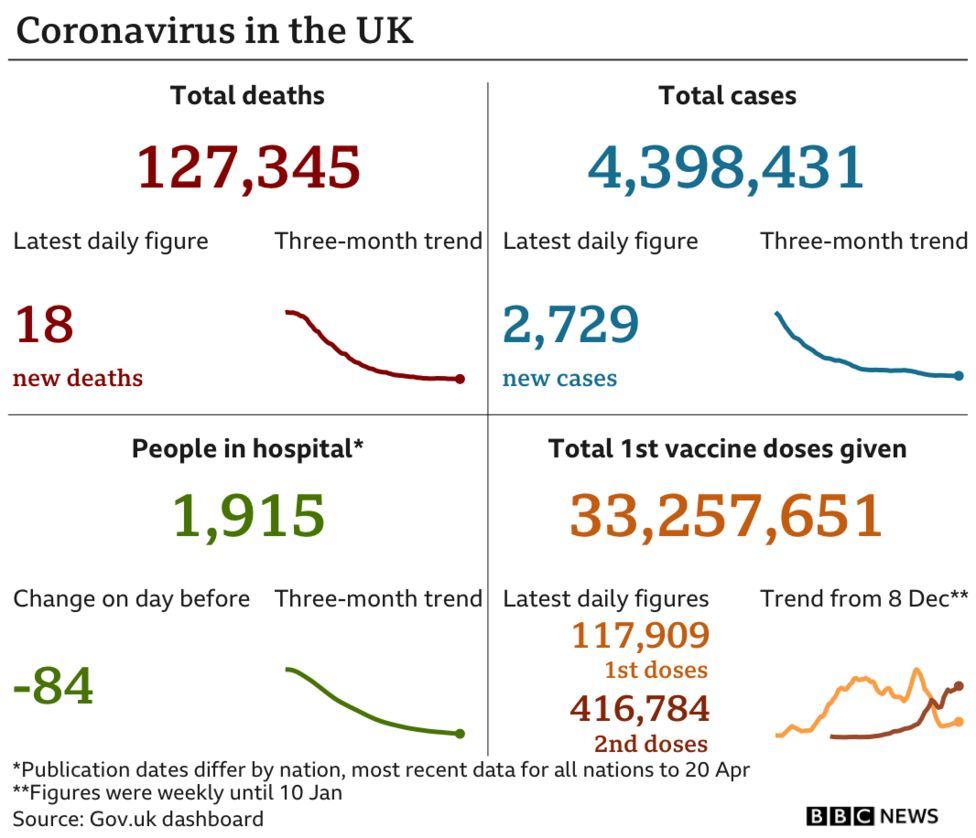 The latest vaccination figures show more than 33 million people in the UK have received at least one dose of a coronavirus vaccine with more than 10 million having received both doses.

Government data shows that a further 117,909 first doses were given on Wednesday as well as 416,784 second shots.

But despite efforts to increase uptake among care home workers NHS England said 80.4% of eligible staff working at older adult care homes had received the jab by 18 April.

Ministers have launched a consultation on whether care home workers should be required to receive a Covid vaccine, with Mr Hancock saying it was "something many care homes have called for".

On Thursday, the Medicines and Healthcare products Regulatory Agency (MHRA) said there had been 168 cases up to 14 April of rare blood clots in the UK in people who had had the Oxford-AstraZeneca coronavirus vaccine - resulting in 32 deaths.

With an estimated 21.2 million AstraZeneca jabs given across the UK by that date, the overall case incidence is 7.9 per million doses, the MHRA added.

People aged under 30 are to be offered an alternative vaccine to AstraZeneca, but the medicines regulator said the benefits of the vaccine still outweigh the risks for the vast majority of people.

The latest vaccination figures were released after Margaret Keenan - the first person to be vaccinated in the UK - praised the "incredible" rollout of the jabs.

The 91-year-old was given the Pfizer-BioNTech vaccine in early December at at University Hospital in Coventry in December.

In an online chat with NHS chief executive Sir Simon Stevens, Mrs Keenan, originally from Enniskillen, Co Fermanagh, urged anyone who has not yet been vaccinated to come forward.

"There's nothing to it, you don't feel anything" she said.