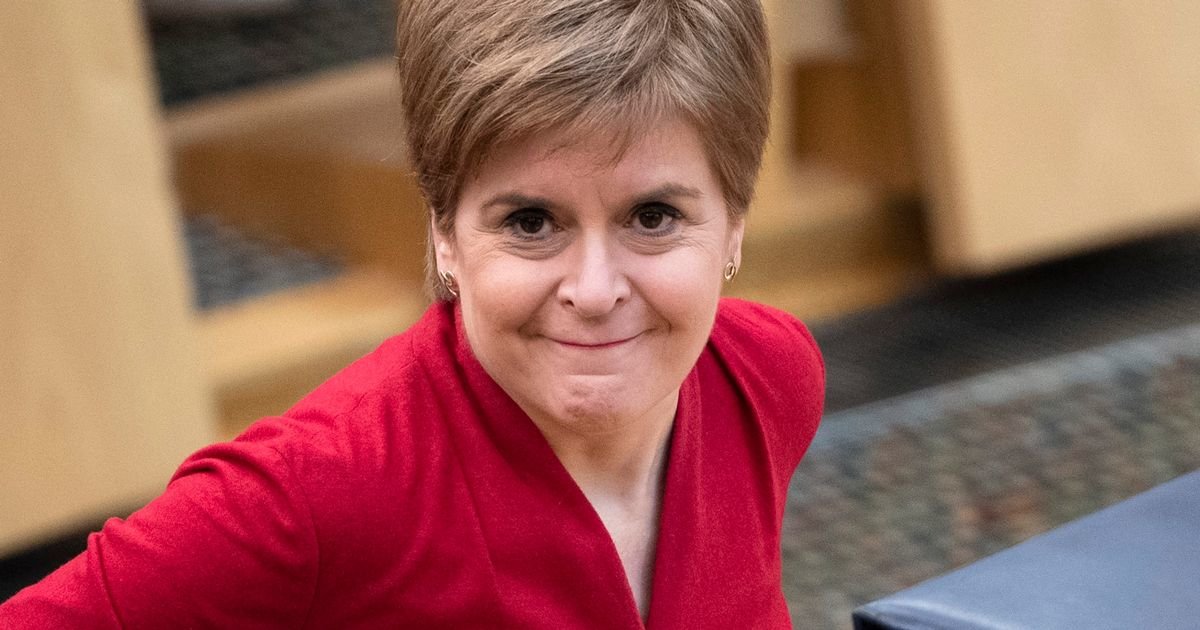 Figures show there were 50.5 deaths per million in Scotland in the week to 15 November, compared to 40.6 in England.

The first minister said it was too soon to be comparing statistics while "still in the teeth of a pandemic".

She told the BBC's Andrew Marr Show the death toll was unacceptable.

"I have done everything and will continue to do everything I can to try and control the virus to try and keep it as low as possible, to take the tough decisions that have to be taken in order to achieve that and to try to take people of Scotland along in these difficult steps with me as far as I possibly can," she said.

"But nobody underestimates the pain, the grief, the suffering that this global pandemic has brought to us."

While the weekly statistics show that Scotland's death rate has been above England's in the last four weeks, Scotland's overall death rate is lower than England and Wales.

The interview came after the SNP leader told her party's virtual conference on Saturday that she had "never been so certain" that Scotland would become independent.

On Sunday the conference backed a plan to pressure the UK government into holding another referendum on the issue - and to explore alternative legal routes if it refuses.

Douglas Ross, the leader of Scottish Conservatives, said the SNP's record was "clear for all to see" but Ms Sturgeon's priority was "dragging Scotland through another divisive referendum". 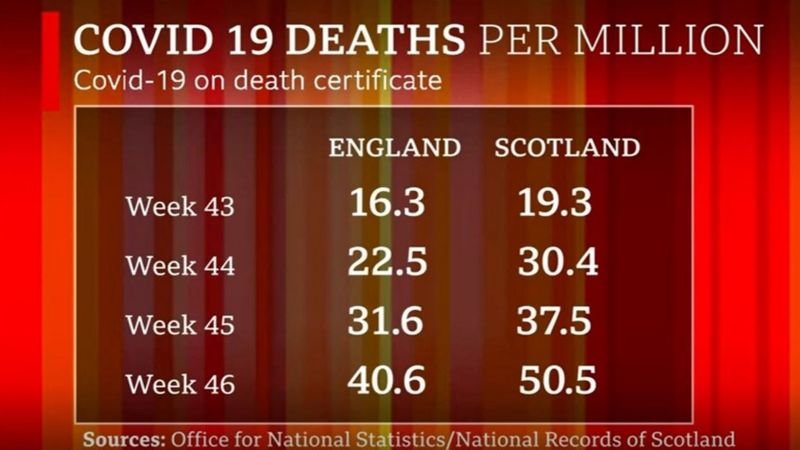 Comparative death rates were presented to the first minister on The Andrew Marr Show.

Scotland's death toll surpassed 5,000 earlier this month and the latest National Records of Scotland figures now show 5,380 people have died with the virus in Scotland.

The statistics agency records the number of death certificates that mention the virus.

In England, using the same measure, more than 57,000 people have died with the virus.

Challenged on the death rate in Scotland, Ms Sturgeon said that, over the course of the whole pandemic, it has been "quite significantly lower" than England and Wales, though it was higher than that of Northern Ireland.

"But across the whole of the UK, across much of Europe, far more people have died from this virus than any of us feel comfortable with," she added.

The SNP leader was also asked about care home deaths after a University of Stirling report found that 47% of Scotland's Covid deaths in the first wave were in care homes, compared to 30% in England.

"If you look at excess deaths overall in care homes across the UK, excess deaths in Scotland have actually been lower than in England but a higher proportion of these excess deaths have been attributed to Covid," she said.

"So in England more of the excess deaths have been attributed to other things, and certainly not to Covid. That simplistic view that the care home death toll is worse in Scotland perhaps doesn't bear that scrutiny.

"The death toll is unacceptable in Scotland, England, Wales, Northern Ireland, and across much of Europe."

The Scottish government has introduced five levels of restrictions in a bid to suppress the spread of the virus during the second wave.

People in 11 local authorities are currently living under the strictest limits of level four, with restrictions on travel, hospitality and non-essential shopping.

Later a Scottish government spokesman said weekly statistics did not accurately portray trends across the whole pandemic and "can be misleading if looked at in isolation".

"Deaths from Covid-19 in Scotland have been significantly lower over the course of the pandemic than England and Wales, with over 7% few deaths per 100,000 than England."

Reacting to the interview, the Scottish Conservatives' Douglas Ross said the SNP's record was "clear to see".

Meanwhile Willie Rennie, leader of the Scottish Liberal Democrat, said Ms Sturgeon was "good at presentation but has repeatedly fallen short on delivery."

He said she "talks a good game" but she "did not use the summer well to to prepare for the second wave of the virus in the autumn".

Labour MP Ian Murray said Ms Sturgeon should be held to account for her "failings in office".

"Amid a child poverty crisis, care homes scandal and utter contempt for Holyrood, the first minister's record is one of broken promises to the people of Scotland," he added.

"Her only priority is to divide Scotland at a time when we need to bring people together for a period of healing and recovery."