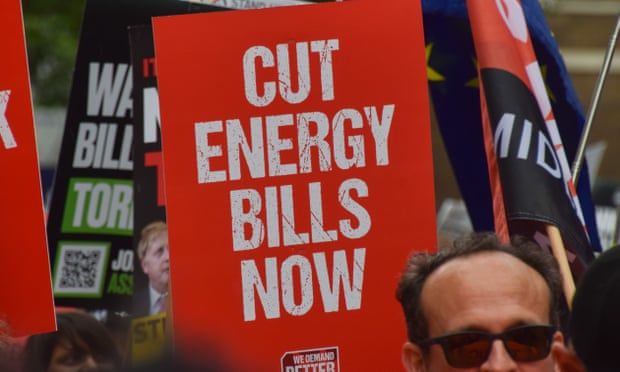 Enough is Enough campaign garners 300,000 signs-ups with 50 rallies planned next week across Britain
A new campaign group urging the government to do more to tackle the cost of living crisis will kick off a series of 50 rallies across Britain with a launch event in London next week.

Trade unions, community groups, tenants’ organisations and politicians launched the Enough is Enough campaign this week and it has already received 300,000 sign-ups with the launch video viewed more than 6m times.

Like the TUC, Enough is Enough is calling for this autumn’s energy price cap increase to be cancelled as soaring bills push household finances to the brink. There is growing evidence that people are already struggling, with the number contacting Citizens Advice because they cannot afford both food and energy having jumped more than threefold in a year, according to recent figures published by the charity.

Enough is Enough is also calling for a “real” pay rise for workers which it defines as a public sector pay increase in line with inflation and a pathway to a £15 minimum wage. The current minimum wage rate for adults aged 23 and over is £9.50. It also wants the government to end food poverty by introducing free school meals for all and reinstating the £20-a-week universal credit uplift.

“Working people are seeing how a tiny elite want to make their lives all about working harder and longer for less,” Ward said. “Now that same elite is profiteering from a cost of living crisis that will drive millions into poverty with sky-high bills. Things can’t go on like this: it’s time to say enough is enough.”

Public anger is growing over the government’s response to rising living costs. Earlier this year thousands of people gathered in London for a TUC rally that railed against government inaction on the cost of living crisis.

More than 100,000 people are also threatening to cancel their direct debits for gas and electricity from October in protest against rocketing energy prices, as part of the Don’t Pay UK campaign.

Don’t Pay said it would only take action if 1 million people promise to join in and are hoping for a rerun of the poll tax protests that helped bring down Margaret Thatcher’s government when 17 million people refused to pay.
Add Comment