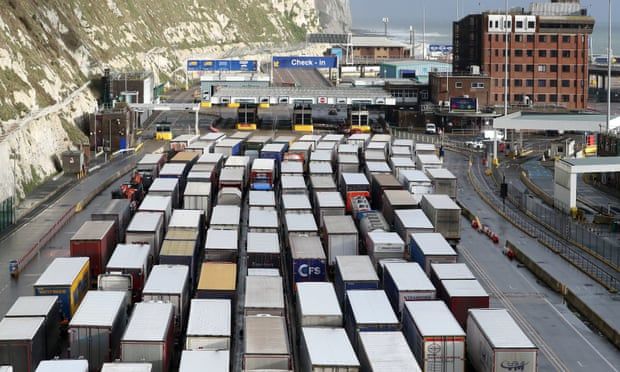 Collapse of trade with EU will ‘last until the summer’

Delays and confusion at the UK’s ports threatens to put hundreds of small and medium-sized exporters out of business
The collapse of Britain’s trade with the EU will continue into the summer after the failure to recruit up to 30,000 customs agents, despite government assurances that normal service has resumed, industry groups have warned.

Delays and confusion at the UK’s ports, which have resulted in 40% of trucks crossing the Channel with empty containers, threatens to put hundreds of small and medium exporters out of business and cost the government millions of pounds in lost trade tariffs.

The warnings follow the most dramatic monthly fall in exports from the UK to the EU since records began 20 years ago. Exports tumbled by almost 41% as thousands of trucks failed to gain entry to the EU, mostly following customs hold-ups due to a lack of compliant paperwork.

Businesses also reported that a lack of customs agents meant they were unable to respond to orders from customers based in the EU or found their goods were returned at huge cost.

In January, which marked the first month since leaving the EU on terms agreed by Boris Johnson’s government, official data showed that goods exports to the 27-member bloc fell by a staggering £5.6bn, while imports fell by almost 30%, or £6.6bn.

The Cabinet Office minister, Michael Gove, has answered critics of the UK’s failure to prepare for border checks by delaying a previously agreed time​table for imports. Under a new scheme, controls on animal product imports will be pushed back from April until October and checks on most other goods will only take place at UK ports from next January.

But Brussels has insisted that UK exporters comply with EU rules on imports, forcing many British firms to find a customs agent and a vet to certify that animal products are safe to enter the EU.

He said: “The delay to import checks is welcome but not a universal fix – we cannot be confident that operators will even be ready on 1 October. The number of skilled customs agents and veterinarians in place across the EU to complete the relevant documentation still falls far short of what is needed.”

Responding to the trade data, Lord Frost, the cabinet minister responsible for Britain’s relationship with the EU, said there was a “unique combination of factors” that meant it was “inevitable that we would see some unusual figures this January”. He added these effects were now “starting to unwind” and overall freight volumes had been “back to their normal levels for over a month now”.

Richard Ballantyne, head of the British Ports Association, said most ports had seen a recovery in shipments over recent weeks, although the delay to import checks had “put off a problem rather than resolved it”.

Rod McKenzie, the RHA head of public affairs, said that with 40% of containers travelling to the EU without goods, shipment numbers failed to show the full impact of new Brexit-related red tape at UK borders.

He said the recruitment of customs agents needed to rise by around 30,000 to nearer 50,000 to cope with the extra regulations. “Judging by our own experience of customs agents, they are swamped with calls and turning away business, which is ridiculous when we have had four years to sort this out.”

He added that delays and loss of exports would continue until more customs agents were trained, leading to delays until at least the summer.

Small and medium businesses are likely to be hardest hit by the dearth of agents that play a crucial role in handling the mountain of new paperwork being imposed on firms that wish to continue trading in Europe.

Alex Altmann, a partner at accountants Blick Rothenberg and the head of the firm’s Brexit advisory group, said: “There is no quick fix to this problem. What we need is an ‘exporter support scheme’ to help British companies.”

Ministers have asked local chambers of commerce to train new customs agents, but the process is understood to be hampered by a lack of information and training for chamber staff to pass on.

Altmann, who is also a chair of the British Chamber of Commerce in Germany, said the pay of customs agents was low and meant recruitment was difficult. He added: “Extending the customs easements at the UK border until the end of 2021 is a confession by the government that the border operating model is not working. Imports from the EU are still more than 30% down compared to last year and businesses struggle to deal with the new red tape.”

A spokesperson for HMRC said: “In total, the government has made over £80m available to support the customs intermediary sector to deal with EU trade in 2021. HMRC designed the grant scheme to be used flexibly by the sector to ensure that they can increase their capacity as they best see fit, whether this involves recruitment, training or better use of IT.

“Recent research has shown the sector expected to see a near fourfold increase in their ability to process declarations and that there are intermediary businesses who have spare capacity.”

The British Chambers of Commerce has told ministers that the difficulties faced by businesses on the ground “go well beyond just teething problems” and disruption to UK-EU trade flows had persisted into March.

Some economists have forecast that delays at UK borders will drag on growth for at least the rest of the year while the Treasury’s official economic forecaster, the Office for Budget Responsibility, has said the thin Brexit deal signed on Christmas Eve would knock 4 percentage points off UK growth over the longer term.
#Boris Johnson
Add Comment