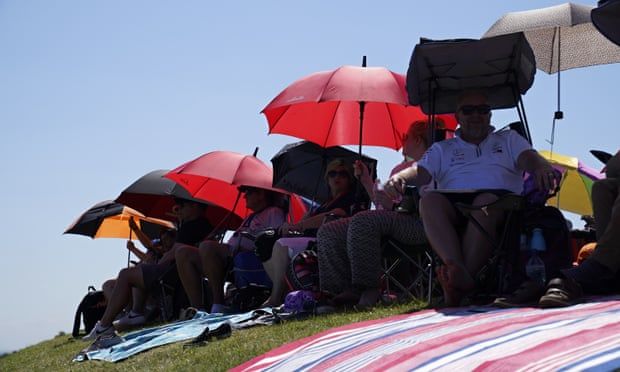 Public health bodies issue warning to use sun screen as mercury hits year-high of 31.6C at Heathrow
Children have been treated in hospital for extreme sunburn as Britain experienced the hottest weekend of the year.

Temperatures reached 31.6C at Heathrow and 30.2C in Cardiff on Sunday, making it the hottest day of the year, as an area of high pressure over the UK maintained warm conditions.

Three children with sunburn to what were described as “fairly large areas of their bodies” were admitted to the Welsh centre for burns and plastic surgery at Swansea’s Morriston hospital over the course of Friday and Saturday.

“Our burns centre has been treating a lot of children with serious sunburn and staff fear a further surge in cases in the coming days,” the Swansea Bay University health board said in a statement. “Please remember to be sun safe. Just a few minutes applying a high-factor sunscreen could save you and your child a lot of pain and suffering.”

Across England on Sunday, three people died after the emergency services rescued them from water. Greater Manchester police said that despite a rescue operation at Salford Quays, a 19-year-old man had died there. In North Yorkshire, the body of a man in his 50s was recovered from the River Ouse, close to the Water End Bridge in York, after kayakers alerted the emergency services. Thames Valley police said a teenage girl had been brought out from Ducklington Lake in Witney, near Oxford, but had sadly died later in hospital.

Northern Ireland recorded its hottest day on Saturday. The townland of Ballywatticock at Strangford Lough set a record with a temperature of 31.2C; the previous record of 30.8C was reached in 1976 and 1983.

In England, a temperature of 30.7C was recorded at Linton-on-Ouse in North Yorkshire on Saturday.

Public health authorities issued a call for people to keep an eye on anyone at risk from high temperatures, including older people, those with underlying health conditions and young children.

The Met Office forecast a warm night for many parts of the UK, with sunny spells continuing on Monday, particularly in the south of England.

“Dry, very warm or hot” conditions are expected to last into the week, with isolated heavy showers possible, though with cloudier and cooler periods in the north and along the east coast.

A Met Office spokesperson said: “We are expecting temperatures to continue on the high side right through until Thursday, although the day-to-day detail will change and there is a tendency for the highest maximum temperatures to migrate west.

“So, we are expecting Monday and Tuesday for the maximum temperatures to be in the south-west and in south Wales, and then later in the week temperatures climbing across Northern Ireland and the north-west.”
Add Comment