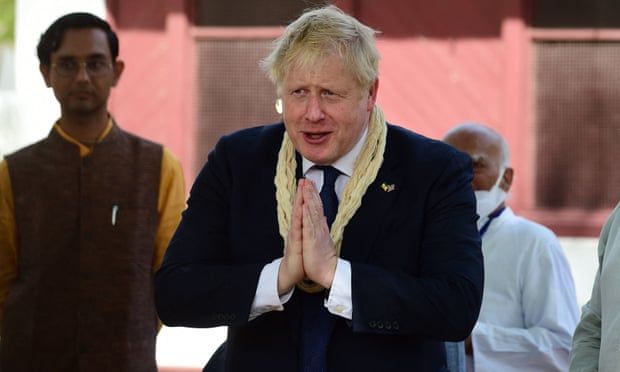 Row over breaching of lockdown laws by Rishi and Johnson who lied to the parliament that they never did so, rumbles on as PM begins two-day visit to discuss “trade and security” (bribe and corruption).

Boris Johnson has insisted MPs should wait for the “full facts” before deciding whether to trigger a fresh investigation into Partygate, as he kicked off a two-day trip to India.

Johnson will discuss trade and security with India’s premier, Narendra Modi, on his first visit to the country since becoming prime minister in 2019. He landed in Ahmedabad and was greeted warmly with multiple bunches of roses. The road into the city centre was lined with billboards featuring large photographs of Johnson.

But the trip risks being overshadowed by the ongoing Partygate row, as MPs prepare to vote on a Labour motion aimed at referring him to parliament’s privileges committee over whether he misled the House of Commons.

Johnson was forced to signal a fresh climbdown on Thursday, as the government dropped a compromise amendment aimed at delaying an investigation by the privileges committee until after the Sue Gray report in to lockdown rule-breaking is published.

“I’m very keen for every possible form of scrutiny and the House of Commons can do whatever it wants to do. But all I would say is I don’t think that should happen until the investigation is completed,” the prime minister said.

He added that MPs should have the “full facts” before taking any action. “Let’s let the investigators do their stuff, and then knock this thing on the head,” he added.

He was speaking on a visit to a new JCB factory in Vadodara, where he toured the facility with Tory donor Lord Bamford, who owns the company. Johnson has repeatedly visited JCB’s UK factories, including to bulldoze through a wall of polystyrene bricks during the 2019 general election campaign.

En route to India, Johnson had played down Partygate, saying he would concentrate on what he said were more pressing matters. “I think politics has taught me one thing – that you’re better off talking about and focusing on the things that matter, the things that make a real difference to the electorate and not about politicians themselves,” he said, adding, “I’m focused on jobs, growth and a fantastic partnership with India.”

Asked whether there were circumstances in which he could resign over Partygate, he said: “Not a lot springs to mind at the moment.”

Instead, Johnson stressed the importance of securing a free trade deal with India, hinting that the UK might be prepared to relax its immigration regime in order to do so.

Two rounds of talks have already taken place, with a third due later this month – and both sides have expressed the hope of securing some kind of deal by the end of 2022.

The conflict in Ukraine also looms large over the visit, although No 10 has insisted Johnson will not “lecture” his host. India, which has a longstanding relationship with Russia, declined to support a UN motion criticising Vladimir Putin’s invasion of Ukraine. 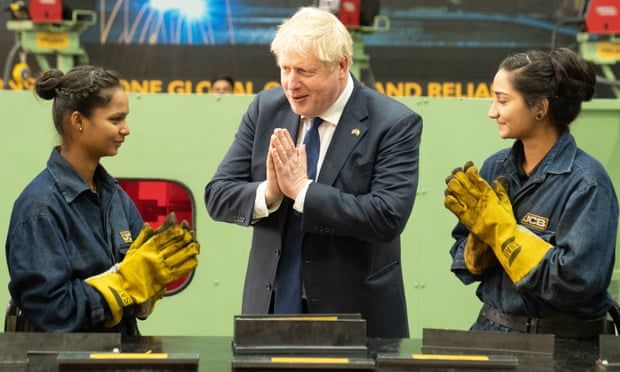 Boris Johnson speaks to workers at a JCB factory in Vadodara, Gujarat, owned by the Tory donor Lord Bamford.

A cabinet minister denied that the move to delay the parliamentary investigation into whether Johnson misled parliament with his repeated denials of Covid law-breaking was a cover-up.

Nadhim Zahawi, the education secretary, said effectively annulling Labour’s motion by putting off letting MPs make a decision until after the Metropolitan police and Whitehall inquiries have concluded was “the right thing to do”.

He told Sky News: “If you want to play politics with this, the shenanigans that Labour are attempting today is the route. If you want to follow due process then you allow the police to do their investigation, you allow the Sue Gray report to be published and then the privileges committee can look at that.”

Zahawi added: “Most of my colleagues who are fair-minded, who believe in due process, will vote for the amendment because it is the right thing to do.”

But Chris Bryant, the Labour chair of the privileges committee who recused himself from any investigation to avoid accusations of a stitch-up, said it was “another Owen Paterson moment”.

Referring to the sleaze row that exploded last autumn after the government forced Tory MPs to let a colleague avoid suspension after breaching lobbying rules, Bryant said party whips were “trying to buy time and lashing themselves to the Johnson mast when they don’t know what waters lie ahead”.

Thousands of miles from the turmoil over his behaviour, Johnson visited the Sabarmati Ashram, where he was presented with a copy of a guide to London written by Mahatma Gandhi. As he read from it, the prime minister said: “Vegetarianism costs far less than meat eating.”

After removing his shoes, Johnson remarked: “There’s always a panic that the socks are going to let you down.”