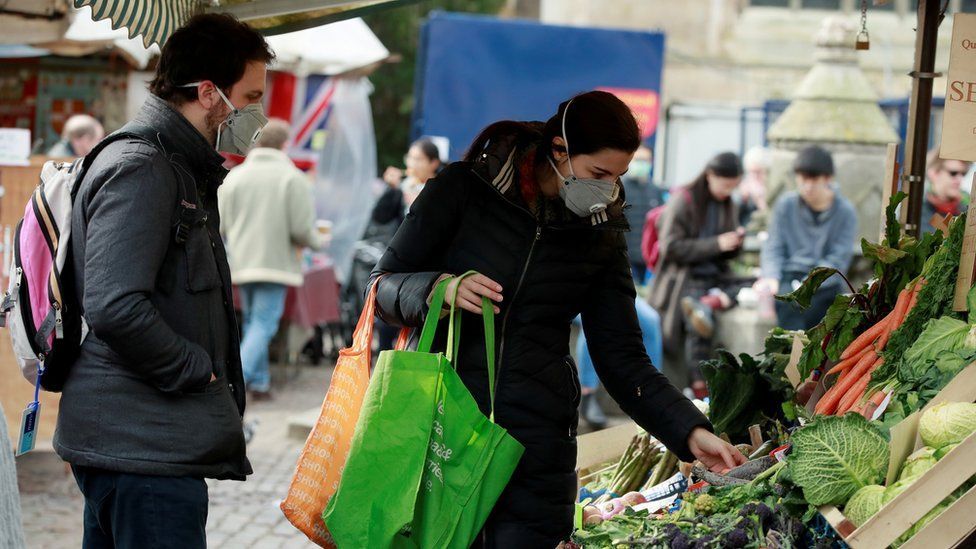 Chancellor Rishi Sunak has warned that a spending spree to support workers and spur investment will be followed by tax rises as the economy recovers.

The UK's rapid Covid-19 vaccine rollout is expected to help the economy get back to its pre-pandemic size six months sooner than previously expected.

Official forecasts expect growth to hit 4% this year, while an extension of the furlough scheme will limit job losses.

The government's independent forecaster, the Office for Budget Responsibility (OBR), said the UK had been at the "vanguard" of the discovery of new and effective vaccines.

It said this will foster a "swifter and more sustained" economic recovery, with the pace of growth expected to strengthen to 7.3% in 2022. 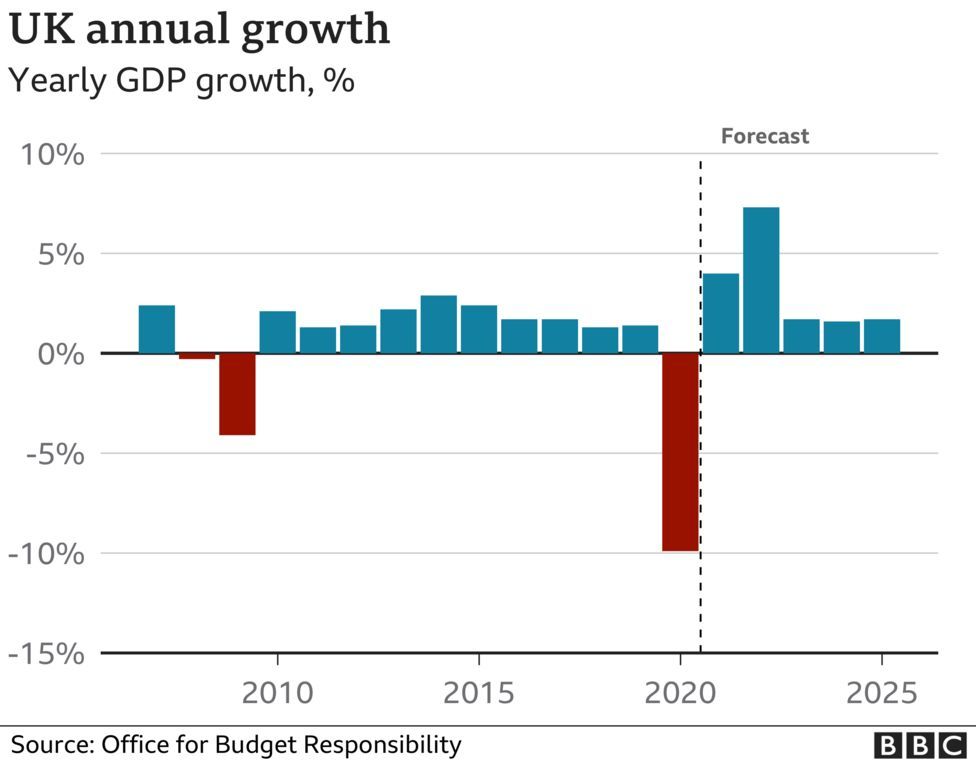 This would be the highest growth rate since official records began in 1949 and help the economy to return to its pre-pandemic size in the middle of next year.

Mr Sunak unveiled plans to spend tens of billions of pounds more over the next two years to support the economic recovery, including tax breaks designed to encourage business investment.

However, the chancellor said tax rises were also needed to help repair the public finances.

Mr Sunak announced that corporation tax will rise from 19% to 25% for large companies in 2023, while day-to-day spending by government departments will be cut by a further £4bn a year.

Mr Sunak said it would be "irresponsible to allow our future borrowing and debt to rise unchecked".

Chris Sanger, head of tax policy at EY, described the Budget as "three years of support, followed by three years (and more) of pain".

Mr Sanger added: "Time [is] the Chancellor's friend in his aim of replenishing the Government's coffers."

The government's target to have all adults vaccinated this summer is expected to pave the way for the lifting of public health restrictions.

The OBR noted that British households had built up a savings war chest of around £180bn in the past year.

It expects a quarter of this to be spent as lockdowns end, saying there could be a "degree of euphoria", especially among better-off households who "treat themselves" when the economy opens up.

The main thrust of this Budget is significant extra immediate crisis support, both in terms of the furlough scheme and self employed support, and a radical "super-deduction" policy to encourage business investment right now.. That is £60bn extra in one year and it comes from borrowed money. That leaves borrowing in the coming financial year significantly higher than expected. A much larger proportion of the exceptional world war-style borrowing over the past year will stay in place in the coming year.

The happy result of this is that unemployment, though rising, peaks at a much lower level than previous expectations, just over 6%, rather than, say, 10%. This is a consequence of both the vaccine rollout and the support package, leading to a reopening of the economy over summer.

The jabs and then the jobs. But then the payback, with a massive rise in £16bn corporation tax and the £8bn changes to thresholds for the last two years of the Parliament. The Conservative manifesto commitments on not increasing VAT, income tax or national insurance are binding here.

So Rishi Sunak is left with the first rise in corporation tax since Dennis Healey's 1974 Budget. It turns a careful strategy of using corporation tax as a lever for foreign investment on its head. For many in the vanguard of the Conservative Brexit movement, very low levels of this tax were one of the building blocks of "Singapore-on-Thames". Singapore is staying in South East Asia.

The timing of this tax rise at the end of a Parliament is not the normal order of things. But the Covid pandemic is far from normal.

However, the watchdog warned that economic uncertainty remained "considerable", and would depend on controlling variants of the virus.

Labour leader Sir Keir Starmer said the chancellor was "betting on a recovery fuelled by a consumer spending blitz".

He added: "The chancellor may think that this is time for a victory lap, but I'm afraid this Budget won't feel so good for the millions of key workers who are having their pay frozen, for the businesses swamped by debt, and the families paying more in council tax."

Unemployment is expected to peak at a lower rate of 6.5%, keeping it well below levels seen during the 2008 financial crisis.

However, this means half a million more people are expected to be out of work by the end of this year. 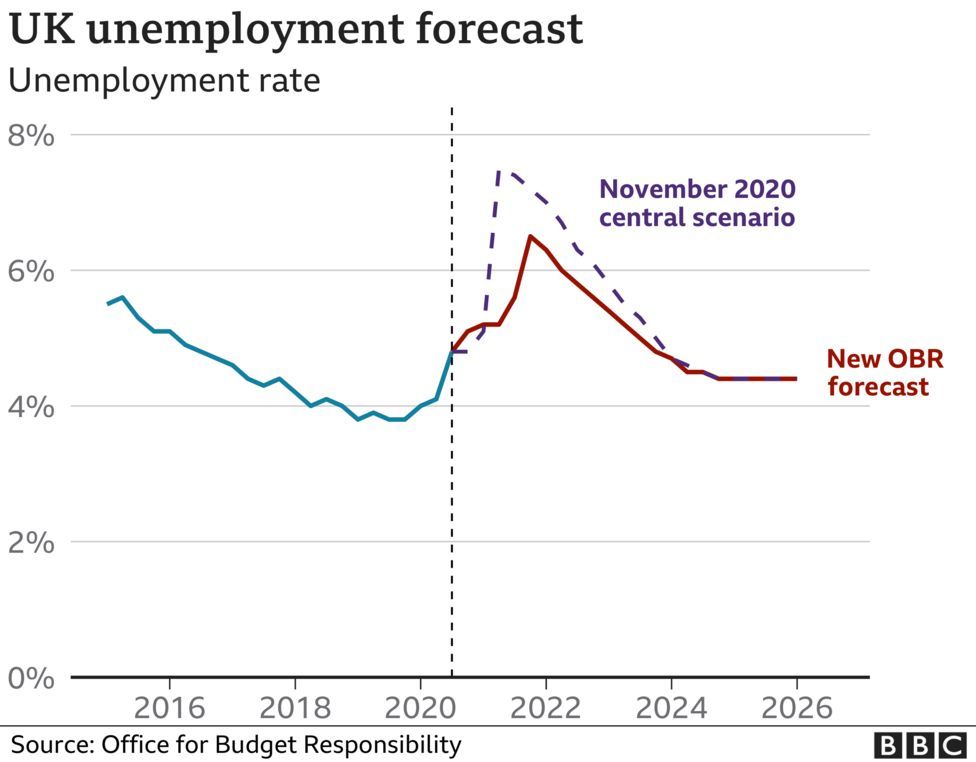 Government borrowing is expected to rise to a peacetime high of £354.6bn this year to help pay for economic support measures.

The size of the UK's debt pile is also expected to remain larger than the economy until at least the middle of the decade.

Mr Sunak said: "It's going to take this country - and the whole world - a long time to recover from this extraordinary economic situation. But we will recover." 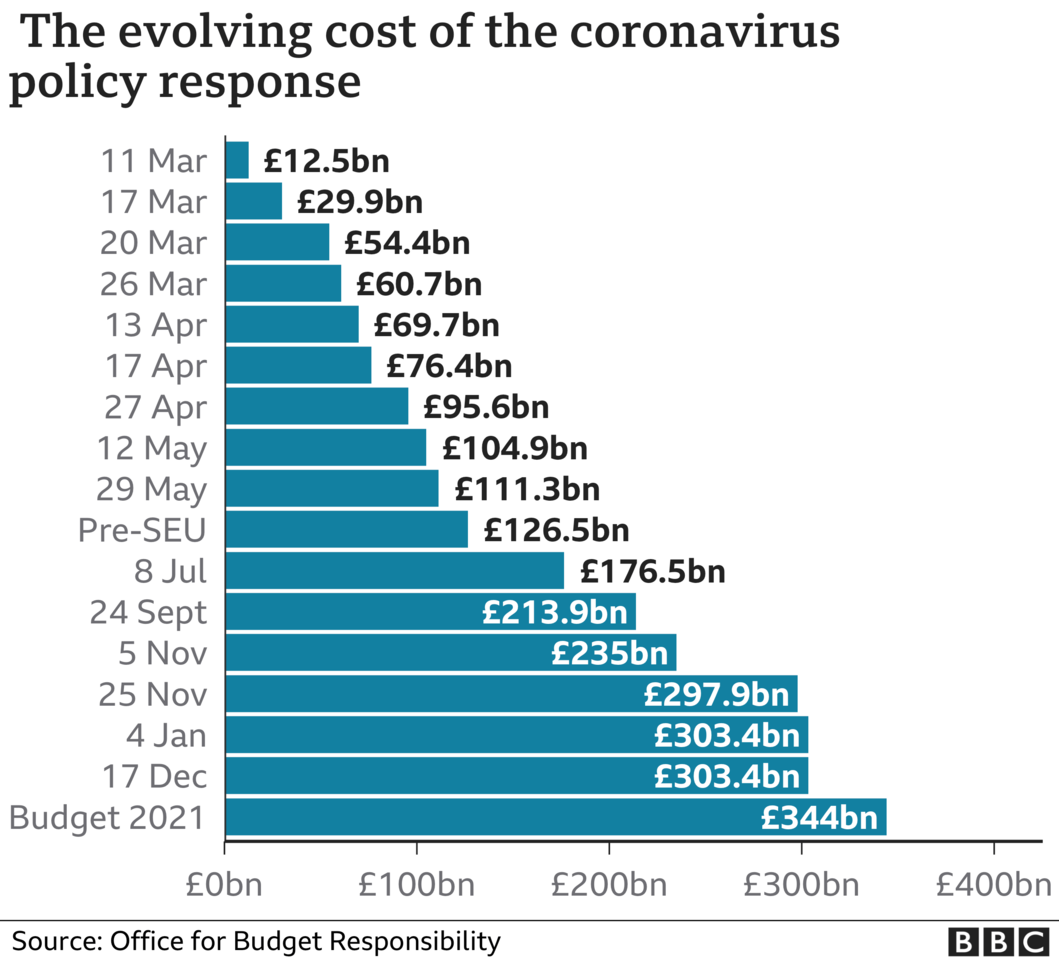 From April, he will also freeze the amount of money employees earn before paying income tax at £12,570 until the middle of the decade.

The OBR estimates an extra 1.3 million people will start to pay income tax by 2026 as a result of the freeze.

The level at which employees start paying the higher, 40% rate of tax will also be frozen at £50,270 from April, dragging an extra million people into the band within five years.