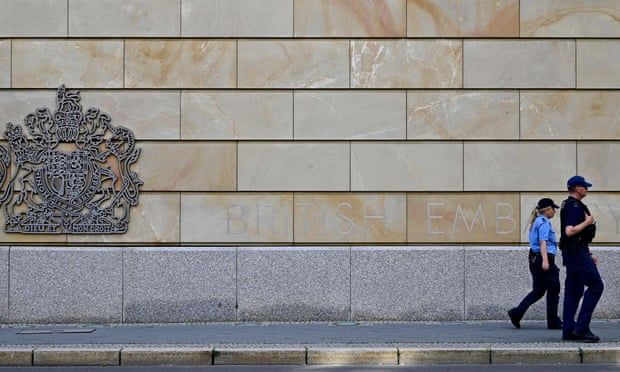 Counter-espionage laws too weak to deal with spies acting against British interests
The British national accused of selling secrets to Russia will not be extradited back home to face justice despite the seriousness of the claims.

Britain’s “archaic” counter-espionage laws have been exposed, say sources, by the arrest of David Smith, 57, a security guard contracted to the Berlin embassy. They say there is little point in bringing him home because the current legislation is too weak to deal with spies acting against British interests.

The case of Smith has thrown a spotlight on the UK’s inability to prosecute foreign agents despite widespread concern about the activities of Russian spies in the wake of the Salisbury nerve agent attack in March 2018 which left victims Sergei and Yulia Skripal in hospital for several weeks.

However, the source added that the situation was being rectified with the government’s Covid-delayed counter-state threats bill which will mean foreign agents working for a country such as Russia have to register when they start working in the UK. Based on the US system, anyone employed on behalf of foreign governments, officials or political parties in future will first have to notify the British authorities.

Smith was motivated by ideology, not money, sources have confirmed.

They indicate that he had rightwing leanings which drove him to help Vladimir Putin’s Russia. Although he received payment for allegedly passing on sensitive documents about British counterterrorism operations, sources say the money was merely an added “bonus”.

Smith is alleged to have been paid a cash bribe to pass information to Russian intelligence and is suspected of at least once passing to a handler documents he had acquired through his work.

According to the website of Der Spiegel, Smith drew the attention of investigators after going for an unusually long time without making payments by card or withdrawing cash. German federal police and public prosecutor investigators concluded that Smith was covering his expenses using cash he had been paid with directly.

Pictures taken from inside his flat last week in Potsdam appear to demonstrate his affinity to the Kremlin with at least two Russian flags alongside scores of military history books, some in Russian.
#Covid
Add Comment