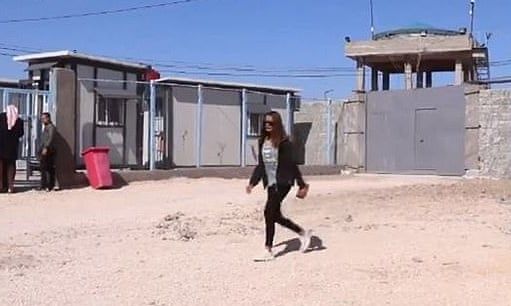 Charity Reprieve criticises government’s ‘abdication of responsibility’ over Shamima Begum
Britain risks creating “a new Guantánamo” in Syria by leaving Shamima Begum and others like her stranded in Syrian detention camps, it has been claimed, after the supreme court rejected Begum’s appeal against a decision to revoke her UK citizenship.

A key figure who has been involved with Begum’s case said the judgment left the 21-year-old in a legal limbo, unable to return to the UK or mount an effective challenge to the deprivation decision remotely.

Maya Foa, the director of the human rights charity Reprieve, said the supreme court had said Begum could in theory still challenge a decision to take away her citizenship, if she could find a way of instructing her lawyers.

“The court has said she can appeal [against] the citizenship decision, but they do not say how it can be done. It leaves her in the hands of the British government, which is unwilling to assist. That is less of a policy and more of an abdication of responsibility – unless the policy is to create a new Guantánamo in Syria,” Foa said.

Begum is understood to have been told of the court judgment, although very little of her personal story featured during the case. Supporters say she regrets her decision to leave the UK and is remorseful about her actions.

They argue that she was a minor when she was a victim of trafficking and was unable to leave Syria after she arrived in 2015, until she was detained by Kurdish fighters as the last of Islamic State’s territory was captured.

Her legal team has yet to decide what it might do next, including whether it will appeal to the European court of human rights.

An estimated 24 adults and 35 children who left Britain to join Isis are still detained in Syria at one of several camps run by Syrian Kurds, where conditions have been described as dire. Many of them have had their UK citizenship removed.

On Friday the supreme court decided unanimously to rule in favour of the home secretary and against Begum on all counts, in the latest stage of a long-running legal battle.

It means the 21-year-old will not be allowed to re-enter the UK to fight her case in person and cannot have her citizenship restored while she is detained in her current conditions, where she is unable to access a lawyer.

Lord Reed, the president of the supreme court, concluded that the lower court of appeal had substituted its own reasoning in place of the home secretary’s when deciding that Begum should be allowed to return to the UK to challenge the loss of her citizenship last July.

A two-day oral hearing in the case in November heard that Begum was still considered by MI5 as a national security risk because although she had travelled out as a minor, she had “aligned” herself with Isis.

But Reed’s judgment held out one remaining hope for Begum, concluding that the only fair response was for any final appeal against the decision to revoke her British citizenship to be held over until “Begum is in a position to play an effective part in it without the safety of the public being compromised”.

“That is not a perfect solution, as it is not known how long it may be before that is possible,” Reed said.

The conditions of Begum’s detention in a camp where she has been threatened with violence if she uses a mobile phone makes that unlikely without political intervention from the UK or elsewhere.

Begum was 15 when she left east London with two schoolfriends to join Isis in Syria six years ago. Although born and raised in the UK, Begum’s British citizenship was removed in 2019 by the then home secretary, Sajid Javid, shortly after she was found by a journalist in a prison camp.

Javid argued that she was eligible for Bangladeshi citizenship, the birth country of her parents.

Priti Patel, the home secretary, said ministerial authority had been affirmed by the court. “The government will always take the strongest possible action to protect our national security and our priority remains maintaining the safety and security of our citizens,” she said.

As a teenager, Begum was married to an Isis fighter while she was embroiled in the Syrian conflict and had three children, all of whom have died. As Isis was defeated, she was captured by the Syrian Kurds in 2019 and has remained in detention without trial ever since.

Intelligence agencies estimate that 900 Britons travelled to Syria or Iraq to join Isis. Of these about 20% were killed and 40% returned home. The remainder are either missing or held in Kurdish camps, their UK citizenship often having been removed.
#Priti Patel
Add Comment