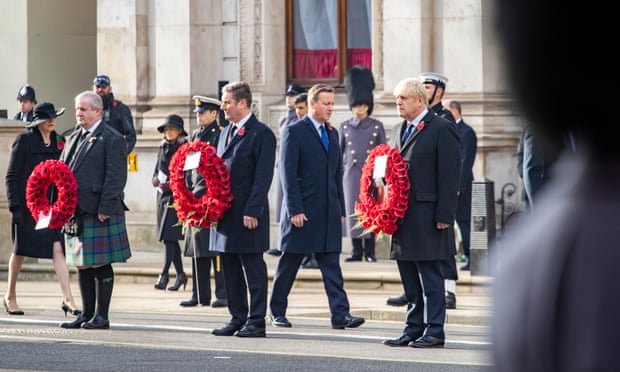 Britain marked a series of scaled back Remembrance Sunday events, with only a handful of veterans marching past the Cenotaph in central London because of the restrictions imposed by the pandemic.

The Queen observed from a balcony at the Foreign and Commonwealth Office, while politicians and members of the royal family laid wreaths in Whitehall at a special socially distanced event at which crowds were banned.

Normally 10,000 people pack into Whitehall, while many others attend march-pasts and wreath-laying events around the country. But this year, about 30 veterans took part in a small march-past after the wreath-laying had concluded.

Instead the public were encouraged to watch on television, observe the two-minute silence at home or in their gardens, and display poppies in their windows, while a few veterans attended alternative events.

Retired army colonnel Jack Stenhouse, 72, said it was “essential” the tradition of Remembrance continued, where he laid a wreath at the National Memorial Arboretum in Staffordshire on behalf of the Gordon Highlanders regiment. 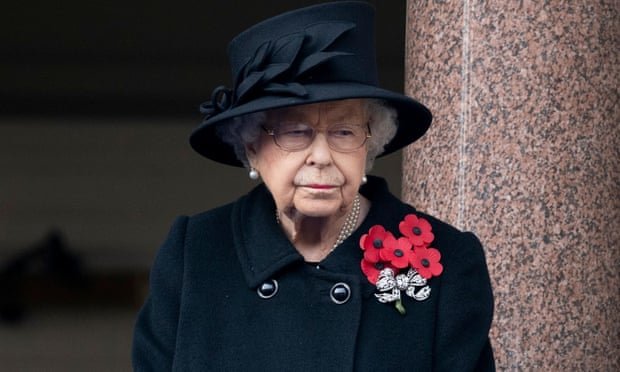 The Queen observed from a balcony at the Foreign and Commonwealth Office.

“One would hope that this would never be forgotten,” he said. “The danger of the pandemic is some of these traditions are broken, the rhythm is broken and it may be difficult to get them started again. But I suspect Remembrance Sunday will always be with us.”

In London, Prince Charles laid a wreath on behalf of the 94-year-old monarch, followed by Prince William, Boris Johnson and Keir Starmer.

Other wreaths were laid by four former prime ministers, John Major, Tony Blair, David Cameron and Theresa May. The ambassador of Nepal, Durga Bahadur Sabedi, also laid a wreath, on behalf of Gurkha veterans, only the second time a representative of the country has been asked to participate.

“In this time of adversity, no virus can stop us from honouring their memory, particularly when we have just celebrated the 75th anniversary of victory in the second world war,” Johnson said before the ceremony.

Neither the 99-year-old Philip, the Duke of Edinburgh, was present, nor was Prince Andrew, who has stepped down from royal duties amid fierce criticism over his relationship with the late Jeffrey Epstein, or Harry, the Duke of Sussex. 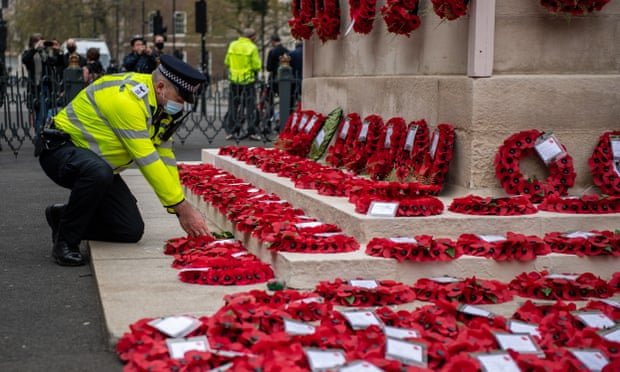 A police officer lays wreaths at The Cenotaph in central London on Sunday.

Harry, a veteran of two tours of Afghanistan, had hoped to lay a wreath but his request is understood to have been turned down by the palace because he had stepped down from his official roles when he relocated to California with his wife Megan in March.

Instead the duke gave an interview to the Declassified podcast. “Being able to wear my uniform, being able to stand up in service of one’s country, these are amongst the greatest honours there are in life,” he said.

“To me, the uniform is a symbol of something much bigger, it’s symbolic of our commitment to protecting our country, as well as protecting our values.”

Gen Sir Nick Carter, chief of the defence staff, said some veterans might find Remembrance Sunday a lonely experience this year. “They traditionally have had the opportunity to get together and talk about their memories and their reflections, but equally to strut their stuff,” he said.

This year was the first year that face-to-face poppy collection had been cancelled – the fundraising effort had taken place every year during the second world war – but the British Legion said it hoped the public would be able to contribute online. The veterans’ charity normally raises £50m a year, and is still seeking donations until Armistice Day on Wednesday.