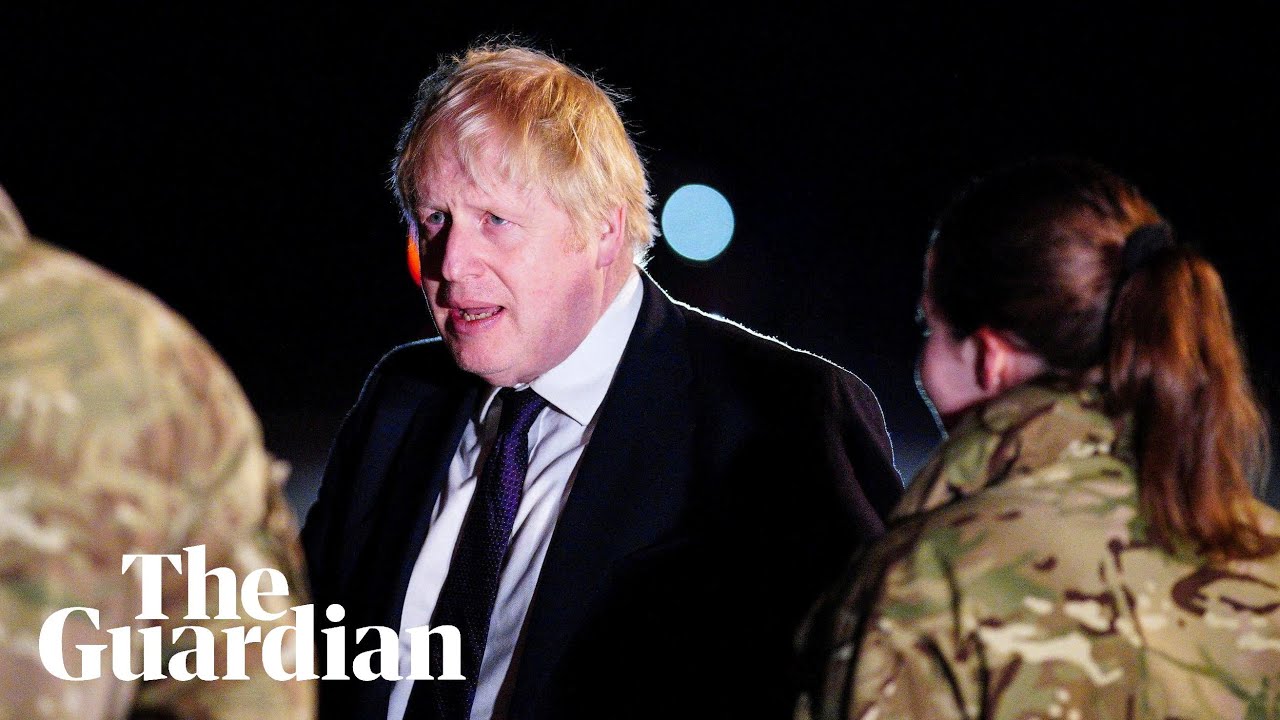 Boris Johnson warns of ‘very grim days ahead for Ukraine’

Prime minister says UK has to do everything it can to change ‘heavy odds’ country faces
Boris Johnson has said there are some “very grim days ahead for Ukraine”.

Speaking at RAF Brize Norton in Oxfordshire on Saturday night, the prime minister said he had “just come off the phone” to Ukraine’s president, Volodymyr Zelenskiy.

“Let’s be in no doubt, things are not going all the way of President Putin, very far from it,” he said. “The Ukrainians are fighting heroically, and in some places with great success, as many of us thought they would because they’re a great country and a very brave country.

“But as you rightly point out, there are some terrible atrocities being committed and there will be some very grim days ahead for Ukraine. We’ve got to do everything we can to change the heavy odds that Ukraine faces and to help them, and so that’s why we’re sending humanitarian supplies, we’re sending financial supplies and military supplies as well.”

Johnson also said there was growing support to ban Russia from the Swift banking system. Shortly after his statement it was announced that the UK, EU, US and Canada would remove “selected Russian banks” from Swift.

At the Oxfordshire airbase, he said: “You ask: ‘should we do more?’ The answer is yes. And we need to make sure that we apply those much tougher economic sanctions, including Swift, and what’s starting to happen is that the horror of what is unfolding in Ukraine is becoming clear to western audiences, and that is, in turn, putting huge pressure on western politicians.

He added: “Swift is the mechanism that stops people making payments to Vladimir Putin’s Russia. It’s incredibly important for tightening the ligature, the economic ligature around the Putin regime.”

Johnson said that Vladimir Putin’s engagement in diplomacy had been a “charade”.

“I think we have to face the hideous reality that the diplomacy, as far as President Putin was concerned, was a charade,” he said.

“He never really intended to alter his course. You read the article that he wrote many months ago – it was clear that he’s attached to a weird, semi-mystical view of Ukraine as part of Russia.

“And that is a view that the Ukrainian people fervently, passionately reject and they’re showing that they will fight to reject it. Our job now is to help them, to help change the very heavy odds they face and that’s why we’re sending the support that we are.”

When pushed on whether the UK would take refugees fleeing from the conflict Johnson insisted: “Of course we’re going to take refugees … The UK is way out in front in our willingness to help with refugees. We’ve sent 1,000 troops to the theatre, to be ready to help with the influx and, of course, we will help people fleeing in fear of their lives.”

When asked if there was frustration at countries such as China abstaining rather than voting to condemn Russia’s illegal invasion at the UN security council, Johnson said there was a growing sense of “disgust” at the actions of Russia.

“I think what you’re seeing today and over the last few hours is a sense around the world that this is a horror that they simply hadn’t expected,” he said. “And I think that feeling is strong and growing not just in countries in the middle ground, but in Russia itself.”

With regard to whether the UK should break off sporting connections with Russia following Poland and Sweden’s refusal to play the national football team in the World Cup play-offs, Johnson added: “It’s a sad thing because I don’t think we’ve had a situation like this for a very, very long time, but it’s inconceivable to me to imagine that normal sporting relations with Putin’s Russia can continue.”
#Boris Johnson  #Johnson
Add Comment