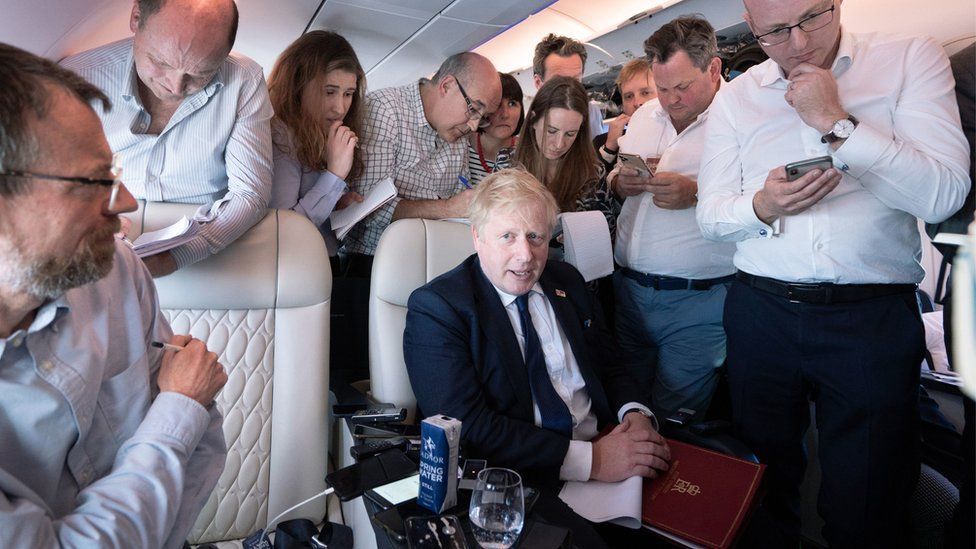 The government will attempt to delay a decision over an investigation into whether Boris Johnson misled MPs about lockdown parties.

MPs were set to vote on Thursday on a Labour plan for a Commons committee to investigate his past comments about Whitehall gatherings.

But ministers now say that vote should wait until probes by the Met Police and civil servant Sue Gray have finished.

Some rebel Tory MPs were threatening to vote with Labour, or not at all.

A Labour source said the government "obviously knew that they couldn't vote this down" - and MPs backing the government would be "voting for a cover-up".

Speaking while travelling to India for an official trip, Mr Johnson told reporters he will fight the next general election and refused to say if there were any circumstances under which he would resign.

Asked if he would submit himself to the committee for investigation, the PM said it was best to wait for the police to conclude their inquires and Ms Gray to "have her final say".

"I think the best thing that we can all do is focus on the things that really change and improve the lives of voters and stop talking about politicians," he added.

Along with his wife Carrie and Chancellor Rishi Sunak, the PM was fined for breaking Covid laws at a June 2020 birthday party for him in No 10.

He had previously told MPs that no Covid laws were broken in Downing Street - leading opposition parties to accuse him of having misled Parliament.

Mr Johnson has denied knowingly misleading MPs - a charge that is a resigning matter under the ministerial rulebook.

Labour's plan - which was supported by other opposition parties - aimed to have the Commons privileges committee launch an inquiry into whether he had.

But the government has now tabled its own amendment to Labour's proposal, to say a vote on whether they should investigate should wait until the police have concluded their investigations and Ms Gray has published her report.

Conservative MPs will be ordered to vote for it - meaning it is highly likely to pass given the government's Commons majority. However Mr Johnson will miss the vote himself as he is making an official trip to India.

No 10 insiders say they were confident they could have killed off an inquiry on Thursday - and not enough Tory MPs were prepared to rebel against the government.

But there was clearly anxiety among Tory MPs about being forced to publicly block an investigation.

Which one of them wanted to have their face displayed on social media ads and leaflets in May's local elections, accused of taking part in a "stitch-up"?

The bet ministers are making is that once the Met investigation and Sue Gray's report are finished and published, there may not be appetite for yet another investigation into lockdown parties.

All they've done for now is delay the decision on whether the prime minister should face investigation, not killed it off completely.

It's a gamble, it seems, they are willing to make.

Mr Johnson is known to have attended at least two further events of the 12 being investigated by police, meaning he could be fined again.

Apologising for his fine on Tuesday, he said he respected the police's decision but argued that he did not think he was breaking the law at the time.

Sir Keir Starmer called his apology a "joke" and accused him of offering "insulting" and "absurd" excuses for his Covid fine.

Under Labour's plan, the privileges committee - made up of seven MPs - would have begun a probe after the Met inquiry has concluded.

The committee, which has a Tory majority, would determine whether the PM had committed a "contempt" of Parliament by misleading MPs.

The committee can ask for witnesses to give evidence and produce documents as part of its inquiries.

It can also recommend sanctions including suspension of an MP - although this requires the approval of the whole House of Commons.

What has the PM told MPs about parties?

When asked whether there was a party in Downing Street on 18 December 2020, Boris Johnson told the Commons on 1 December 2021 that "all guidance was followed completely in No 10".

After the publication of a video showing No 10 staff joking about the 18 December event, he told MPs on 8 December 2021 he had been "repeatedly assured" that "there was no party and that no Covid rules were broken".

Later that day, he told the Commons he was "sure that whatever happened, the guidance was followed and the rules were followed at all times".

On 12 January 2022, he apologised for attending a Downing Street garden party on 20 May 2020 but said he had "believed implicitly" it was a work event.

Watch: What has the PM said before about alleged No 10 parties?
#Boris Johnson  #Johnson  #Covid
Add Comment