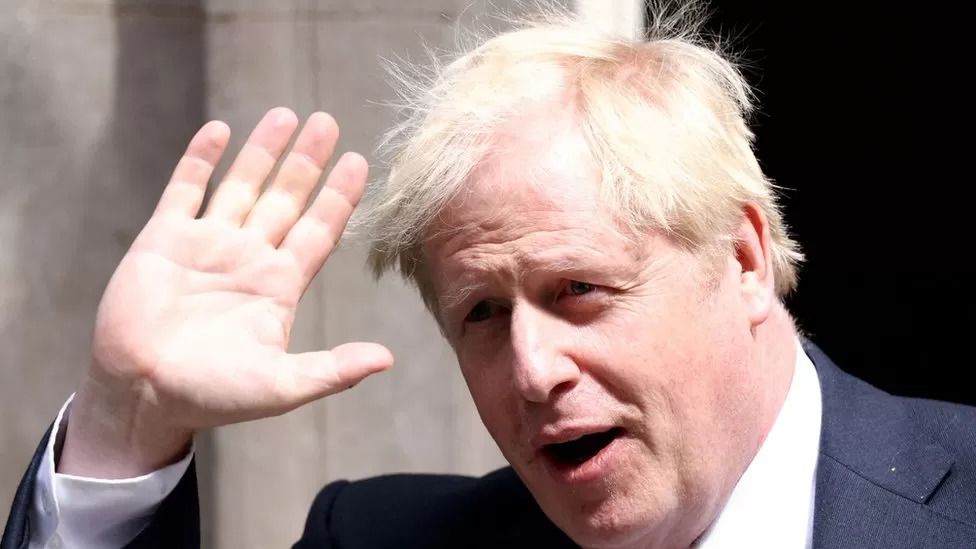 Former PM Boris Johnson has pulled out of the Tory leadership race, saying he had the support needed to stand but it would not be "the right thing to do".
Former chancellor Rishi Sunak and cabinet minister Penny Mordaunt remain in the contest - with Mr Sunak way ahead on publicly declared support.

Mr Johnson said there was a "very good chance" he would have been successful, and "back in Downing Street on Friday".

But he said there needed to be "a united party in Parliament".

The race began on Thursday after Liz Truss resigned as prime minister after 45 days in the job. Nominations for the ballot close on Monday afternoon, and candidates need the support of at least 100 Conservative MPs to go forward.

The latest tally of publicly declared backers counted by the BBC puts Mr Sunak on 155 and Ms Mordaunt on 25. Mr Johnson had 54, according to this tally - although on Sunday evening he said he had 102.

The former prime minister said he had been attracted by the race because "I led our party into a massive election victory less than three years ago - and I believe I am therefore uniquely placed to avert a general election now.

"A general election would be a further disastrous distraction just when the government must focus on the economic pressures faced by families across the country."

He added: "I believe I am well placed to deliver a Conservative victory in 2024 - and tonight I can confirm that I have cleared the very high hurdle of 102 nominations, including a proposer and a seconder, and I could put my nomination in tomorrow.

"There is a very good chance that I would be successful in the election with Conservative Party members - and that I could indeed be back in Downing Street on Friday.

"But in the course of the last days I have sadly come to the conclusion that this would simply not be the right thing to do.

"You can't govern effectively unless you have a united party in Parliament."

He said he had reached out to both Mr Sunak and Ms Mordaunt because he had "hoped that we could come together in the national interest - we have sadly not been able to work out a way of doing this.

"Therefore I am afraid the best thing is that I do not allow my nomination to go forward and commit my support to whoever succeeds.

"I believe I have much to offer but I am afraid that this is simply not the right time."

Mr Sunak tweeted that "we will always be grateful" for Mr Johnson's work in office, including the delivery of Brexit and the vaccine rollout.

"Although he has decided not to run for PM again, I truly hope he continues to contribute to public life at home and abroad," he wrote.

And while Mr Sunak forges ahead as the frontrunner, sources close to the ex-chancellor said "we are not taking anything for granted".

"Rishi will be continuing to talk to colleagues tomorrow morning before nomination papers go in, and discussing how best to unite the party and take the country forward," they told the BBC.

Mr Johnson became prime minister after winning the election in 2019 but resigned in July after a revolt by cabinet ministers over his leadership.

Liz Truss succeeded him as the UK's 56th prime minister, claiming victory over Rishi Sunak in a leadership contest over the summer.