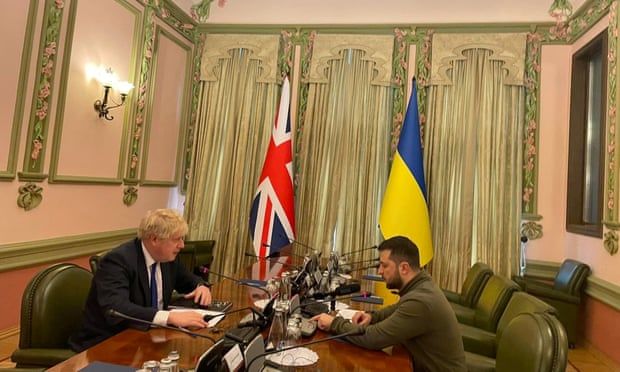 Two leaders will ‘discuss UK’s long-term support to Ukraine’ and Johnson will set out new aid package, says No 10

Boris Johnson is meeting the Ukrainian president Volodymyr Zelenskiy during an unannounced visit to Kyiv, Ukrainian officials have said.

A picture posted on Twitter by the embassy of Ukraine to the UK showed the two leaders sitting across a table in the capital, with their respective flags in the background.

The embassy tweeted the photo along with the caption: “Surprise”.

A No 10 spokesperson said the prime minister was using the unannounced visit to set out a new package of financial and military aid.

“The prime minister has travelled to Ukraine to meet President Zelenskiy in person, in a show of solidarity with the Ukrainian people,” the spokesperson said.

“They will discuss the UK’s long-term support to Ukraine and the PM will set out a new package of financial and military aid.”

Johnson’s visit comes the day after he announced a further £100m worth of UK military assistance for Ukrainian forces, including anti-tank and anti-aircraft weaponry and so-called “suicide drones”, which loiter over the battlefield before attacking their target.

Johnson’s trip to Kyiv may be seen as a publicity coup for the prime minister, who has reportedly been “desperate” to travel to Ukraine.

The security situation in the capital has stabilised after Russian forces withdrew from their forward positions on 29 March. They abandoned the towns of Bucha and Hostomel north-west of Kyiv and retreated to Belarus.

Since then artillery attacks on the city have stopped. Emergency teams have swept highways and roadsides for explosives and have been towing away destroyed Russian armoured vehicles.

With air travel impossible, Johnson will have driven to Kyiv, most probably from eastern Poland. The 400 mile route from the border passes the western city of Lviv. On the outskirts of the capital Johnson will have seen blown-up Russian tanks by the side of the road, as well as ironic welcoming signs painted by Ukrainians saying: “Russia go fuck yourself”.

Johnson is a popular figure in Kyiv after having delivered vital anti-tank weapons, the Swedish-made NLAW system, to the Ukrainian army. Zelenskiy has repeatedly praised the UK’s staunch support.

A growing number of senior politicians are now making the trip. On Friday the European Commission president, Ursula von der Leyen, visited with her deputy, Josep Borrell. Both condemned the Russian rocket attack on a train station in the eastern city of Kramatorsk.

Johnson travelled to Kyiv on 1 February before the invasion and held talks with Zelenskiy in the Mariinsky Palace, the president’s official residence.

He said then the UK would impose sanctions on Russia as soon as the “first Russian toecap” strode into Ukrainian territory. He also warned – correctly – that Russia’s armed forces were a “clear and present danger”.

It was reported last month that Johnson wanted to go to Kyiv, but that UK security officials were nervous about the prospect.

At the time, the Tory co-chair Oliver Dowden claimed the prime minister was “desperate to go to Ukraine” and had a “real emotional connection” with the Ukrainian people. Downing Street sources indicated at the time that a visit was unlikely to happen.

The visit comes after Zelenskiy called on Ukraine’s allies to provide the country with more military aid and step up sanctions on Russia, after the missile attack in Kramatorsk that killed at least 50 people, including five children. Russia’s defence ministry denied responsibility.

“Six-hundred million of those will go to Ukraine, to the Ukrainian authorities and partially to the United Nations,” Von der Leyen said at a fundraising event for Ukraine in Warsaw.

“And €400m will go to the frontline states that are doing such an outstanding job and helping the refugees that are coming.”