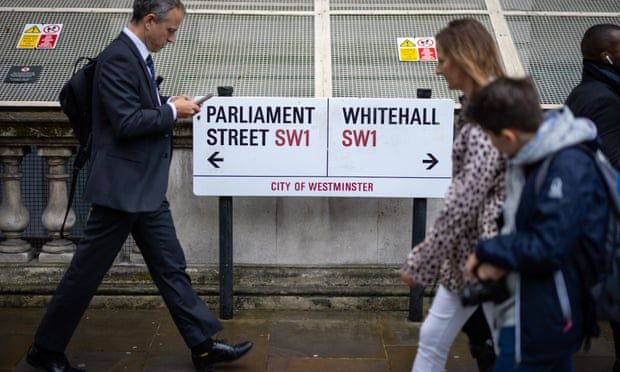 Following the announcement that the civil service’s flagship graduate scheme was to be frozen for at least a year to help reduce head count by 20%, the prime minister tried to assure officials that support would be provided to “anyone affected”.

Johnson argued that given Britain had left the European Union and the Covid pandemic was subsiding, “we no longer require the state to have the same colossal presence in people’s lives”.

“We must ensure the cost of government is no greater than absolutely necessary to deliver for the people we serve,” he wrote. “And as many families and businesses now look at how to reduce their costs in a period of higher global inflation, it is right that we do the same.”

Cabinet ministers were told on Monday they had a month to come up with plans for reducing headcounts in their department by up to 20% and that they should “show discipline in your recruitment”.

The Guardian revealed last week that Department for Environment, Food and Rural Affairs (Defra) had already initiated an effective recruitment freeze and warned redundancies could not be ruled out.

Senior Whitehall sources said they hoped not to have to axe any jobs, but rather fulfil the reduction of 91,000 personnel by hiring fewer people to replace those leaving the civil service.

After it was revealed the graduate scheme, which recruits about 1,500 university-leavers a year, was being paused for at least a year, a Cabinet Office insider dismissed suggestions the scheme had been singled out.

“This is not an exceptional issue,” they said, suggesting ministers wanted to “take advantage of churn in the civil service for a year or two”.

The decision to the graduate scheme was made at a cabinet meeting earlier in May, and then confirmed at a Cabinet Office board meeting on 19 May, chaired by Stephen Barclay, the prime minister’s chief of staff.

The programme is made up of 15 individual schemes, and graduates with a minimum degree result of 2:2 are able to apply.

Simon Case, the cabinet secretary, had sent a letter to civil servants in which he acknowledged that although the job cuts would be “challenging”, civil service staffing levels had risen significantly since 2016, partly due to the coronavirus pandemic.

The government also said it had not completely ruled out a recruitment freeze or compulsory redundancies in order to reduce staffing levels. However, the decision to pause the civil service fast stream has faced criticism.

Alex Thomas, a programme director at the Institute for Government thinktank, said: “Pausing the fast stream as a way for the civil service to bring in new talent from different backgrounds risks cutting off the supply of people who have the digital and project management skills to improve public services.

“Focusing on headcount reductions rather than budget savings can create perverse incentives, skewing towards losing the cheaper and younger talent rather than making bigger efficiencies elsewhere.”

The biggest civil service union warned of potential strike action after plans for job cuts were announced, with Mark Serwotka, the general secretary of the Public and Commercial Services union (PCS), saying the civil service had reached a “tipping point” and that national strike action was realistic.

He added that the civil service was already struggling with a backlog of passports, driving licences, court cases and pension payments due to “chronic understaffing and a recruitment crisis”.
#Boris Johnson  #Coronavirus  #Johnson  #Covid
Add Comment