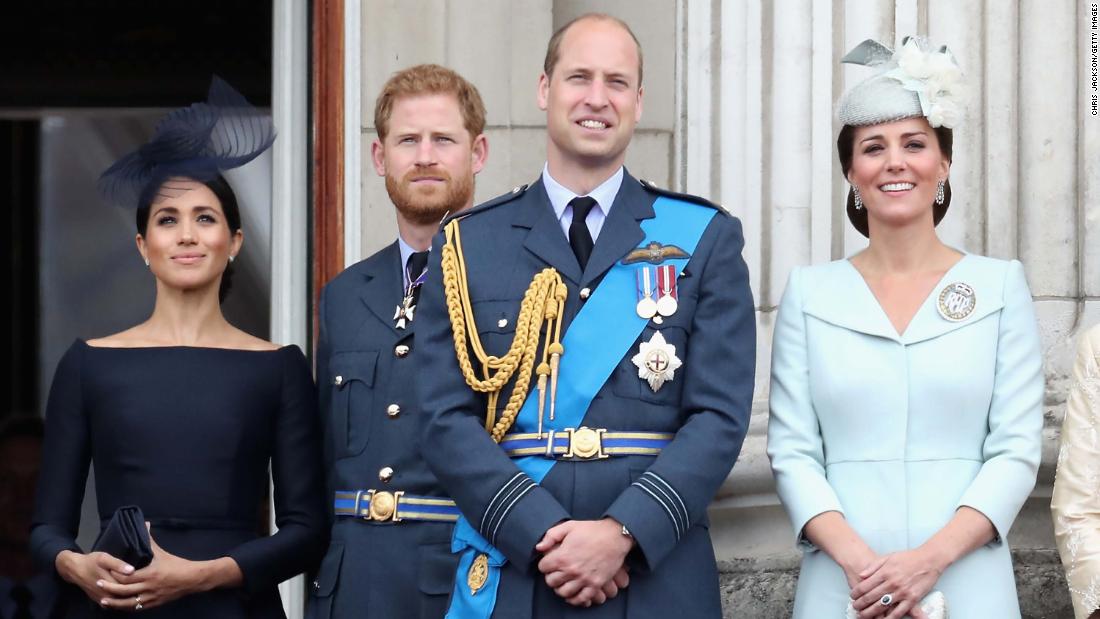 As royal briefing wars continue between London and California, can Prince Philip mend the rift?

If Oprah's interview with Meghan and Harry exposed deep wounds in British royalty, then they are going to take longer to heal than many viewers may have hoped.

As fallout from the revelations that came to light during the broadcast entered a second week, the first signs of progress emerged when royal sources revealed to The Times of London that brothers Harry and William had "been in contact" since the interview aired.

But then the article went on to repeat and stoke bullying claims made against the Duchess of Sussex.

A royal source told the newspaper: "The actual worst incidences haven't come out. There are some harrowing stories to tell."

Unnamed figures described as "allies of the Prince of Wales" accused Harry of "hypocrisy" and challenged his claims that his father had "cut him off" financially.

It's exactly the type of palace briefing the Sussexes have complained about and they didn't take it lying down.

Gayle King, a friend of the couple, was soon dispatched to defend them publicly. The CBS breakfast host confirmed Tuesday Harry had spoken to his family but "the word I was given was those conversations were not productive."

King also suggested the couple were upset that "the palace keeps saying they want to work it out privately, but yet they believe false stories are coming out that are very disparaging against Meghan still. No one in the Royal Family has talked to Meghan yet."

Harry and Meghan want to "move forward" and see "healing in this family," King said, though it's difficult to see that happening if the two sides can't even pick up the phone without the news leaking.

Both sides are in plain breach of the Queen's crystal-clear on-the-record statement that the issues raised in the Oprah interview "are taken very seriously and will be addressed by the family privately." 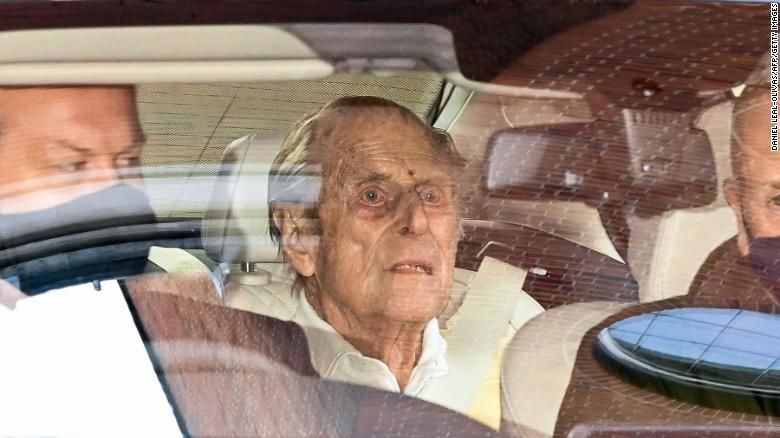 You can only imagine what Prince Philip thinks of all this. As patriarch of the family, he's known to take the lead on private family issues while the Queen deals with matters of state, but he's been indisposed in hospital for a month.

He wouldn't have been totally out of the loop, but he is now back at the Queen's side at Windsor Castle and in "good spirits," we're told. Is this now his moment to take charge and at least end the public nature of what many in his generation view as a very unseemly row?

He is of course known for his directness but he's also frail, still in recovery from heart surgery and soon to turn 100 years of age.

There are serious matters at play here and the stakes are high for the future of the monarchy, but the healing that Harry talks about can only begin with a conversation between him, his brother and father and at the moment the trust just doesn't appear to be there.

NEWS OF THE WEEK

The Palace acts over bullying claims

Buckingham Palace has brought in an external law firm to investigate claims that Meghan bullied royal staff during her time at Kensington Palace, CNN understands. A spokesman for Buckingham Palace reaffirmed that action was being taken to probe the allegations "but we will not be providing a public commentary on it." CNN was not told which firm would be involved in the inquiry. A spokesperson for the Sussexes previously rejected the bullying accusations as "a calculated smear campaign" and "defamatory." The Palace's aggressive plan to probe the report contrasts starkly with its approach towards Meghan's allegation against a senior royal of racism, which the family said it would keep in-house.

Catherine, Duchess of Cambridge is facing both praise and criticism for visiting a memorial for Sarah Everard in south London last Saturday. Everard, 33, disappeared on March 3 while walking home from a friend's house at night and her body was later found in woodland. A police officer charged with her kidnap and murder is due to stand trial in October. The case has sparked a national debate in the UK over women's safety, sexual assault and harassment.

Catherine was spotted on Saturday quietly laying flowers at a bandstand near to where Everard disappeared. Catherine wanted to pay her respects to Everard and her family as she remembers what it felt like to walk around London at night before she got married, a royal source said of the visit. In the days since, some have criticized her for failing to wear a Covid mask while others have questioned if the royal broke restrictions to make the unannounced appearance as she lives at Anmer Hall in Norfolk, eastern England, about 100 miles north of London.

FROM THE ROYAL VAULT

The Queen sent a celebratory message to Irish President Michael D. Higgins on Tuesday to mark St Patrick's Day and recalled her historic visit to Ireland a decade ago.

"On the occasion of your National Day, I would like to convey to Your Excellency my congratulations, together with my best wishes to the people of Ireland," the 94-year-old monarch's message began.

"This year marks ten years since my visit to Ireland, which I remember fondly, and it marks a significant centenary across these islands. We share ties of family, friendship and affection -- the foundation of our partnership that remains as important today as ten years ago."

She ended the message: "Lá Fhéile Pádraig sona daoibh go léir" -- which translates to "Happy St. Patrick's Day to you all." 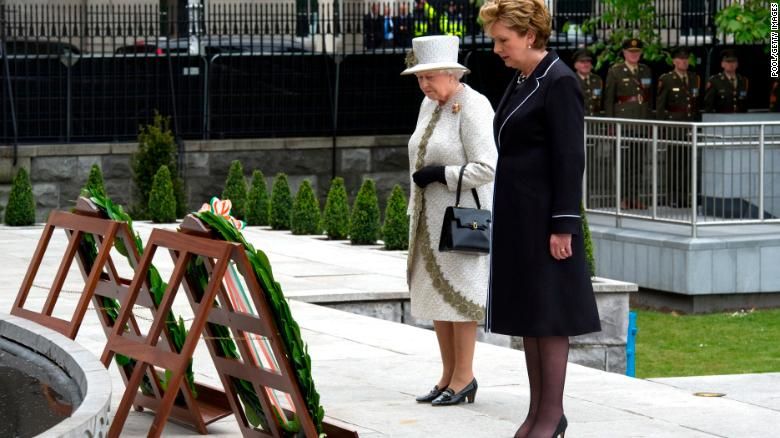 Queen Elizabeth and then-Irish President Mary McAleese laid a wreath at the Garden of Remembrance during the historic visit to Ireland in 2011.

The Queen's 2011 tour of the Republic of Ireland was the first visit by a reigning British monarch since it gained independence from London in 1921. The countries may be right next to each other, but Ireland's relationship with the Crown has been difficult to say the least.

The neighboring countries share a troubled, often violent, history during which thousands have died, including Lord Mountbatten, a relative of the Queen who was killed by an Irish Republican Army (IRA) bomb, while fishing along with two teenagers, in 1979.

Tensions had been improving since the signing of the Good Friday Agreement in 1998 and her trip went some way to healing old wounds. It was seen by some as a new era in relations between the two nations with then-British Prime Minister David Cameron describing it at the time as a game-changer.

It's an example of the Queen's soft power, which the British Foreign Office views as a unique weapon in its diplomatic arsenal.

A WORD FROM THE ROYALS

"We know that for Irish people all around the world, today won't be the same as normal. We hope you can celebrate safely."

The Queen wasn't the only royal to celebrate St Patrick's Day this year. The Cambridges took part in a video shared by the Irish Foreign Ministry on Wednesday. Sporting obligatory green garb for the occasion, William started their message, saying "Beannachtaí na Féile Pádraig oraibh" (which means "Happy St Patrick's Day" in Irish!)

Catherine followed him, saying: "We're delighted to wish you all a very happy St Patrick's Day." Feeling slighted that his wife's script was perhaps a little less challenging, William jokingly mused: "How come you got that easy bit?"