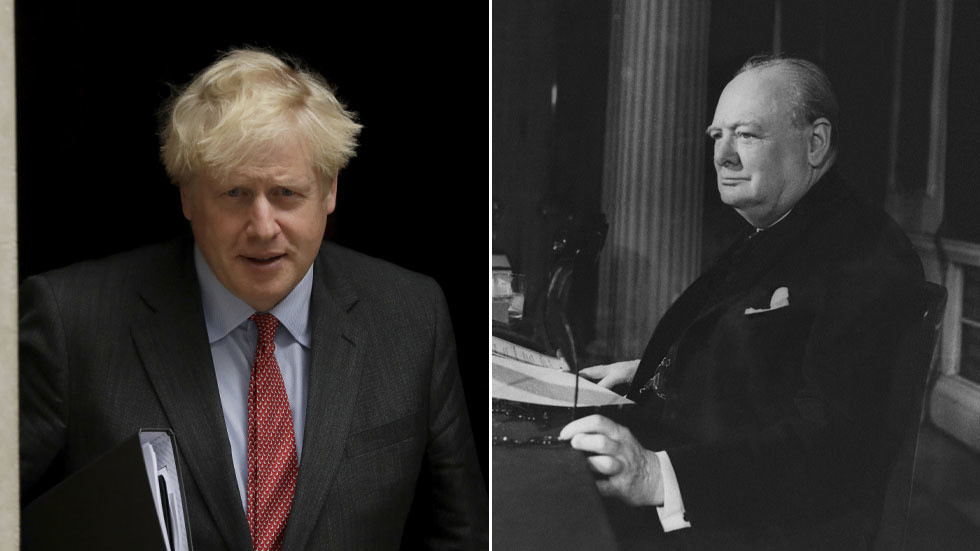 As Italians openly mock BoJo, he should forget about comparisons with Churchill and simply try to hold on to his job

The demise of Boris Johnson is hard to watch as his attempts to fend off criticism are met with derision. Barbs from Italy ridiculing his worship of Winston Churchill and mishandling of Covid are the latest blow.
Anyone with the sensibility to care for a pet can understand the conflict among Spaniards towards la corrida – the bullfight – which to the uninitiated seems like inhuman torture of a poor, dumb beast, but which to aficionados is a mesmerising, irresistible spectacle of life versus death.

Boris Johnson’s current travails bear parallels. A proud, hefty bull borne from great British stock, he entered the political ring as a PM full of life, scraping his glossy black hooves in the sand and snorting belligerent contempt for conformity, determined to bend the establishment toreadors to his will.

It hasn’t quite worked out that way, and he’s now showing signs of being on his last legs, mocked by the raucous crowd of public opinion, tormented by the media and political picadors, and finally humiliated at the hands of fellow matadors facing their own struggles in arenas elsewhere.

The Italians are the latest to draw blood after BoJo attempted to pass off public defiance of coronavirus restrictions in the UK as some sort of celebrated national British characteristic, rather than boneheaded ignorance and downright selfishness.

He suggested the rate of Covid-19 infection in the UK was higher than that of Italy and Germany because the Brits loved freedom more. That ruse did not quite work.

Instead, the Italians saw it for what it was and went on the attack. Usually mild-mannered President Sergio Mattarella declared his citizens “also love freedom, but we also care about seriousness.” The inference being that BoJo is not. Serious, that is.

Which would wound at this point, because in his latest appeal to the British public he has invoked the spirit of one of his predecessors, Winston Churchill: the idea that we must all stick together for the greater good. It is BoJo’s go-to position when he needs to rally the nation.

Lord knows, he must have spent hours and hours poring over the wartime leader’s personal documents and scribblings before penning his 432-page ‘The Churchill Factor’, described by the reviewer at The Daily Telegraph, the newspaper where BoJo formerly worked, as “a tour de force.” Unfortunately for Boris, not everyone buys the bluster.

Italian journalists joined the fray this week, picking and poking at the British leader, exploiting weaknesses in his defence. Journalist Massimo Gramellini, writing in Corriere della Sera, struck hard: “In short, if we put masks on here more than in London it’s because we had Mussolini and not Churchill.”

He countered the PM’s defence of UK refuseniks, saying: “Having rigid rules today represents real liberty, normality comes with following the rules and not following them, in my opinion, is contrary to future freedom.”

Suddenly, everyone’s emboldened enough to pile in on a bloodied and bowed Boris who seems incapable of mounting a robust defence. He is weakened by the debilitating effects of his own personal battle with Covid-19, alleged struggles with money and family, the interminable demands of a nation in a public health crisis and the seeming inability to navigate a way through this mess with the authority required.

Back in the bullring, he is on his knees, breathing heavily, bleeding into the sand and looking for an escape while trying to figure out the next move of his murderous tormentor, in the guise of Covid-19.

Churchill certainly had his struggles, private and public, but nothing quite like this. We wait to see if BoJo can survive as the crowd bays for blood.
#COVID-19  #Covid  #Coronavirus  #Boris Johnson
Add Comment