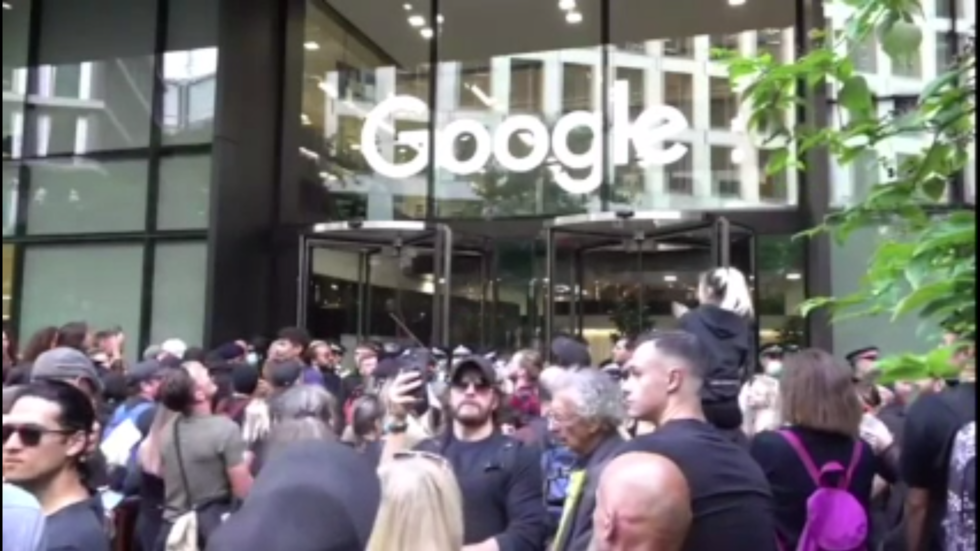 Anti-vaccine protesters in London have descended on the offices of tech giant Google, as their citywide campaign against the media continues. The protesters accuse Google and its ilk of silencing Covid-related dissent.

A crowd of protesters pressed up against the doors of Google’s office at London’s King’s Cross on Monday. The demonstrators chanted “we are the 99 percent,” while one shouted into a megaphone “they are not giving you the right information!” Piers Corbyn, a prominent anti-vaxxer and brother of former Labour Party leader Jeremy Corbyn, was seen among the crowd.

Google has, along with its subsidiary YouTube, taken a dim view of content that violates the establishment consensus on the pandemic response. Videos questioning the effectiveness of masks have been scrubbed from YouTube, while Google bans advertisements on web pages that question this consensus, and works with governments to squash what the White House calls “disinformation that causes vaccine hesitancy.”

The protesters were unable to enter Google’s offices, thanks to a line of masked police officers outside. However, the same demonstrators earlier managed to enter the offices of ITN Productions, a company responsible for news bulletins broadcast on ITV, Channel 4, and Channel 5. London’s Metropolitan Police stated that, once removed from the ITN building in Camden, they marched off in the direction of King’s Cross.

The protesters are apparently affiliated with Official Voice, a group describing itself as “a collective forum of like minded truth seekers.” To them, Big Tech and the media are working in concert to promote lockdowns and so-called “vaccine passports,” and to stifle dissenting views on the virus, vaccines, and associated restrictions to civil liberties.

Two weeks earlier, the same protesters stormed the BBC’s former studios in White City. However, they were mocked by others for apparently not knowing that the broadcaster had moved out of the studio complex nearly a decade ago.

London’s police officers had their hands full on Monday. Aside from the anti-vaccine protesters, crowds of Extinction Rebellion climate protesters blocked roads in the city centre on Monday, kicking off a promised two weeks of daily demonstrations.