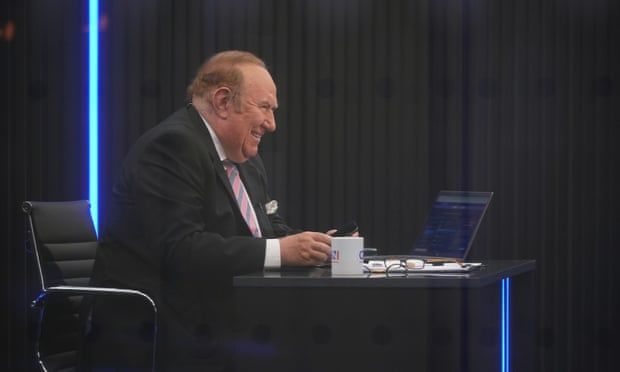 Ex-BBC host was unhappy with technical mistakes, loss of key staff and the channel’s political direction
Andrew Neil has resigned as lead presenter and chairman of GB News after differences of opinion over the direction of the rightwing channel, raising questions over its future.

The ex-BBC host was the face of GB News before it went on air in June but has left after presenting just eight programmes in three months. He was unhappy with technical mistakes, the loss of top staff and its political direction.

In the end Neil was outmanoeuvred by the former Ukip leader Nigel Farage, who is now the channel’s best-known figure, along with a number of more stridently rightwing hires keen to address culture war issues.

The terms of his departure were unknown, although multiple GB News sources claim the process was the subject of lengthy legal wrangling after the breakdown in his relationship with the station’s chief executive, Angelos Frangopoulos.

Despite being the channel’s chairman, Neil spent most of the summer at his home in the south of France, watching as his close ally and director of programming, John McAndrew, left amid pressure to shift more focus on to culture war issues.

One person with knowledge of the station’s inner workings claimed the relationship between Frangopoulos and Neil was beyond repair, saying: “From the launch onwards, every piece of advice [Neil] was giving wasn’t taken on board.”

They said the channel urgently needed to attract more viewers to meet its targets, but risked running foul of the media regulator’s rules on impartiality. “The thing they’re really sweating are the ratings,” they said. “Farage was the great shot for the ratings once Andrew went. He’s no longer the great ratings boom, so who is? Where do they go? It’s just hard to see where they go now except further in one direction, which could run into Ofcom issues.”

Frangopoulos has led a push in recent weeks to hire more radical rightwing presenters who will deliver state-of-the-nation monologues, following the same formula he used while running Sky News Australia. Producers at GB News say he is increasingly micromanaging almost every aspect of the station.

Addressing Neil’s departure in an internal email to staff, Frangopoulos said: “I know many of you will feel incredibly disappointed by this, as I do. Andrew joined GB News 12 months ago and signed a multi-year contract so we hoped he’d stay longer.”

Many of the young behind-the-scenes staff who keep the channel on the air are believed to have become increasingly demoralised by its direction. Some joined due to Neil’s repeated promises that GB News would be a mainstream news channel with a right-leaning slant rather than a British version of Fox News. But it is continuing to lose staff as it leans into culture war topics, and several senior producers have quit in recent days.

Neil’s decision last year to leave his longstanding job at the BBC and become the face of the channel played a significant role in convincing investors to sink £60m into the GB News project. Since then it has endured low ratings and an advertiser boycott.

Neil said: “I am sorry to go, but I have concluded that it is time to reduce my commitments on a number of fronts. Over the summer I’ve had time to reflect on my extensive portfolio of interests and decided it was time to cut back. I wish GB News well in continuing to fulfil its founding promise and mission to reach audiences currently underserved by existing news broadcasters.”

Neil said he would remain as a twice-weekly contributor to Farage’s nightly 7pm show and made his first appearance on Monday night’s programme, but did not discuss his departure from GB News. He will also return to the BBC as a panellist on Thursday night’s episode of Question Time.

While GB News has struggled in the ratings, with some programmes registering as having zero viewers, it has enjoyed some success on social media, with one recent monologue attacking the US president, Joe Biden, attracting 10m views on TikTok.

As a result, the channel’s future may lie in the hands of its investors, who include Legatum, US media company Discovery, and Brexit-funding investment manager Sir Paul Marshall. One core issue is whether they are happy to subsidise the station’s losses for a lengthy period of time; another is whether they can find the staff willing to keep it on air.
#Nigel Farage  #Joe Biden
Add Comment