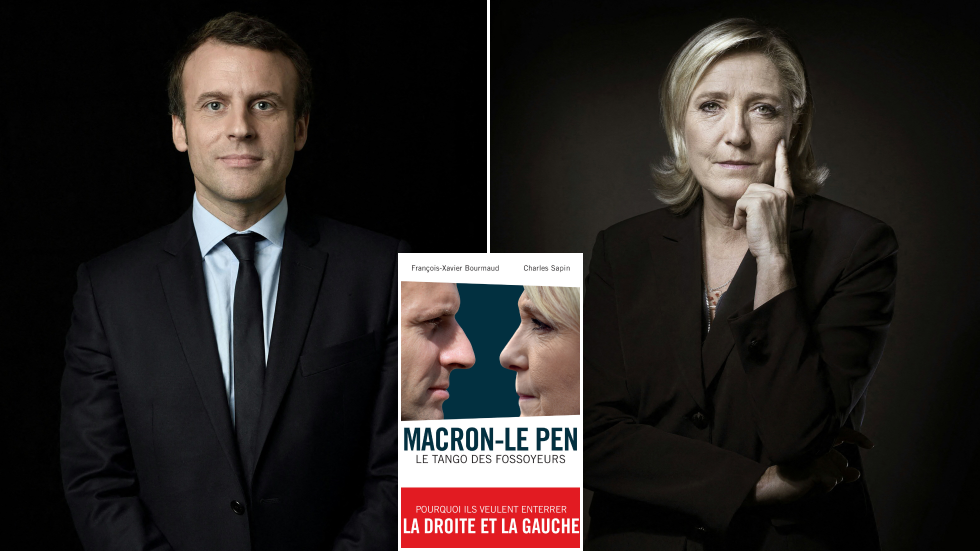 A new book spells out how the Left and Right are dead in France, and Macron vs Le Pen is all about globalism vs nationalism

‘The Gravediggers’ Tango’ explains the shifting sands in French politics in great detail – and also makes clear that when the dust settles on the 2022 presidential election, it will very much be the end of the road for the loser.

As the battle lines for next year’s French elections become ever more clear, President Emmanuel Macron and challenger Marine Le Pen find themselves in a grim war of attrition, both competing for the same voters, both putting everything on the line and both knowing that failure will be the end of their political career.

Of course, they’ve been here before, having contested two rounds of the 2017 election, which finished 66-34 in Macron’s favour. But four years ago, Macron was a former Socialist minister trying to convince the people he was a democratic revolutionary with a bold new third way, while Le Pen was the leader of a hardline, stubbornly right-wing party that wanted out of the European Union and took a tough stance on immigration, Islam and patriotism.

But this is no story of Right and Left ideology, because in France these two bastions of political thinking are no longer relevant. Neither of these traditional camps, so commonplace in most other Western democracies, has been able to present a single serious candidate capable of uniting the various splinter groups that now comprise their whole. Nor do they show any capacity to attract voters away from Macron’s La République En Marche or Le Pen’s Rassemblement National.

As the book’s title suggests, Macron and Le Pen have laid the traditional schools of thought to rest, but both have paid a heavy price, lost close allies along the way and, come the day after the second round of the presidential election next year, their ambitions could also be dead and buried.

A breath of fresh air when he declared his candidacy in 2016, Macron had shed the political affiliation he had formed with former President François Hollande, preferring his own route to power which meant a new party, formed from the top down with him as its leader.

The idea was simple. Neither Left nor Right had the solutions to the problems facing France and opinion polls backed that idea. In 2016, pollster Elabe found 45% of French people considered the ideal head of state would be neither Left, in the centre nor on the Right. It was obvious what the people wanted: anything different. So that’s what Macron gave them.

To soften his socialist background, he chose Edouard Philippe, a former member of the traditionally Right Les Republicains, to be his prime minister, neatly mixing red and blue into a palatable purple. Then, by maintaining the narrative of Le Pen as an extremist, he kept the pathway to the Elysee clear of competition so he could stride confidently towards the palace gates, before starting work on his ambitious platform of simultaneous right-wing and left-wing reforms.

Le Pen may have lost the battle but she certainly learned her lesson. After 2017 it was back to the drawing board. And that meant a quantum shift in her offering to the French public.

Out went the party’s name; the Front National was no longer. Founded by her father, Jean-Marie Le Pen, his legacy of racist policies gave off a stench she just could not get rid of, but the newly branded Rassemblement National would be a fresh, cool breeze. A poll at the time found 72% of traditionally Right Les Republicains supporters approved of the name change.

There would be no more racist talk on immigration or Islam and no more EU-bashing or plans to ditch the euro. And if shifting away from these policies meant some members and supporters were unhappy, then they too could go. And they did. Anything that deterred traditionally centrist-Right voters would be ditched as Le Pen made eyes at prospective supporters.

She manoeuvred into the space left by Macron on the Right by those French voters who just didn’t trust him, but Le Pen needed to reframe the difference between herself and the incumbent president, so she conjured up the image of the selfish, global nomad as opposed to the proud citizen of France.

“Nomadism is the opposite of our values of civilisation,” she said in one speech at the time. “(It is) the reign of empty individuals, wandering on a cultural wasteland with a lack of identity. We believe in a sustainable France, proud of itself, sure of its values. We prefer the ‘We’ to the ‘I’ and believe that ‘being’ is better than ‘having’. We are the party of loyalty. Faithful to our people, to our culture, to our values of civilisation.”

This is no longer Left versus Right or Red against Blue. This is globalist against nationalist. The new battle lines have been drawn.

Powerful stuff. Le Pen’s ability to call on a grassroots support that supported her in the Front National and followed her journey to the Rassemblement National, while portraying herself as the leader of a clearly identifiable powerbase, is something Macron has never been able to do. His support is as firm as the shifting sands. Sure, sometimes it can build into mighty dunes, but it can also blow away in the wind, leaving no trace behind.

Current polling shows Macron on 24%, a single point ahead of Le Pen, but a second-round forecast still declares him triumphant at 55-45. Yet as the authors of ‘The Gravediggers’ Tango’ point out, Macron’s claim to be the ideological outsider and the democratic revolutionary is no longer applicable. He is now a central pillar of the very same establishment he once derided.

Le Pen has assumed that role as something different, while Macron has been forced to take on all the problems of a moribund French economy, a worldwide public health crisis and a divisive battle over Islamic separatism.

His opponent is a driven, ambitious woman for whom this is the last throw of the dice. Failure next year would spell the end of Le Pen’s presidential dreams. For Macron, being beaten would no doubt see him exit the political stage for good. Jupiter does not do an encore.

These two ‘gravediggers’ have a lot at stake. They might have been complicit in burying the traditional Left and Right, but the impending election puts a lot more at stake. Victory will see one toss a clump of soil on to the coffin of their arch-foe as their political career is laid to rest. Forever.