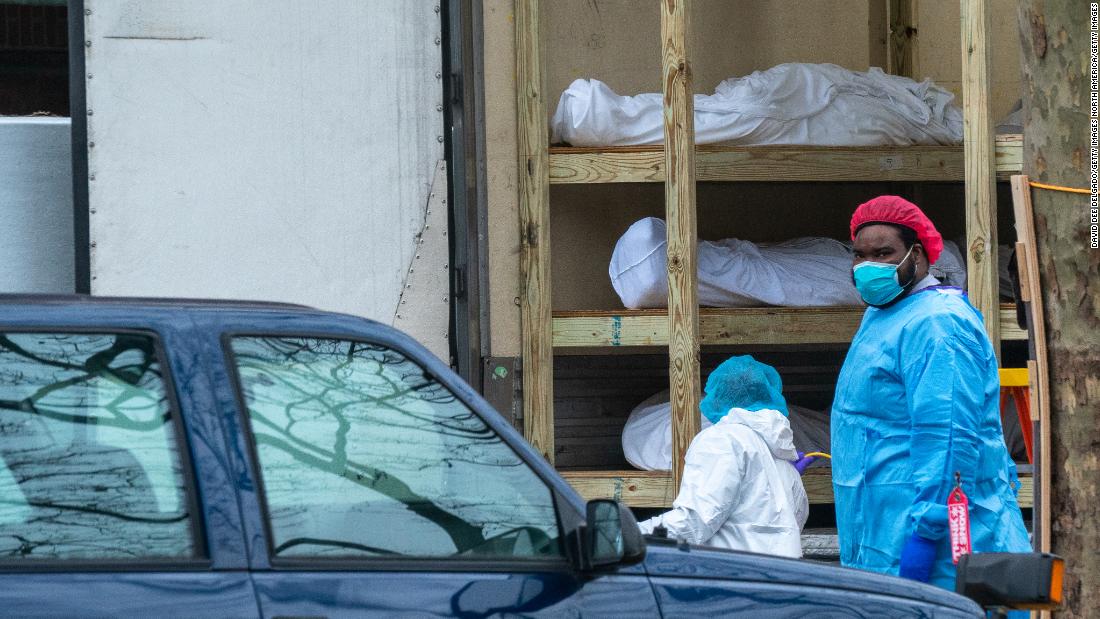 Why New York has been hit so hard by coronavirus

New York state reached a tragic milestone this week: It now has more Covid-19 patients than any country in the world, aside from the United States.
The state's total of 181,026 cases, as of April 11, is higher than Spain's (161,852 cases) and Italy's (152,271), countries with populations many times larger than New York.

The disease is killing New Yorkers disproportionately. Of the 20,389 deaths in the United States, 8,627, or 42%, have occurred in New York. Its mortality rate is 4.7%, compared with 3.4% in the rest of the country, according to CNN's figures based on data from the Johns Hopkins University Center for Systems Science and Engineering.

New York City and its suburban counties - Nassau, Suffolk, Westchester and Rockland - are responsible for 93% of the statewide case count. Furthermore, in New York City, the Covid-19 death rate is about 6% higher than most countries.

Why does New York seem to be having a different epidemic from most other parts of the country?

Is the reason simply population size and density? New York is by far the nation's most populous city, with more than 8 million people, twice as many as Los Angeles. But New York also has eight or nine times more cases than any other city -so what gives? No other city or county has a fraction of the cases of New York City.

A caution on numbers: Counting cases and mortality rates is difficult because most counting is done by county or borough or parish rather than city, and city of residence may differ from city of diagnosis or death. Even so, New York City is off the charts.

How about population density? Covid-19 spreads most easily when people are packed together - in churches or cruise ships, in outdoor events like concerts or Mardi Gras, or perhaps in small apartments with multiple roommates or large families. New York's population density, about 27,000 people per square mile, is easily the highest in the country, though it's nowhere near the top for cities across the globe. Many cities - in Asia, for example - have a density of nearly 40,000 people per square mile.

The density explanation may explain some of the difference, but not all of it. New York's densest borough is Manhattan, while relatively sprawling Queens sits at fourth out of five. But Queens has more than twice the cases and twice the rate of cases as Manhattan.

Maybe it's because so much testing is being done in New York. If you test more, you find more, and if you find more, you test even more. It is likely that more tests, and more tests per population, are performed in New York than elsewhere in the United States, and that the New York rate stacks up favorably to countries with aggressive testing programs, such as Iceland and South Korea and Germany, but comparative information is sketchy. The split between tests performed by public versus private labs has made accurate tracking just about impossible, despite the heroic efforts of such groups as Covidtracking.com, Worldometers, and Our World in Data.

Furthermore, the current advice - stay home if you are sick but stable and don't be tested - introduces additional uncertainty. This pales in comparison to the clear evidence of deaths at home likely due to Covid-19 but never diagnosed. So yes, New York City probably is testing at a brisker pace than elsewhere and yes, this may contribute to the high case numbers, but we will never have an accurate picture.

The high number of cases and rates likely do derive in some modest amount to each explanation above - plus the fact that the epidemic has been in New York City a week or two longer than many other places. A more mature epidemic is always a larger epidemic.

More concerning is the elevated mortality rate in New York City. As has been well documented, some of this is due to the tragic overwhelming of the city's hospitals. We will never know just how many people died due to the country's inept preparation for the pandemic, but the impact surely was, and still is, substantial.

Still, a mortality rate of about 6% is quite high, even though most countries, particularly in western Europe, have seen mortality rates rise as the pandemic drags on. As patients who have hung on for weeks have begun to die, and the rate of new cases has slowed, this tilts the proportion of fatal cases.

New York City also has had a very male outbreak; substantially more men have been diagnosed, hospitalized and have died, in keeping with data seen in other countries.

Sadly, the likeliest explanation for the high death rate, though, is the chronically inadequate health care given to minorities and the poor throughout New York City, as in the rest of the country. New York City and New York state have only now released the race distribution of cases and deaths, as well as by zip code, a surrogate for poverty rates. It is clear that severe disease has not been distributed equally by race and ethnicity.

Black and Hispanic New Yorkers represent 51% of the city's population, yet account for 62% of Covid-19 deaths. They have twice the rate of death compared with whites, when adjusted for age. This likely is due to both a higher proportion of black and Hispanic New Yorkers being diagnosed with severe disease and a higher rate of death among those who are known to be infected.

This disparity likely is the result of several factors. Co-morbid conditions, such as hypertension and diabetes, are strongly associated with death from Covid-19 and are more common in black and Hispanic communities. But what causes high rates of poorly controlled hypertension and diabetes? Lack of appropriate health care. People who cannot easily find good health care for reasons of money, time, location, or trust may be more likely to stay at home undiagnosed and spread the virus - as well as experience potentially fatal delays in diagnosis and treatment.

The explanation is the same for New York City as for Italy, New Orleans and probably Iran: the virus exploits weaknesses in health and health care, be it advanced age or co-morbidity or access to care.

Hopefully, the Covid-19 pandemic will force us to reckon honestly with the many shortfalls that have been exposed and build a fair, forward-thinking approach that allows doctors and nurses to care for people in need. Failure to do this will only further darken the memory of those who have died and the hearts of those who remain.
#COVID-19  #Covid  #Coronavirus
Add Comment