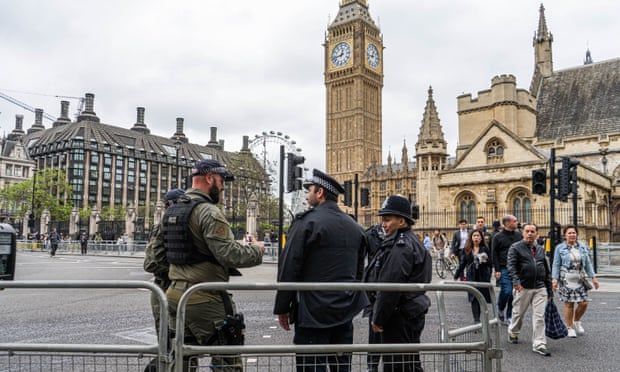 Met policy is not to identify detainees pre-charge, but reasons media are not naming politician are more complex
The fact that a Conservative MP has been arrested on suspicion of rape and other offences and ordered to stay way from Westminster, but has not been identified, is the result of several legal and procedural factors.

The Metropolitan police have not named him because, in line with College of Policing guidance, they do not usually identify people who have been arrested before they are charged.

The reason why newspapers are also not naming him is more complex and is connected to a mixture of convention and legal precedent going back to the 2012 Leveson report on media standards, which recommended suspects remain anonymous pre-charge.

While many newspapers disagreed with this as a policy, a complication came with the legal case the singer Cliff Richard won against the BBC after the corporation reported he was being investigated over allegations of historical child sexual assault, for which he was never arrested or charged.

The ruling was seen as limiting the freedom of media organisations to report such investigations, despite the fact that particularly with historical cases, this can prompt more potential victims to come forward.

In another legal decision, in February this year the supreme court ruled against the news agency Bloomberg for naming a US business executive at a large public company who was facing a criminal inquiry by a British regulator. The businessman said Bloomberg had misused private information as he had not been charged with any offence.

Another potential complication is that among the allegations faced by the MP is abuse of position of trust, an offence connected to children aged under 18. If naming the MP could risk revealing the identity of an alleged victim this would also be a major barrier.

In the past, MPs who were arrested were automatically named by parliamentary authorities. This changed in 2016 after the cross-party procedure committee said this could bring privacy issues. Now, MPs are consulted, and named only if there is a reason of “parliamentary privilege or constitutional significance”.

At the time, the committee argued this did not provide any special privilege for MPs, but simply brought their treatment into line with that of anyone else.
Add Comment