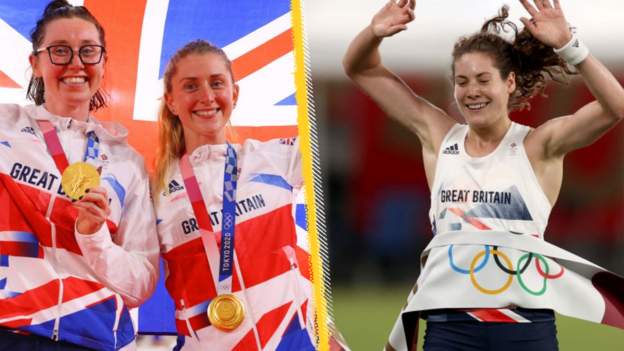 Cyclists Kenny and Katie Archibald took the women's madison before French followed up in the modern pentathlon for Britain's 18th gold at Tokyo 2020.

Laura Muir won 1500m silver, with another coming for the men's 4x100m relay team and a bronze for the women.

Team GB now have 58 medals in total and with two days of competition left are battling to finish above Australia and the Russian Olympic Committee, who have 17 golds each.

Sprinter Dina Asher-Smith, whose 100m and 200m campaigns were ended by injury, returned to help the British team win bronze in the women's 4x100m relay final.

Britain's men's relay team featured Zharnel Hughes, who false started in the 100m final, and were agonisingly pipped to gold on the line with Italy ahead by just one hundredth of a second.

That came a few hours after the hockey team beat India in a 4-3 thriller to win bronze.

In the velodrome, Jack Carlin also claimed a bronze by beating Denis Dmitriev, who represents the Russian Olympic Committee, in the best-of-three men's sprint races.

Earlier the 24-year-old Scot was beaten by Dutch world champion Harrie Lavreysen - who ended Jason Kenny's nine-year reign as Olympic champion on Thursday and went on to take gold - in the semi-finals. 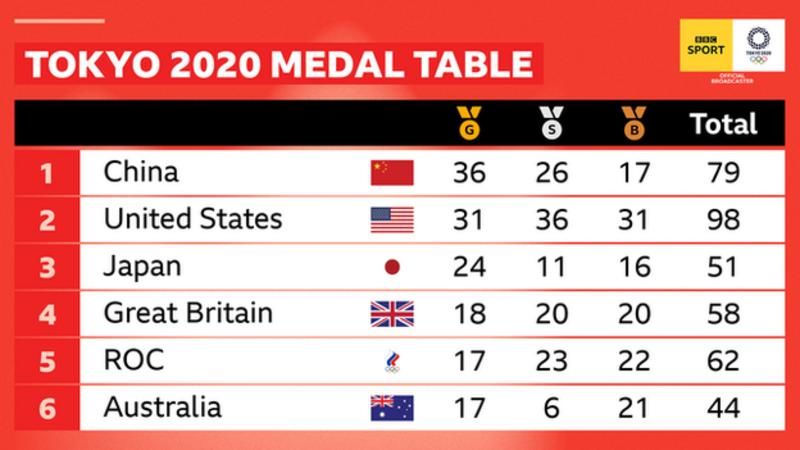 Team GB had 60 medals at this stage in Rio and 58 in London.

The 18 golds won so far fall well short of London's 25 and Rio's 24 at this stage. Two to four more gold medals for Great Britain seem realistic this time for a final total of 20 to 22.

Laura Kenny's fifth gold, which follows six Olympic titles for husband Jason, means the Kenny household boasts a total of 11 - the same as Team GB claimed in total at three Games from 1988 to 1996.

The Tokyo triumph was her first Olympic victory as a mother, having welcomed son Albie in August 2017.

"When I fell pregnant, there was a moment two months into the pregnancy where I woke up and said to Jason 'I can't do this, I'm not going to be able to carry on [with cycling], there's just no way.' And here we are," she said.

"All week I've been saying please don't ask me about Albie - I've never missed him so much." 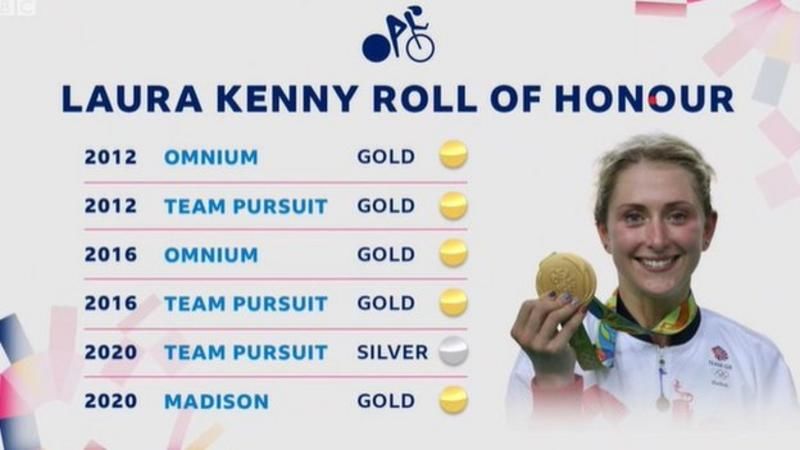 Kenny and Archibald credited coach Monica Greenwood - who took over coaching the endurance squad in December - for their win, revealing they had been training against GB's men's under-23 squad to perfect their madison plan.

"I couldn't do it without these girls. With Katie I feel like I'm racing with a sister - I'm so grateful to have her here and her support. I couldn't have done it without her," added Kenny, who won team pursuit silver earlier in the week.

It further extends her status as Britain's most successful female Olympian. She now has six Olympics medals - the same number as equestrian's Charlotte Dujardin, who has won three golds.

French fires GB to another gold

French took Britain's gold-medal tally to 18 in Tokyo with a storming final event in the modern pentathlon - the laser run, a 3,200-metre run punctuated by four shooting stages.

Starting in fifth position overall, the 30-year-old moved into the gold-medal position with a dominant performance which saw her finish more than 15 seconds ahead of Lithuania's London 2012 champion Laura Asadauskaite.

After finishing fifth at Rio 2016, French became Britain's first champion in the event since Stephanie Cook topped the podium at Sydney 2000.

"I tried not to think too much about getting a medal. I'm so pleased I was able to hold it together. It's always been a dream and I can't believe it's come true."

The event, which covers fencing, swimming, riding, shooting and running ended in heartbreak for Annika Schleu in a typically unpredictable equestrian round.

Horses are randomly allocated to riders and the German's mount Saint Boy proved more of a sinner as his wayward antics ended her medal hopes.

Relief for Muir as she finally earns Olympic medal

Muir fought back tears as she celebrated winning an Olympic medal after a series of near-misses in major outdoor championships.

The 28-year-old Scot slipped out of medal contention on the last lap to finish seventh at Rio 2016, while also agonisingly coming close to the podium in three World Championships.

In Friday's final in Tokyo she was thought to have a chance of winning bronze at best, with Kipyegon and Sifan Hassan of the Netherlands - who Muir will share the podium with - considered the favourites.

A determined Muir kept pace with the pair in a fast race and overtook Hassan in the final 200 metres before setting a new national record.

"I don't know what to say - I've worked so hard for so long," she told BBC Sport in an emotional post-race interview.

"I've been fourth, fifth twice, sixth and seventh every year since 2015 and with everything last year being postponed and not knowing what was going on - I got a silver!"

Price, 27, is a talented and versatile athlete having played football for Wales and been a kickboxing world champion - with the Duke of Cambridge among her fans.

Also a former taxi driver, Price switched her full focus to boxing after winning middleweight bronze at the 2014 Commonwealth Games.

Now she is the reigning world, Commonwealth and European champion, with the shot at the Olympic title to come on Sunday.

Price won her semi-final bout with Dutch opponent Fontijn on a split decision to go into the gold-medal round.

"It's mad, to be honest," said Price, who won 52 caps for the senior Wales football team.

"It's everyone's dream to get to the final and I'm going to do the utmost to bring back that gold."

Five years ago in Rio, Great Britain's women's hockey team won their first Olympic gold in a moment which has gone down in the nation's sporting folklore.

But expectations were much lower going into Tokyo following a turbulent Olympic cycle.

Several star names have retired, including captain Kate Richardson-Walsh and forward Alex Danson, while there have been injuries to other key players and the upheaval of head coach Danny Kerry leaving to take over the men's side.

In 2019, they were thrashed 8-0 by the Netherlands and needed to beat Chile in a two-legged qualifier to even reach Tokyo.

"This cycle has not been too much of a rollercoaster because there's not been many highs," captain Hollie Pearne-Webb told BBC Sport.

"Olympic bronze even a few months ago was not in our wildest dreams."

What else happened on Friday?


* American Allyson Felix became the most decorated female track and field athlete of all time by taking 400m bronze for her 10th Olympic medal. Shaunae Miller-Uibo of the Bahamas won the gold medal, with GB's Jodie Williams sixth.


* Diver Tom Daley will seek a second gold medal of the Games in the 10m platform on Saturday (07:00 BST) after progressing from the preliminary round.