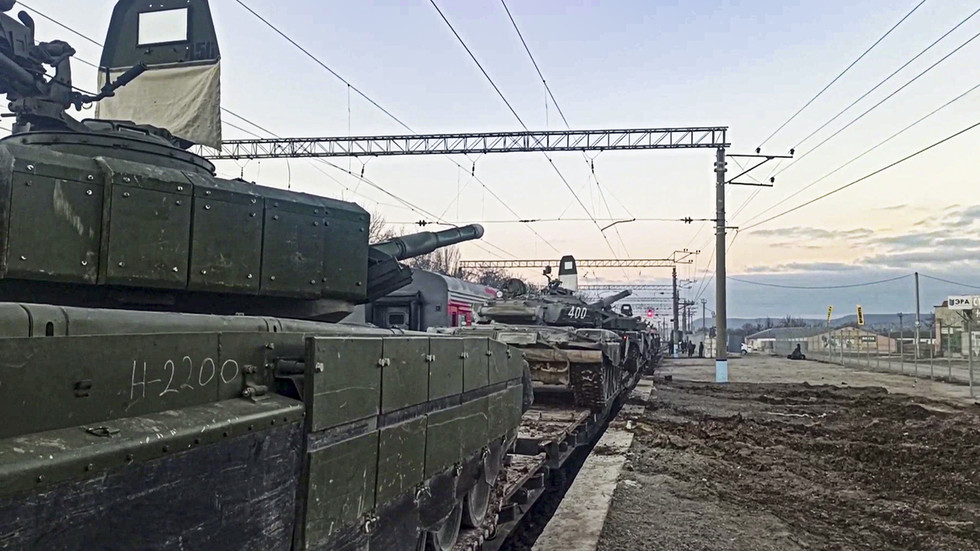 West has doubts over Russian troop withdrawal from Ukraine border

Western politicians, pundits and media have responded with skepticism to Moscow’s Tuesday announcement it’s pulling away troops from the Ukrainian border, insisting that they need to “verify” the forces are heading away from Ukraine.

Earlier in the day, Russia said its military units began returning to their bases as the large-scale joint exercises were wrapping up in Belarus close to its border with Ukraine.

Britain’s Prime Minister Boris Johnson produced one of the harshest statements, accusing Moscow of sending “mixed messages” with its behavior. Citing unspecified “intelligence” allegedly available to London, he insisted that Russia’s military activities still looked as if it was preparing to invade its neighbor.

“We’ve got Russian field hospitals being constructed near the border with Ukraine in Belarus [that] only can be construed as preparation for an invasion,” Johnson said. “You’ve got more battalion tactical groups actually been brought closer to the border with Ukraine, according to the intelligence that we’re seeing.”

“Cautious optimism” has been expressed by NATO’s boss Jens Stoltenberg, who said there were “signs coming from Moscow about the willingness to continue to engage in diplomatic efforts.” However, the bloc still wants to see “a significant and enduring withdrawal of forces, troops and the heavy equipment” by Russia away from the Ukrainian border, he added.

The US took a similar stance, with Washington’s envoy to NATO, Julianne Smith, saying that they need to “verify” the pullback first before making any assessments.

“We have noticed today that Russia is claiming that they are moving towards some sort of de-escalation. We are monitoring the situation,” Smith said. “We will have to verify whether or not that is in fact the case.”

Some media outlets as well as a number of independent analysts have gone even further in expressing doubts over the pullout, alleging that more Russian troops have been heading towards the Ukrainian border than moving away from it. No solid evidence for this has been produced, except for anonymous sources.

The Times’ defense editor Larisa Brown cited an unnamed official claiming that Russian forces were “going in and... going out” of the area close to Ukraine’s border.

“We have seen reinforcement of combat and other capabilities close to the border. On balance what we have seen is further reinforcement,” the official said, as quoted by Brown.

Independent analysts have meanwhile rushed to nitpick footage of the troops withdrawal released by the Russian defense ministry. Some suggested the units that got pulled back were not close enough to Ukraine’s borders to begin with, for the movements to count.

Others claimed the situation should become clearer in the days to come, despite the British and American media putting the alleged ‘invasion date’ at February 16.

Tensions between Russia and the West, centered around Ukraine, have continued for months, with western politicians and media repeatedly accusing Moscow of seeking to attack Ukraine, a charge Russia has consistently denied. No actual evidence to back up the claims has ever emerged, with only observations of Russian troops’ movements touted as proof of the allegedly looming ‘invasion.’