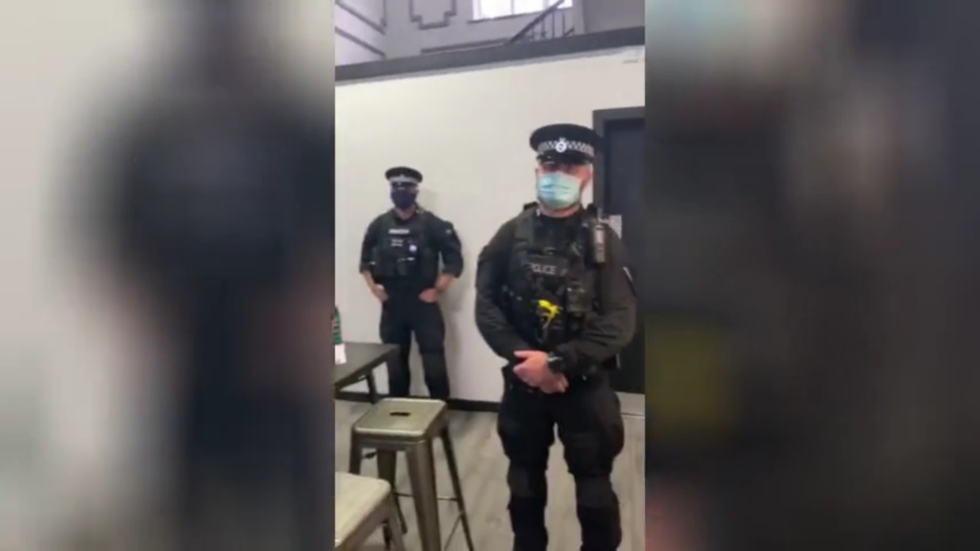 A gym owner in Liverpool, in the north of England, has shared a video of an armed police raid at his premises, during which he was issued with a £1,000 fine for breaching the coronavirus lockdown measures in place in the city.

Body Tech Fitness owner Nick Whitcombe was subject to a dawn raid of his facility Wednesday morning, following an anonymous tip-off from a member of the public that gym users were breaking the coronavirus lockdown. Police issued him with a warning to close, and an armed response unit then showed up to serve him with the fine.


Whitcombe is refusing to shut the doors of his gym, arguing that, according to his industry’s trade body, UK Active, the roughly 22 million gym visits across England between 25 July and 13 September have resulted in just 78 Covid-19 cases, or 0.35 cases per 100,000 visits.

He claims he told the police he wouldn’t be asking anyone to leave until they had finished their training, at which point he was issued with a £1,000 fine. He was told that officers would return in three hours and, if people were still working out, he would receive an additional £2,000 fine.


“It’s disappointing. They sent out seven or eight firearms officers! What a waste of resources,” Whitcombe said, having previously argued publicly that, “If we close our facility, we won’t have one to come back to… There will be no business, there will be no gym, there will be no jobs.”

“We need to keep fighting and we need you guys to keep supporting us,” he says in the widely shared video. “Keep sharing the data. Keep fighting the good fight. Gyms need to stay open.”

Merseyside Police Chief Superintendent Claire Richards said she understood the frustrations of local businesses, but stated that “the focus of us all should now be on preventing the spread of the virus and getting us back to normality as safely and as quickly as possible.”

Me on Saturday to No 10 officials “Gyms are safer than supermarkets, more COVID-19 transmissions come from our schools and retail than Gyms” response “we are not closing schools or restricting retail, so we can only go for Hospitality & leisure.“
Government decision not ours! https://t.co/MdHbbeCx74

Liverpool Mayor Joe Anderson also weighed in on the situation, amid reports that several of the city’s gyms were resisting the lockdown. The directly elected dignitary said Whitehall officials had told him the hospitality and leisure sectors were being targeted because the government couldn’t impose the same restrictions on schools and retail outlets.

Liverpool and five surrounding boroughs in the metropolitan area have been placed under a Tier 3 lockdown, England’s strictest level. Pubs and bars that don’t serve food have already been shut for four weeks, affecting up to 1,500 businesses. Leisure centers, gyms, betting shops, and casinos have all now also been forced to close.