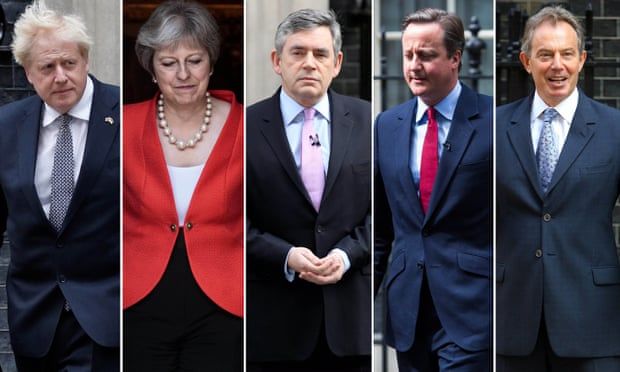 Was Boris Johnson the worst prime minister of recent times?

Analysis: after Johnson’s resignation, how does he compare with his four predecessors as PM?

Was Boris Johnson the worst prime minister of recent times? He squandered one of the strongest political positions held by an occupant of No 10 in record time. The authority gained after winning an 80-seat majority in December 2019 dissipated at extraordinary speed as he dealt with a series of scandals with a ham-fisted mixture of denial, disorganisation and even outright lying.

The high point was the election victory, secured on the back of the “get Brexit done” pledge. After securing an exit from the European Union, Johnson struggled with the coronavirus pandemic, was late imposing the first lockdown in March 2020 and was forced to cancel at the last minute a plan to loosen restrictions the following Christmas.

But Johnson was ultimately undone not by policy disagreements but by character failings. He presided over a lax culture at Downing Street during the pandemic, in which he, advisers and officials attended a string of booze-fuelled parties while people up and down the country were locked down at home.

The initial response was to say the rules were followed at all times. In the end 83 people were fined for breaking the rules across eight different events, including the prime minister himself. “The British people rightly expect integrity from their government,” said Sajid Javid, the first of dozens of ministers to quit in the final hours before Johnson’s resignation.

Like Johnson, May had a vertiginous fall. She became prime minister in the aftermath of the Brexit referendum and briefly enjoyed double-digit leads in opinion polls, but she was found wanting during the 2017 general election campaign, in which she struggled to connect with the electorate and forfeited the Conservatives’ overall majority.

The Brexit vote did not leave a clear plan to implement the UK’s withdrawal from the EU, leaving May battling to chart a blueprint. Yet she had no parliamentary majority and lacked support from her own party, a large portion of which pressed for an ever harder Brexit to the point where May ran out of options.

Such was the dominance of Brexit that May failed to achieve much of significance in other areas of domestic policy. And such was the resistance of her party that she could not complete Brexit either, forced to quit without getting any kind of exit deal agreed with the EU.

A longer tenure at the top does not necessarily mean a better prime ministership. Cameron won two elections, but his strategy – born out of overconfidence – to fight referendums ultimately finished his premiership and left a legacy of conflict that continues to this day. Although Cameron called and won the Scottish referendum in 2014, it failed to settle the independence question as he had hoped.

But it was the unexpected defeat in the Brexit referendum that forced Cameron to resign as prime minister, requiring the UK to leave the EU, although doing so took several years and two prime ministers to achieve. Leaving the EU ended more than 40 years of British membership of the single market and, while many wanted to see the end of free movement, reignited long-term questions about the future of Northern Ireland.

A few months after becoming prime minister in June 2007, Brown took the decision – or rather non-decision – from which his premiership never recovered. Ahead in the polls, aides had begun to brief that he would call an early election, but in October of that year he wobbled and changed his mind. By then the speculation had got out of hand, and a reputation for decisiveness was lost.

A row followed over the abolition of the 10p tax rate, eventually forcing a rethink for those who had lost out. The financial crisis, which should have played into the former chancellor’s hands, instead eroded the credibility of the party in government, which was successfully labelled by the Conservatives as profligate.

Questions also lingered over Brown’s character – accusations surfaced that in private an angry prime minister would throw mobile phones, staplers and even, on one occasion, a printer. Yet, for all the problems, the Conservatives failed to win an overall majority at the ensuing 2010 election, forcing Cameron into coalition with the Lib Dems. But Labour has been out of power for more than a decade since.

Blair won a landslide in 1997 and scored a similar victory in 2001, a period of electoral dominance achieved previously only by Margaret Thatcher in recent memory. There were many achievements during his long premiership, including the introduction of the minimum wage and heavy investment in schools and hospitals during a period of economic growth.

But the legacy of success in the early years was tarnished by the invasion of Iraq in 2003, where Blair insisted on acting side by side with George W Bush in attacking a country that was not obviously allied with Islamist terrorism and did not possess the weapons of mass destruction that were the justification for the invasion.

Iraq was not turned into a stable western democracy as hoped, and two long periods of insurgency followed, which partly helped fuel the terrorism in the years thereafter. It was not until the final territorial defeat of Islamic State in 2019 that the jihadist threat failed, while the strategy of western liberal intervention was fundamentally undermined.