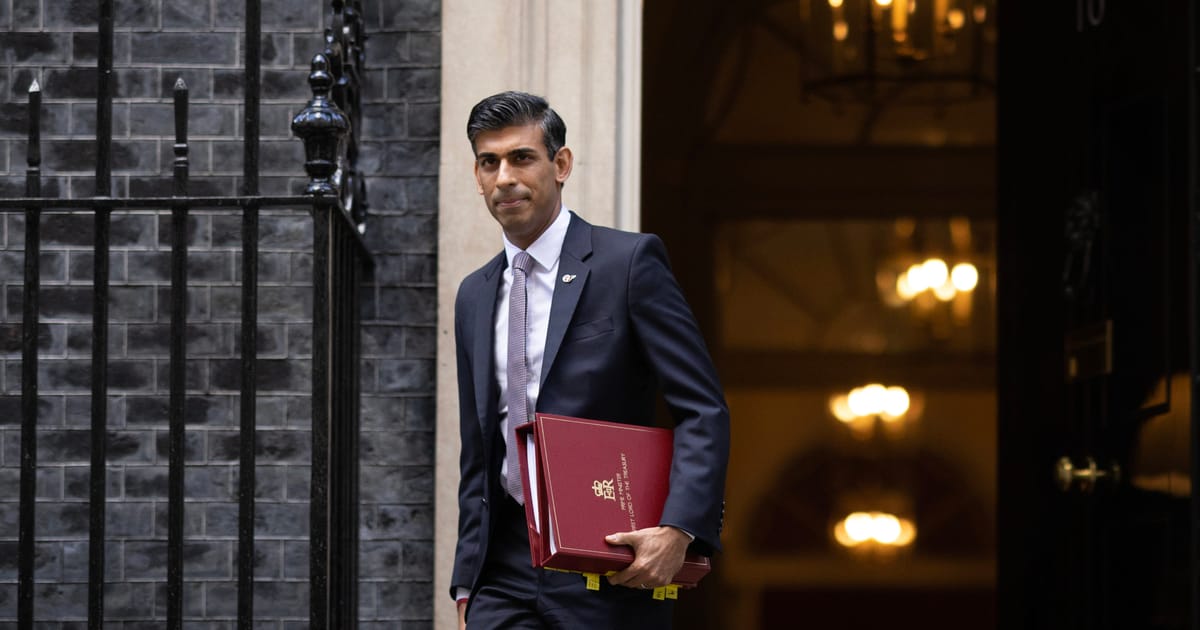 The new prime minister wants to reset the UK’s relationships internationally, but he doesn’t have much room for maneuver.
Rishi Sunak knows he wants friends on the world stage. But to make some, he’ll need to explain what kind of friendship he’s offering.

Britain’s new prime minister will arrive in Bali, Indonesia for the G20 summit on Monday afternoon, where observers expect him to lay down the first markers of the U.K.’s foreign policy under his leadership.

After the combative, unpredictable reputations of his predecessors, Sunak’s first task is to smooth feathers ruffled by Boris Johnson and Liz Truss and to restore Britain’s reputation for reliability.

One of his first acts since taking office has been to call French President Emmanuel Macron a friend — a deliberate contrast to Truss’ one-time refusal to do so, which caused genuine alarm in British diplomatic ranks. Sunak sought a bilateral with his French counterpart at the COP27 climate summit in Egypt this week, a meeting characterized as “very warm” by one No. 10 official. That also distinguishes the new prime minister from Johnson, who had a rocky relationship with Macron.

But aside from Sunak’s warm words for one of Britain’s oldest allies, the prime minister’s advisers are keenly aware that beyond the overtures, he lacks a vision for the U.K.’s role internationally.

Unlike Johnson and Truss, who were both foreign secretaries before entering No. 10 Downing Street, Sunak rose to power after a seven-year parliamentary career defined by his two years as chancellor overseeing the economic response to coronavirus. It’s natural then that as they begin to craft his policy priorities, Sunak’s advisers say they are looking to play to his strengths in economics.

After Russia’s invasion of Ukraine caused a spike in global energy prices and inflation, British officials expect issues of international economic security to come to the fore in the way they did after the 2008 financial crash.

The prime minister at that time, Gordon Brown, was a former chancellor too. He brokered a “coming together of the world” to agree a package of aid for the global economy at a G20 summit in London in 2009.

At a meeting of his Cabinet earlier this week, Sunak referred back to that G20 summit during the financial crisis. He told ministers that Bali was a chance to confront shared economic challenges and “demonstrate to those back at home how it would help them,” his spokesman said.

Before he can offer global leadership, however, Sunak needs to restore economic stability at home. A No. 10 official said: “The only good foreign policy that is made is off the back of a strong economic footing.”

“He comes to the G20 from a rather weak position,” said former top U.K. diplomat Peter Ricketts. “Having taken its financial system to the brink of collapse under Truss, the U.K. has one of the lowest growth rates and highest inflation rates, certainly among the G7 if not the G20.

“Everybody will be conscious that he’s facing massive domestic economic issues at home, which don’t put him in a great position to offer leadership, frankly, in that area.”

Sunak also doesn’t have much cash to splash. David Lawrence, a research fellow at the Chatham House think tank, said the state of Britain’s finances severely restricted the options for the incoming prime minister.

“Whether it’s the Indo-Pacific tilt [to strengthen economic ties in the region], making Britain into a science and technology superpower, or funding defense, aid and diplomacy — whatever it is you want to do in terms of global ambitions, you need to be able to pay for it,” Lawrence said. “And it’s a lot harder if you’ve got a weak economy.”

One consequence of this has been the U.K. cutting back on international aid spending, which has not gone unnoticed abroad. “Our reputation as a serious development policy country, which was very strong under the days of DFID, is very much diminished,” Ricketts said, referring to the former Department for International Development (DFID), which Johnson merged into the Foreign Office. “That rather weakens his hand as well and will be noticed by the G20.”

Two big questions
Sunak might be the new kid on the block, but his presence will be a sideshow, barely registering during a summit of huge geopolitical importance.

All eyes will be on a highly-anticipated meeting between U.S. President Joe Biden and Chinese President Xi Jinping, expected on Monday.

This is also the first G20 summit to take place since the invasion of Ukraine, and President Volodymyr Zelenskyy is expected to attend as Russian President Vladimir Putin gives it a miss.

Both China and Ukraine represent challenges for Sunak, not least in terms of the domestic reception to his approach. His instincts on China are softer than most of his party and as chancellor, he sought significantly closer economic ties with Beijing.

Tory China hawks are nervous that Sunak’s premiership will bring a significant tempering of the U.K.’s stance toward Beijing, and point to the fact that former Chancellor George Osborne — who oversaw the so-called “Golden Era” of U.K.-China relations — is back advising the Treasury.

“On China, I think we can expect continuity Boris, not continuity Truss,” one government official said, in reference to Sunak’s immediate predecessor’s tough rhetoric. “Some of it is gonna be dialed back.”

Sunak significantly hardened his stance during this summer’s Conservative leadership race, describing China as “the biggest long-term threat to Britain and the world’s economic and national security.” Pressure groups including the China Research Group of Tory MPs, which suggested changes to Sunak’s approach during a policy meeting this summer, will be watching his trip to Bali for clues he is likely to follow through on his campaign promises.

On Ukraine, the U.K. has been at the forefront of the Western response and the question is whether Sunak can maintain that.

“The rhetoric will remain tough, but he’s not matched the commitment on defense spending,” said Daniel Sleat, a director of research at the Tony Blair Institute. “There is a possibility that the U.S. ends up in a slightly more constrained or nuanced position after the midterms, and the question then for Sunak is how much he wants to lead or follow on Ukraine if the U.S. is taking a step back.”

Tilt to the east
The summit’s host, Indonesia, is among several mid-sized emerging powers on the G20 that are playing a balancing act between the West and Russia and China.

Under Sunak’s two immediate predecessors, the U.K. pursued what it called an Indo-Pacific tilt, seeking closer ties with such economies.

As a committed Brexiteer, the prime minister might be compelled to follow the same framework. Greg Hands, his trade minister, has made signing the 11-nation Indo-Pacific trade pact CPTPP one of his top priorities.

Meanwhile, Sunak’s team is lining up bilateral meetings at the G20 with Asian leaders including Indian Prime Minister Narendra Modi. That will be a forum to start smoothing over relations after a controversial intervention on migration by Suella Braverman, the home secretary, scuppered hopes for a trade deal last month.

A bilateral is also being organized with the Japanese Prime Minister Fumio Kishida, according to an official speaking on condition of anonymity. In what was among his first foreign policy acts as prime minister, Sunak struck a deal for closer defense cooperation between the U.K. and Japan.

“All eyes will be on the Biden-Xi bilateral, but the U.K.’s bilateral meetings are also an important part of the puzzle — not least of all because you will have the French president and the British prime minister breaking bread in the dynamic Indo-Pacific region,” said Sophia Gaston, head of foreign policy at the think tank Policy Exchange.

“The best way for the PM to capture some of the limelight would be to focus on advancing a few key issues where the U.K. can speak with legitimacy, including climate action, global health and education, and free trade,” she added.

Competent vibes may at least settle the nerves of those weary of trying to engage with an erratic Britain, but Sunak will need more to offer to find his place on the world stage.
#Boris Johnson  #Coronavirus  #Joe Biden  #Johnson
Add Comment