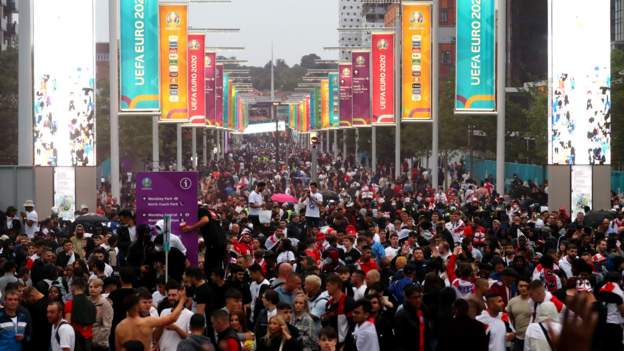 Vaccine proof 'could cause chaos'

"I think if they're going to do this with big football crowds they need to have the resources to do the checks," FSA chairman Malcolm Clarke told Times Radio.

"I'm not convinced that all football clubs will be able to manage that in a way that doesn't cause some chaos."

BBC Sport understands the Premier League and its clubs have already been discussing what approach they will take to check fans on entry to stadiums next season, and how any plans might need to be adapted for each ground.

They are aiming to use the first few games of the season - before any potential rule changes would be brought in - to trial certification.

Prime Minister Boris Johnson announced on Monday there was a plan to mandate certification at nightclubs and "other venues where large crowds gather".

On Thursday, vaccines minister Nadhim Zahawi told the House of Commons that "as a condition of entry" to spectator sport events "people will need to show that they are fully vaccinated and proof of a negative test will not be sufficient".

A capacity crowd of 140,000 attended the British Grand Prix at Silverstone last week - the largest for a sporting event in the UK since the start of the coronavirus pandemic.

There, all adults had to provide proof of full vaccination or a negative test.

"In terms of the practicalities and logistics it will probably be relatively easy because we are all used to working in difficult conditions," he said.

"It will obviously hurt finances but I don't think it will be disastrous for clubs. While it will be unwelcome from a financial perspective, if it's the right thing to do the clubs will do it."

The UK government allowed the crowd capacity at Wembley to be raised to more than 60,000 for the semi-finals and final of Euro 2020.

Permitted under the government's Events Research Programme, fans attending Wembley were required to follow a number of strict entry requirements, including having a negative Covid-19 test or proof of full vaccination.

Chief scientific adviser Sir Patrick Vallance said on Monday that nightclubs and other such venues could be "potential super-spreading events" because of crowds in close contact.

In May, Premier League executive director Bill Bush told the All-Party Parliamentary Group on coronavirus that a "single magic wand like a vaccine passport" would be "too narrow and too prescriptive".

He said he wanted to work with the government on a "broader-based" solution to certification at events.
#Boris Johnson  #Coronavirus  #Vaccines  #COVID-19  #Johnson  #vaccine  #Covid
Add Comment