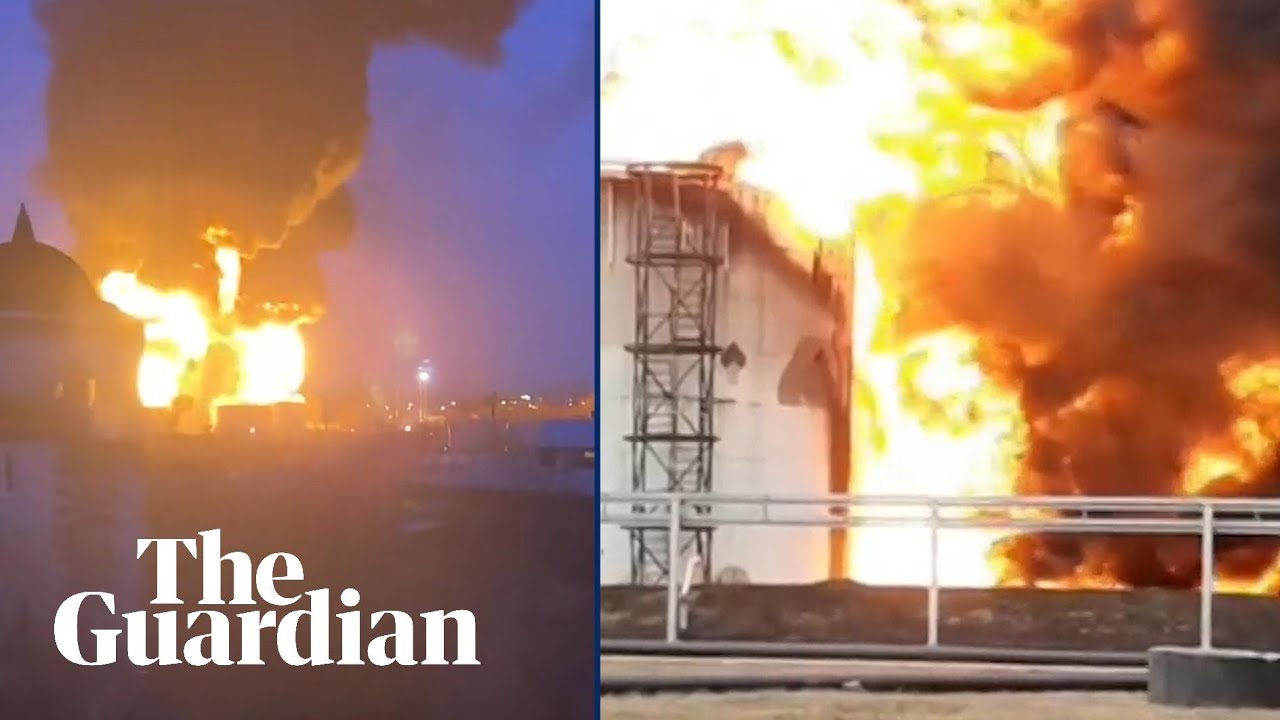 If Moscow’s accusation is true, the airstrike would be first raid on Russian territory so far in the war

Russia has claimed that Ukraine sent attack helicopters across the border to strike an oil storage facility in what, if confirmed, would be the first raid on Russian soil since it launched its invasion.

Ukraine denied that it launched the attack, raising questions about whether Russian negligence may be to blame.

A Russian governor in the border region of Belgorod said that early on Friday two Ukrainian Mi-24 helicopters crossed the border at low altitude before firing rockets at an oil facility 25 miles from the border.

Oleksiy Danilov, secretary of Ukraine’s national security council, denied responsibility for the attack. “For some reason, they say that we did it, but in fact this does not correspond with reality,” he said on Ukrainian television.

Earlier on Friday,the Ukrainian presidential aide Oleksiy Arestovych said: “We are holding defensive military operations on our own territory … Everything that happens on Russian territory is the responsibility of the Russian leadership. All questions to them.”

A number of prominent Ukrainian commentators have claimed that the attack could be a “false flag” meant to justify a Russian mobilisation or scuttle negotiations.

The Kremlin spokesperson Dmitri Peskov fuelled those rumours by saying the attack could hamper negotiations, although he stopped short of announcing any concrete response to the alleged attack.

“What has happened is certainly not something that can be perceived as creating conditions comfortable for the continuation of negotiations,” Peskov said.

Peskov later said that Russia would strengthen its western borders so that “it wouldn’t cross anyone’s mind to attack”, RIA news agency reported. 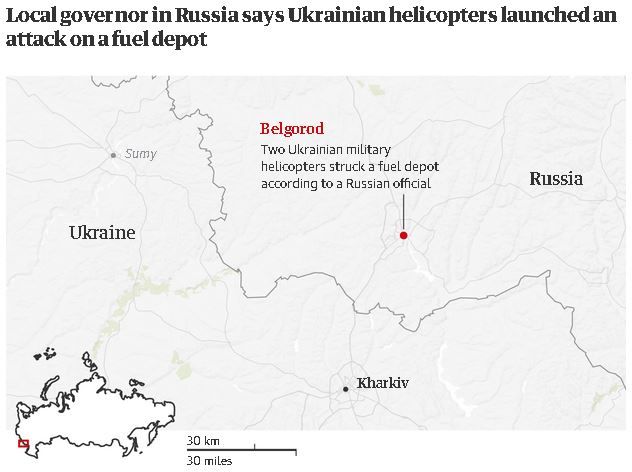 Video posted on social media on Friday appeared to show a helicopter strike using air-to-ground missiles, followed by a major fire at a facility said to be in Belgorod, with flames reaching dozens of metres into the air.

Reports showed that the facility continued to burn until midday on Friday. Dozens of firefighters were dispatched to battle the inferno.

Other videos showed the helicopters, the model of which is used by both Ukraine and Russia, flying in the region. None of these videos have been verified, however.

“The fire at the oil depot occurred as a result of an airstrike from two helicopters of the armed forces of Ukraine, which entered the territory of Russia at low altitude,” said the governor, Vyacheslav Gladkov. “There are no victims.”

Russia’s defence ministry said in a statement on Friday that the facility had been attacked but claimed it did not supply fuel to the military.

Russia has claimed cross-border shelling from Ukraine before, including an alleged attack on an air base in February and an incident last week that allegedly killed a military chaplain, but not an incursion of its airspace. The depot, run by Russian energy giant Rosneft, is about 21 miles from the Ukraine border.

There have been other incidents in Belgorod, which has served as a major hub for Russian military units involved in the invasion of Ukraine.

There was an explosion earlier on Thursday at the site of an arms depot there, raising speculation that saboteurs were targeting the city.

The Russian news agency Tass reported that four service personnel were injured because of that explosion.

The explosions in the Russian rear came after Russia announced it was winding down its offensive toward Kyiv after its troops met heavy resistance in the month-long war. Western officials have warned that Russia may be repositioning its troops for a larger attack on Ukraine’s east.

Ukraine’s president, Volodymyr Zelenskiy, said in late night address on Thursday that Russia was consolidating and preparing “powerful strikes” in the country’s east and south. “This is part of their tactics,” he said.

“We know that they are moving away from the areas where we are beating them to focus on others that are very important… where it can be difficult for us,” he said.