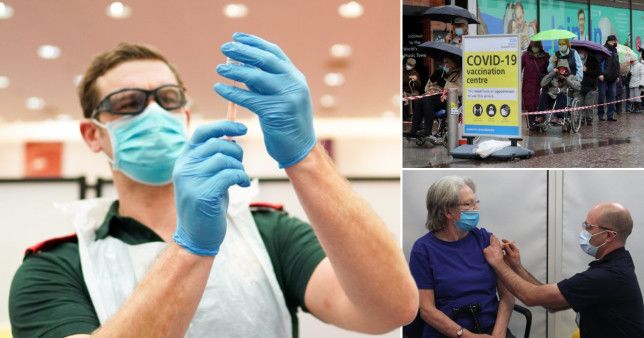 Half the number of black people have had a jab compared with white people, despite being four times as likely to die with the disease.

The vaccines minister declared himself ‘very concerned’ about the figures, as the first hard evidence emerged of BAME groups being less likely to take up Covid-19 vaccines.

There have long been concerns that minority groups are less likely to take up the jab because of concerns around trust, but limited official data official data until now.

On Sunday morning, vaccines minister Nadhim Zahawi said the public would be hearing more from the Government on how it plans to ensure those from ethnic minorities take up the Covid-19 vaccine.

‘The 15% that are vaccine hesitant skew heavily towards the BAME community and especially afro-Caribbean black communities and of course other Asian BAME communities’, he said.


There are fears that previous mistreatment of people of colour by the health service, coupled with misinformation and low levels of trust have meant less people from non-white communities are signing up for jabs – though uptake is still high.

Professor Martin Marshall, Chair of the RCGP, like Mr Zahawi, called for high-profile figures from BAME communities and faith leaders to campaign for greater vaccine uptake.

He said: ‘Vaccines only work if people take them and we know that our patients from black, Asian and ethnic minority communities have been impacted by Covid in more severe ways than other groups – with an increased risk of severe symptoms, more hospital admissions and in the worst cases, deaths.

‘Ensuring that all our patients, particularly those who are considered high-risk, receive the vaccine when offered it must be addressed urgently.’

He continued: ‘Society is changing, but we know that historic issues within healthcare and the wider society have, understandably, left some communities with mistrust and concerns.

‘The best way to address these concerns is to ensure that they are heard and provide as much information and clarity as possible, but this information has the potential to be ignored if messages aren’t delivered by people who BAME communities can relate to and have confidence in.’

Speaking to Sky News’ Sophy Ridge On Sunday, Mr Zahawi said there were also plans to deliver messages in languages that people feel comfortable with.

He added: ‘This is an important issue. We are focusing on it and you will see more from us, with the NHS, so we deliver for all communities.’