UK weather: Snow and ice cause travel disruption around UK

Snow and ice are continuing to cause widespread travel disruption across the UK.

The coldest night of the year so far saw heavy snow fall in Scotland and south-east and eastern England, with delays hitting road, rail and air travel.

Schools from Cornwall to the Scottish Highlands were forced to close.

The Met Office has issued fresh snow and ice warnings covering large parts of the UK on Tuesday morning.

Scotland is on course to record its coldest December in over a decade after temperatures plummeted to -15.7C in Aberdeenshire.

More than 140 flights due to serve UK airports were cancelled because of ice and snow - with Stansted, Gatwick, Luton and London City among the worst impacted. Flights from other airports - including Belfast and Aberdeen - were also cancelled due to poor weather at other airports.

Londoners have also been facing severe difficulties getting around on Monday, with most Tube lines experiencing delays or part closure. There have been delays on several London Underground lines - as well as the London Overground - including the Central, District, Northern and Piccadilly lines, according to Transport for London (TfL).

Railway lines - particularly in the south-east and east of England - continue to be disrupted, with services being cancelled. The cold weather prompted Southeastern Railway to advise passengers not to travel after cancelling the first early morning trains on all routes to allow safety checks. 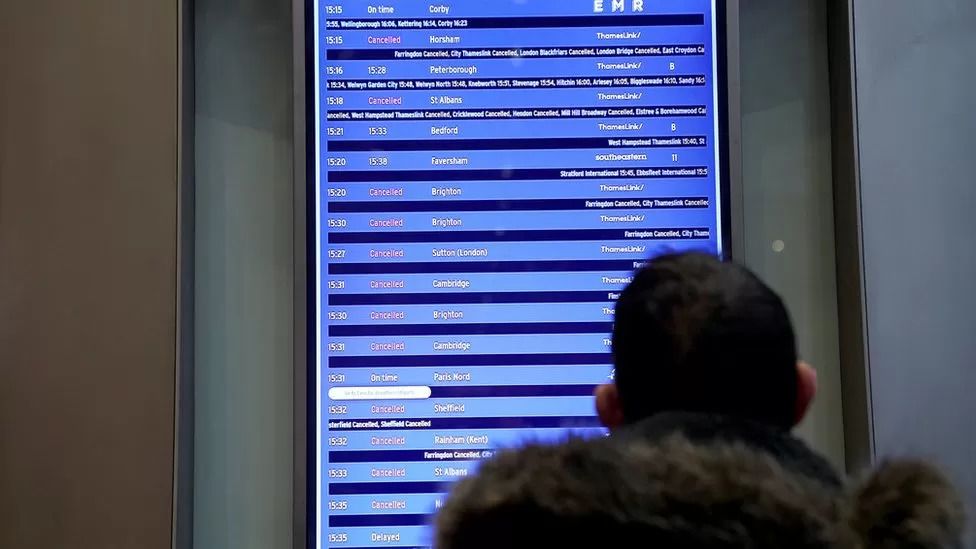 Snow and ice has caused travel disruption across much of the UK on Monday
Driving conditions across the UK remain difficult. The AA said that although the snow has made for a "beautiful winter wonderland", it also created a nightmare scenario for motorists. Some caught up in chaos last night on the M25 and M11 reported being stuck in their cars for more than eight hours overnight.

Drivers in Burwash, East Sussex, decided to abandon their cars altogether and took refuge in a pub after snow made roads impassable and dangerous. About 40 people took shelter in the Bear Inn, which opened its doors to those stranded, providing hot drinks, log fires, and mattresses for children.

Warnings remained in place on the M25, with drivers advised to take care when travelling due to snow and ice. Although a section that had been shut between junctions 23 and 25 has now reopened, warnings are still in place.

Police and fire services have warned parents to remind their children of the dangers of ice following the deaths of three boys, aged eight, 10 and 11, who fell into an icy lake near Solihull, in the West Midlands, on Sunday.

*  Children should not go on the ice under any circumstances


*  Whenever possible, stick to well-lit routes away from water


*  Keep dogs on a lead when they're near the ice, and don't throw sticks or toys onto the ice


*  If a pet falls in, do not go onto the ice or into the water to rescue them, move somewhere where the dog can climb out and call them to you

It will continue to be a cold week for the vast majority of people in the UK - temperatures are not due to rise by much, and snow and ice will be persistent in many regions.

Although more snow is not expected, the Met Office urged people to be careful as it issued a weather warning for ice for the east Midlands, the south-east and east of England, saying that lying snow and icy patches will lead to difficult travel conditions into Tuesday.

This could make some untreated roads, pavements and cycle paths dangerous and lead to injuries from slips and falls.

Parts of Scotland have a weather warning for snow and ice stretching into the week until midday Thursday.

The rest of the week will stay bright but cold conditions mean frost and fog overnight will be slow to clear in places.

The latter part of the week could bring yet more snowfall, or perhaps rain if a transition to milder weather gets underway as expected.

Despite sub-zero temperatures across the country, is a concern that many people may put off turning the heating on to warm their homes due to the exceptionally high cost of energy.

However, Age UK spokesperson Sophie Barrett urged people to put the heating on and ensure it reaches a level high enough to stay warm at home.

At low temperatures, those who already have poor heart health and the elderly become even more susceptible to serious health issues.

WATCH: Cars and a bus crash amid Gloucester's heavy snow