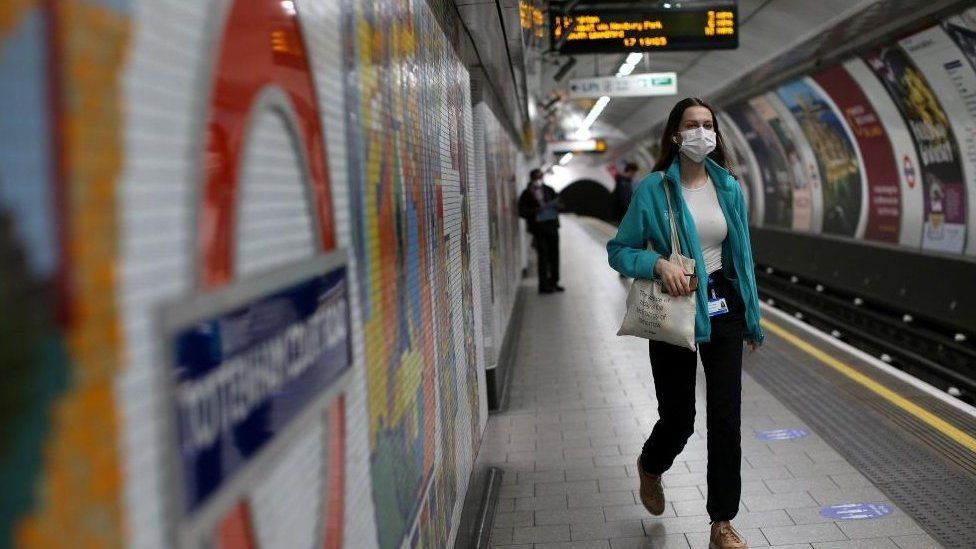 Coronavirus infections are continuing to decrease around the UK, Office for National Statistics data shows.

The figures, for the seven days up to 12 February, reveal fewer people are testing positive for the virus in the community than in recent weeks.

Experts warn that infection levels remain high however, with about 553,000 people found to have the virus.

And another 533 people in the UK have died within 28 days of a positive coronavirus test.

Daily figures show there were a further 12,027 new cases of coronavirus recorded in the UK on Friday. 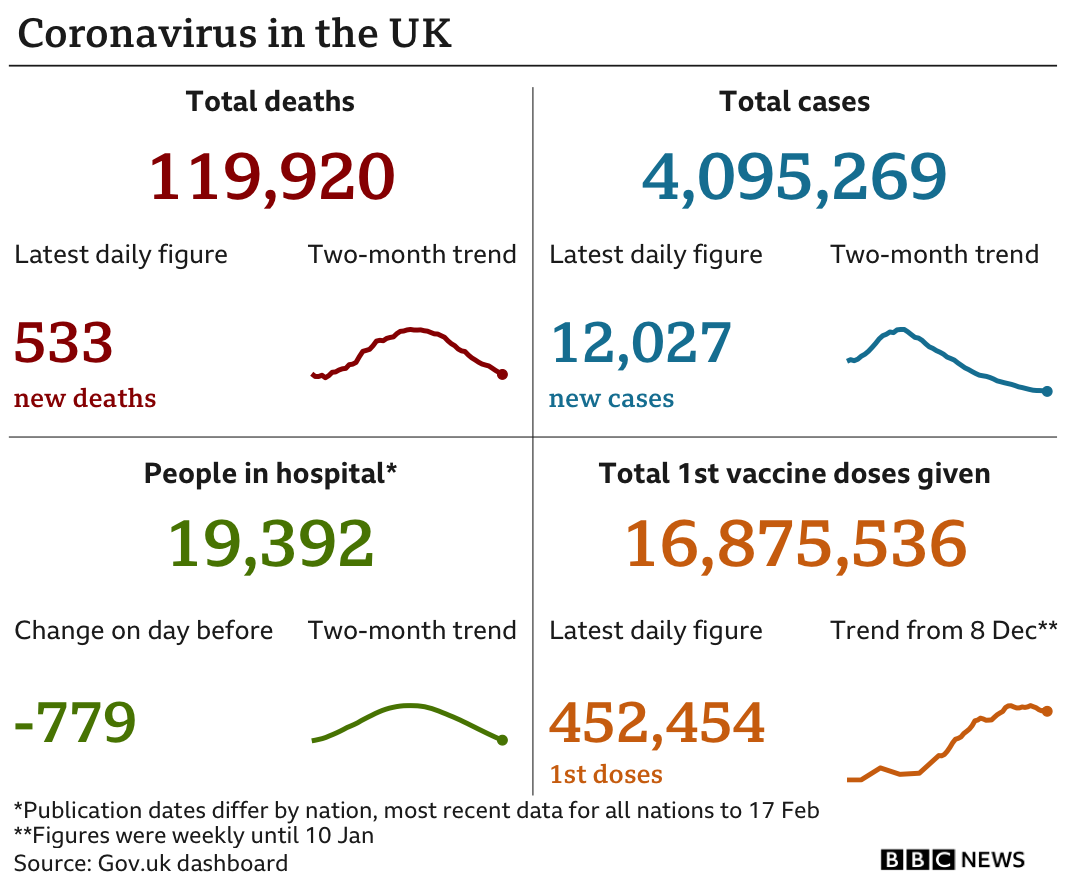 More than 16.8 million people have had their first COVID vaccine dose, while 589,591 have had a second jab, bringing the total number of shots since the rollout began to nearly 17.5m.

The latest R number, estimated to be between 0.6 and 0.9, also suggests infection numbers are shrinking. It means that, on average, every 10 people infected will infect between 6 and 9 other people. 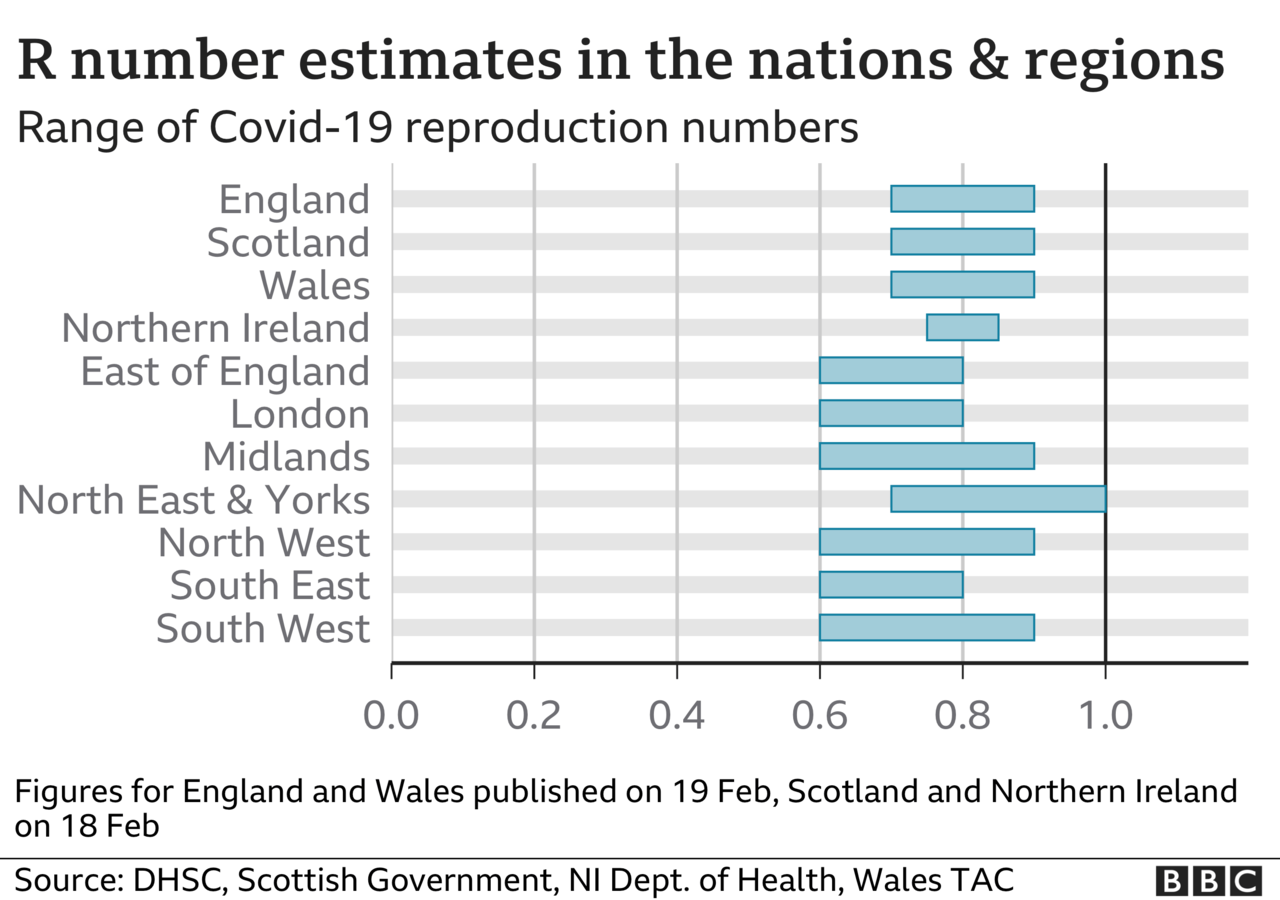 Other studies of infection rates have shown a similar "strong" decline.

The ONS results, based on tests from people whether or not they had symptoms, suggest:

In England, there is some regional variation in the infection rate, although it is decreasing in all areas.

North-west England had the highest proportion of people of any region in England likely to test positive for coronavirus - at around one in 85 people. 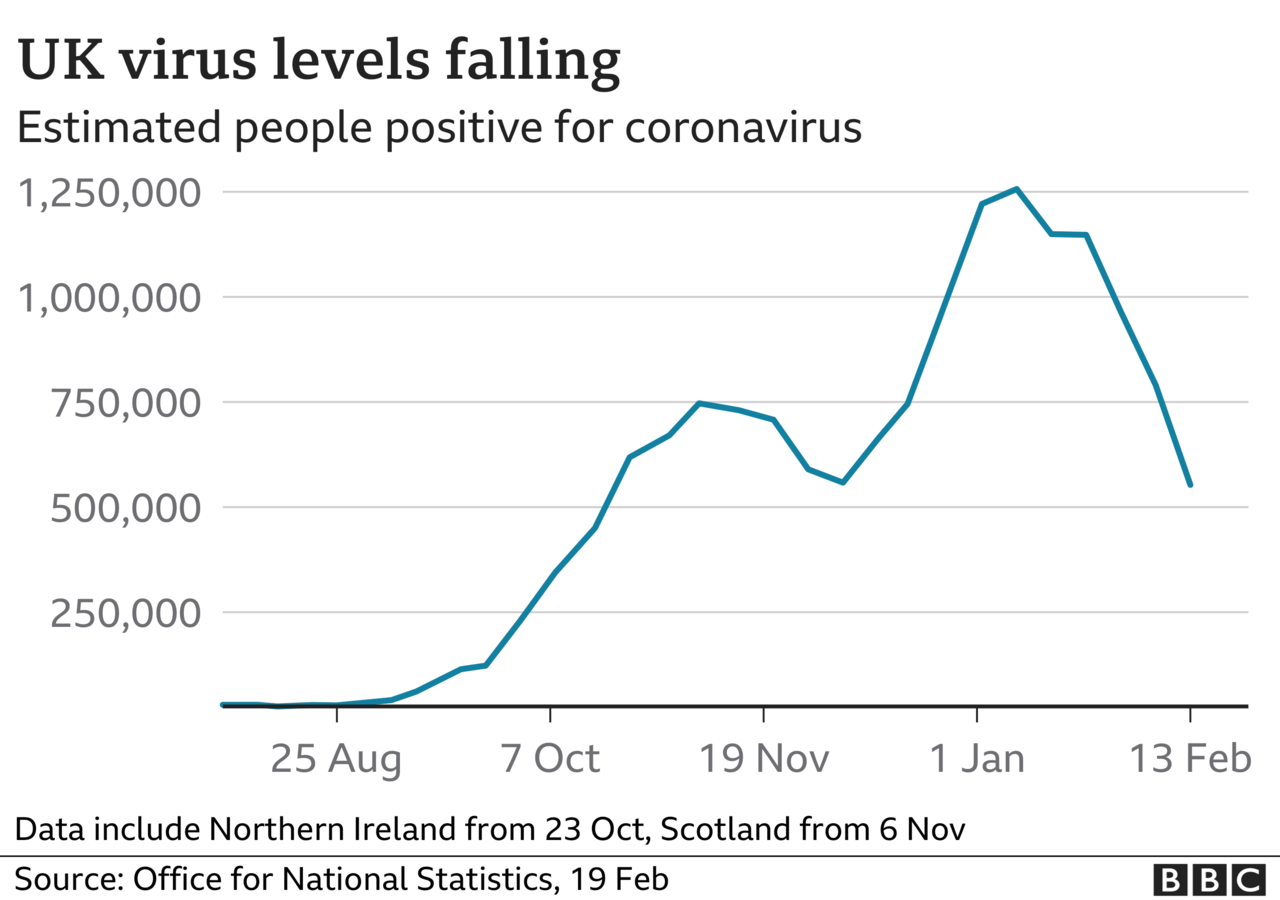 Elsewhere, the estimates are:

* one in 125 people for eastern England

It comes as Prime Minister Boris Johnson prepares to receive new data on the effect of vaccines on the spread of coronavirus, ahead of Monday's publication of a roadmap for easing the lockdown in England.

Downing Street has refused to comment on the likely contents of the unlocking plan amid press speculation.

The Welsh government has already announced some changes. From Saturday, four people from two different households will be allowed to exercise outdoors together. And from Monday, children in Wales aged between three and seven are returning to school - as are young children in Scotland.

Experts say any unlocking should be done slowly and cautiously to avoid a rebound surge in cases. There is still plenty of the virus circulating that people can catch.

Prof Neil Ferguson, whose modelling prompted the first lockdown last March, told BBC Radio 4's Today programme that he was hopeful more restrictions could be lifted by the end of May.

"We will still have rules in place but... I think society will be a lot more normal."

Meanwhile, Foreign Office minister James Cleverly said it was wrong to speculate on whether summer holidays will be allowed this year: "I get how frustrating this is, it's completely natural. We all want to get a break from this, I get that. But it would wrong for me to start speculating now.

"We are assessing the numbers, we are making a judgment based on the science and we will be making an announcement on Monday. I can't go further than that."

A continued fall in new infections is one of the reassuring signs PM Boris Johnson will be considering this weekend, along with advisers, to decide if, when and how to start lifting some restrictions in England.

R is below 1, even with more infectious variants of the virus circulating, which is good news too.

But within the wider UK figures there are some regional differences that are worth keeping an eye on. Infection rates appear to be higher in some urban areas of England, for example.

Lessons from last year tell us that the virus can take off again if you unlock too quickly or too soon. 'One size fits all' may not be the best approach for every type of easing, although a shared priority is to get children back to school.