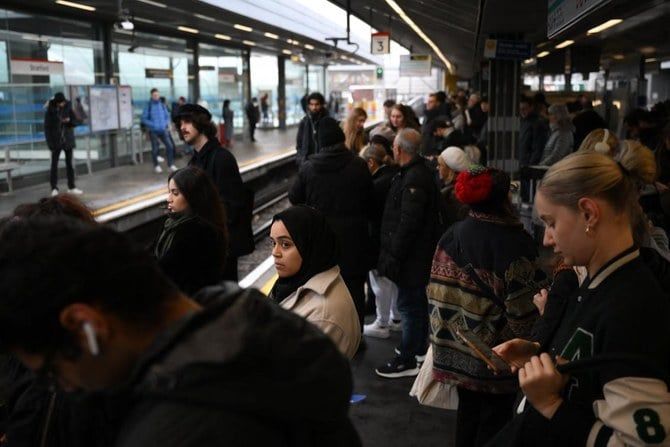 UK rail workers on Tuesday began a two-day national strike, kicking off a month of walkouts involving professions from nurses to passport control workers that could spell Christmas misery for millions.
Commuters faced a battle to get to and from work, while many opted to stay at home, as thousands of members of the country’s biggest rail union the RMT launched their latest stoppage over a below-inflation pay offer.

Braving the ice and snow that has already hit travelers, activists picketed major railway stations Tuesday, as train services wound down and people were advised only to travel if essential.

At London’s Kings Cross station, Allan Smith, a 28-year-old web developer, said he had sympathy with the strikers, despite struggling to get to Heathrow airport.

“I totally get it. It’s hard for the people at the moment,” he told AFP.

Former firefighter Chris McBride, 74, blamed “incompetent government” for the chaos, with more stoppages planned between now and into the New Year.

The UK is experiencing a wave of industrial action on a scale not seen since the 1980s, with inflation in double digits pushing up the cost of living and energy costs soaring due to the war in Ukraine.

Postal workers are staging a two-day strike from Wednesday, while nurses are set to walk out for the first time in their union’s 106-year history on Thursday, again over pay.

Rail workers will hold another two-day strike from Friday, when they will be joined by bus drivers, highway workers and airport baggage handlers.

Border Force staff checking passports at major airports including Heathrow and Gatwick will strike over Christmas.

RMT members on Monday rejected an 11th hour pay offer from Network Rail, which owns the UK’s railway infrastructure, leading its staff, along with workers from 14 train companies, to walk out.

Network Rail had offered its workers a pay rise of five percent backdated for this year and a further four percent at the start of 2023.

RMT general secretary Mick Lynch told AFP: “We’re looking for some compromise, we need an improvement in the pay offer, which is way below inflation.”

He said Network Rail wanted to “impose changes that are not acceptable” and “the government is provoking this situation.”

Network Rail boss Andrew Haines was pessimistic over chances of a breakthrough, as the government urged the RMT to call off the strikes.

“I’d have to say that with the level of disruption the RMT are imposing, the way forward isn’t obvious,” he told BBC television.

The government has also urged unions to call off planned strikes that will hit health care and mail delivery over the Christmas period.

Prime Minister Rishi Sunak told the BBC the government was “taking a reasonable and fair approach,” saying pay offers for public sector workers are in many cases higher than in the private sector.

“I’d ask the union leaders, to engage with that and end this disruption, particularly at Christmas time. It’s going to make an enormous negative difference to people’s lives,” Sunak said.

Talks between the government and the Royal College of Nursing (RCN) ended without agreement on Monday night.

RCN general secretary Pat Cullen told the BBC that “this government has turned their back on” nurses.

Up to 100,000 nurses in England, Wales and Northern Ireland will walk out on Thursday and on December 20, prompting the government to put the army on standby.