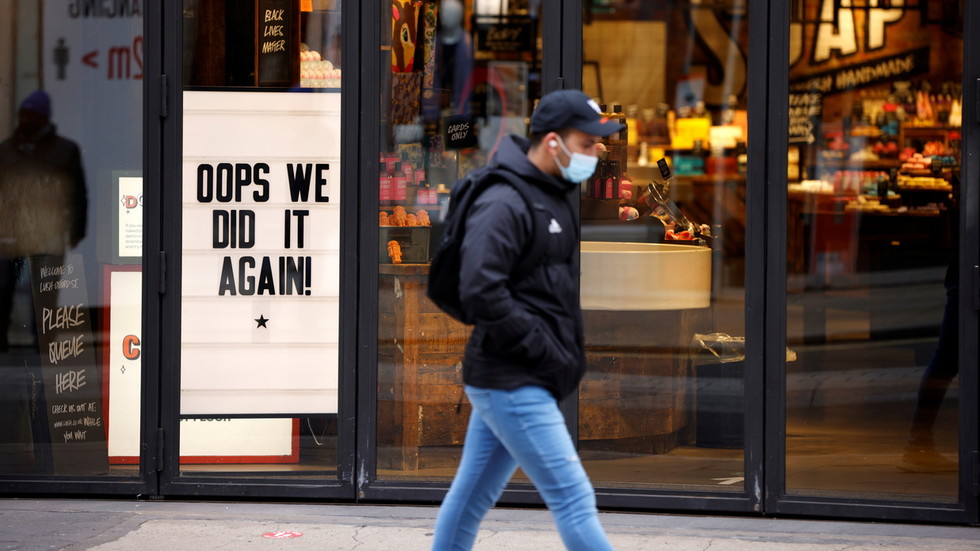 The UK could be heading for a post-Christmas lockdown, in which Brits would be forbidden from gathering indoors. Across Europe, governments are rolling out fresh restrictions to deal with the Omicron variant of Covid-19.
Although the Omicron variant of the coronavirus is highly transmissible and appears more resistant to vaccines, its symptoms have been described as only mild to moderate. Nevertheless, the UK may be returning to the restrictions of last spring, according to a report in the Times on Friday night.

According to the report, ministers will present proposals to Prime Minister Boris Johnson in the coming days advocating for a return to levels of restriction not seen since April, when the UK was in ‘Step 2’ of its roadmap out of full-on winter lockdown. These restrictions would see indoor gatherings banned except for work purposes and outdoor service only in bars and restaurants.

This new lockdown could be in place as soon as December 27, and is described as a “circuit breaker” to slow the rapid rise in daily cases, which hit a record 93,000 on Friday. Despite the alarming surge in cases, Covid-related deaths have steadily fallen since early November, and ten times fewer people are dying with the virus now than at the beginning of the year.

The Times’ sources said that Parliament may be recalled early next week to debate the proposals, which have not yet been formally considered.

Johnson has thus far insisted that he is not in favor of “closing things down.” Despite Omicron’s apparent resistance to the current crop of vaccines, he has promoted booster shots as the main means of defeating the variant, promising this week to get every English adult a booster dose by the New Year.

His government is not the only one discussing another round of lockdowns. Ireland on Friday introduced earlier closing times for pubs and restaurants, effective Monday through to the end of January. In Denmark, Prime Minister Mette Frederiksen also announced a raft of new restrictions including crowd limits and mask mandates in stores and the closure of entertainment venues, pending parliamentary approval.

In the Netherlands, government health advisers have recommended the closure of all but essential shops and services, with Prime Minister Mark Rutte due to make an announcement on Saturday evening.
#Boris Johnson  #Coronavirus  #Vaccines  #COVID-19  #Johnson  #Covid
Add Comment