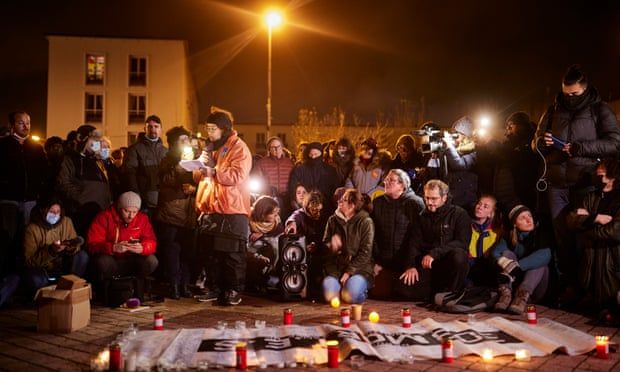 More lives will be lost in the Channel unless urgent action is taken to stop “playing politics with people’s lives”, ministers have been warned as desperate refugees vowed to keep attempting the perilous journey.

The grim prediction came as investigators tried to identify the bodies of at least 27 people, including a pregnant woman and three children and thought to be predominantly Kurds from Iraq, who drowned on Wednesday.

Images of their deflated grey rubber dinghy floating in the sea brought home the horror of the tragedy on Thursday, while a chilling mayday call emerged in which the made by French coastguard operator alerts ships to multiple bodies in the water. But cross-party MPs, experts and campaigners raised fears that the tragedy could be repeated.

Residents of makeshift camps around Calais and Dunkirk told the Guardian that hundreds of people have travelled to northern France via Belarus following a crisis on its border with Poland. Many vowed to pursue their plans to cross to the UK in search of a better life – and throughout Thursday new arrivals continued to come ashore in Dover.

On Thursday night Boris Johnson wrote to the French president, Emmanuel Macron, setting out five steps to avoid a repeat of the drownings. They include joint patrols to prevent boats leaving French beaches; technology such as sensors and radar; reciprocal maritime patrols and airborne surveillance; better intelligence-sharing to arrest and prosecute people smugglers; and a bilateral returns agreement with France alongside talks to establish a UK-EU returns agreement.

Macron earlier defended Paris’s actions but said France was merely a transit country for many migrants and more European cooperation was needed to tackle illegal immigration.

“I will ... say very clearly that our security forces are mobilised day and night,” Macron said during a visit to the Croatian capital Zagreb, promising “maximum mobilisation” of French forces, with reservists and drones watching the coast.

Damian Collins, the Conservative MP for Folkestone, told the BBC that more deaths would happen if the French did not increase patrols of the northern beaches. Priti Patel, the home secretary, said it was up to the French to take action to prevent further tragedies.

Humanitarian groups agreed that more deaths were likely but differed over the potential solutions, instead pushing for the UK government to introduce new safe and legal routes as well as bolstering existing ones such as resettlement schemes. Beth Gardiner-Smith, the chief executive of Safe Passage International, called on Patel to resign and warned more tragedy was to come.

“More and more people are risking the freezing, frightening journey across the Channel in small, unstable boats since the government closed safe routes to the UK last year,” she said. “Choosing to play politics with people’s lives, the government has failed to prevent people risking the crossing and this is the result.”

In the shadows of a disused warehouse in Grande-Synthe, east of Calais, Shivan told reporters he had travelled from Iraq to France and would continue with his plans to cross. “We just want to live. We’re not scared to cross. It’s better to cross.”

The drowning victims appear to have been predominantly Kurds from Iraq and included 17 men, seven women – one of whom was pregnant – and three children. Two male survivors, an Iraqi and a Somali, were being treated for exhaustion and hypothermia in a Calais hospital.

A criminal investigation has been opened by the public prosecutor in Lille, with five men arrested in connection to the incident. The fifth suspect, held on Thursday morning, had been driving a car with German number plates and had “bought inflatable boats in Germany”. 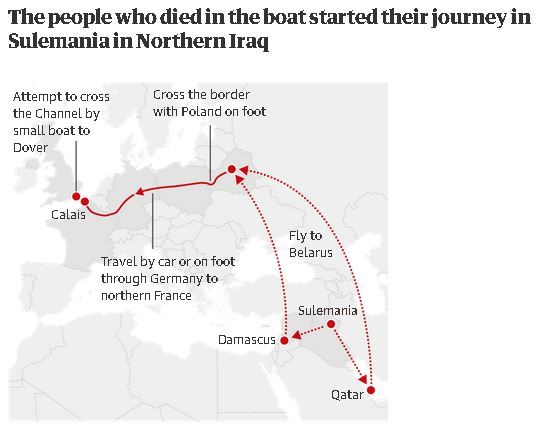 The boat, carrying at least 29 people, was believed to have set off from Loon-Plage near Dunkirk. They had most likely been camping out in the dunes near Grande-Synthe.

People waiting to cross in Grande-Synthe told the Guardian that many of them had arrived via Belarus, which was accused of creating a border crisis with neighbouring Poland in retaliation for EU sanctions. The increase in people who have arrived in Calais via Belarus underlines the increasingly complicated picture that European governments face in tackling the refugee crisis.

The Home Office declined to comment on the impact of the Belarusian crisis on migration flows, while the UK government doubled down on its position with the French. Johnson, who held a Cobra meeting on Wednesday to discuss the incident, suggested the French government had not always approached the problem of the crossings “in a way we think the situation deserves”.