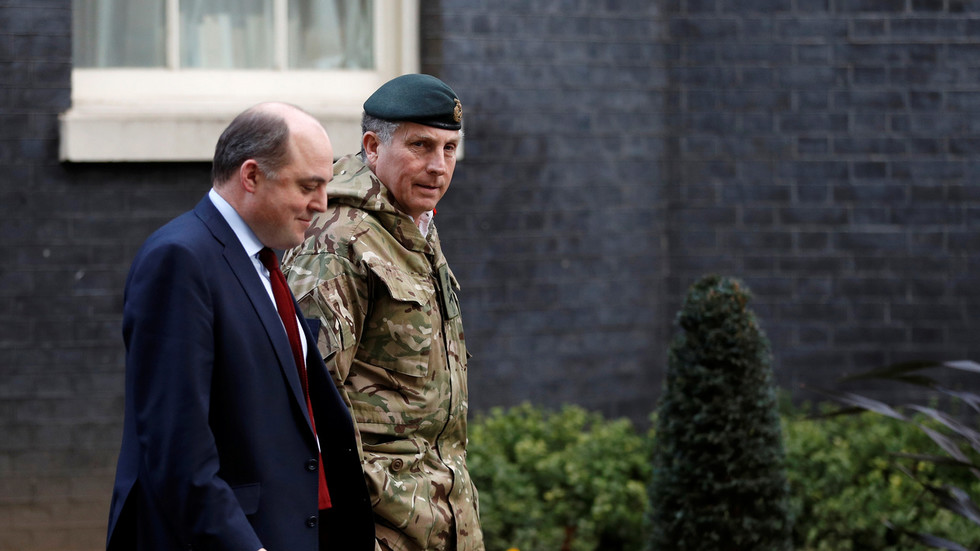 UK Defence Secretary Ben Wallace and a group of senior commanders have been ordered to quarantine after the head of the country’s armed forces tested positive for coronavirus, complicating military decision-making.
Wallace, as well as the heads of the Royal Navy, Royal Air Force and Strategic Command were alerted by the NHS Test and Trace app that they must self-isolate for 10 days due to the fact that they had interacted with General Sir Nick Carter, Chief of Defence Staff, last week.

Carter entered into his own 10-day isolation period after he tested positive for the virus on Friday, the Telegraph reported. The Ministry of Defence confirmed that Britain’s top serving general had returned a positive test and that his colleagues were self-isolating in line with government health guidelines.

The chief of defence staff was present at a high-level meeting on Thursday that included Wallace as well as some of the most senior-level brass in the UK military. Among the attendees were Admiral Sir Tim Fraser, Vice-Chief of the Defence Staff; General Sir Mark Carleton-Smith, Chief of the General Staff, First Sea Lord Admiral Sir Tony Radakin, and Air Chief Marshal Sir Mike Wigston, Chief of the Air Staff. General Sir Patrick Sanders, who leads the UK’s Strategic Command, was also at the meeting and was reportedly instructed to self-isolate.

All those who were ordered to self-isolate will conduct their business remotely. But one defence source who spoke with The Telegraph claimed that some discussions and sensitive materials would need to wait for in-person meetings, as remote-work platforms were too insecure.

The insider told the paper that there was going to be a lot of “disrupted” schedules due to the changes and that there will need to be “quite a bit of readjustment” at the top levels of the Defence Ministry to keep things running smoothly.

The development comes a day after an MoD employee allegedly left a dossier of classified documents detailing the UK navy’s recent incursion into Crimean waters at a bus stop in Kent. The sensitive documents were then handed over to the BBC. Moscow has raised questions about the purportedly unintended document leak, describing it as a provocative distraction.

The UK military brass aren’t the first senior British officials to go into self-isolation. Former UK Health Secretary Matt Hancock quarantined at his home in January after being contacted by the NHS app. Prime Minister Boris Johnson also spent time in quarantine, after testing positive for the virus and later being hospitalized with the disease.
#COVID-19  #Covid  #Coronavirus  #Boris Johnson
Add Comment