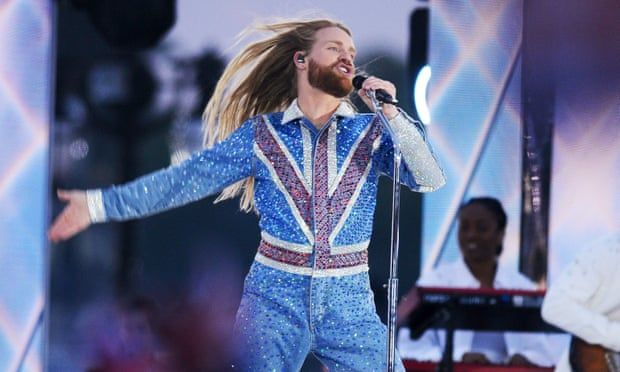 Organisers decide with ‘deep regret’ winner is unable to stage song contest, so runner-up could step in
The UK has been offered the chance to host Eurovision in 2023 after the song contest’s organisers concluded that Ukraine is not capable of hosting it, a decision that has angered the nation’sgovernment, which says it still wants to hold the event.

Ukraine won this year with Kalush Orchestra’s Stefania, as viewers across the continent came together to vote for the song and show solidarity with the nation after Russian’s invasion.

Tradition dictates that the winner is offered the chance to host the next year’s contest. But the European Broadcasting Union (EBU), which organises the competition, said it had “with deep regret” concluded that it would not be possible to provide the security and operational guarantees required to hold the contest in Ukraine.

It has asked the BBC to host next year’s competition, after the UK finished in second place with Sam Ryder’s Space Man.

Sources with knowledge of the discussions suggested that it is far from a done deal that the UK will end up as host and suggested that Brussels could be preparing a rival bid.

The Ukrainian government is unhappy with the conclusion that it cannot safely host the event, which would mean missing out on a major opportunity to focus the world’s attention on the country and what it has endured.

Its culture minister, Oleksandr Tkachenko, has already sent a series of potential venues in Ukraine to Eurovision’s organisers.

He reacted angrily to the EBU’s announcement and suggested that moving Eurovision to the UK would undermine his country: “We honestly won Eurovision and have fulfilled all the conditions within the deadlines for the process of approving its holding in Ukraine – we have provided answers and guarantees on safety standards and possible venues for the competition.

“Hosting Eurovision 2023 in Ukraine is a strong signal to the whole world that it supports Ukraine now. We will demand to change this decision because we believe that we will be able to fulfil all the commitments, as we have repeatedly emphasised to the European Broadcasting Union.”

There is also a suggestion that the EU is working on a rival bid to move next year’s contest to Brussels, where it would be hosted on behalf of Ukraine in a symbolic gesture of solidarity from the “capital of the EU”.

A Downing Street spokesperson said they still hoped Ukraine would host the contest but that if it was held in the UK they would make sure it reflected “Ukraine’s rich culture, heritage and creativity, as well as building on the ongoing partnership between our two countries”.

The EBU said: “The Eurovision song contest is one of the most complex TV productions in the world, with thousands working on, and attending, the event and 12 months of preparation time needed.”

It said, after a lengthy investigation, the required guarantees could not be provided by Ukraine’s public broadcaster and expressed “sadness and disappointment” that next year’s contest could not be held in Ukraine. “As a result of this decision, in accordance with the rules and to ensure the continuity of the event, the EBU will now begin discussions with the BBC, as this year’s runner-up, to potentially host the 2023 Eurovision song contest in the United Kingdom.

“It is our full intention that Ukraine’s win will be reflected in next year’s shows. This will be a priority for us in our discussions with the eventual hosts.”

The competition was last held in Britain in 1998 after the UK won with Katrina and the Waves’ Love Shine a Light. Hosting Eurovision is a logistical and financial challenge and could be a test for the BBC, which is already struggling with financial cuts and redundancies.

A BBC spokesperson confirmed that the broadcaster was in talks about hosting the event.

If the BBC agrees to host the contest, cities across the UK are likely to be keen to stage it. Glasgow’s 14,000-capacity OVO Hydro Arena has been speculated about as a potential venue in recent days based on its potential availability. Manchester, London and Leeds also expressed interest on Friday.

However, the BBC has yet to agree to host the contest, with sources emphasising that it is too early to start speculating on venues.

Estimates on the expense of hosting the competition vary, although the BBC is likely to need to put together a substantial funding package with government support.

This year’s contest, in Turin, required millions of euros in funding from the city’s local government, in addition to cash from the Italian state. However, the competition attracts tens of thousands of tourists to the host city, which boosts the local economy.

The last time the winning Eurovision country did not host the following year’s contest was in 1980, when Israel’s national broadcaster turned down the chance to take part on cost grounds.
Add Comment