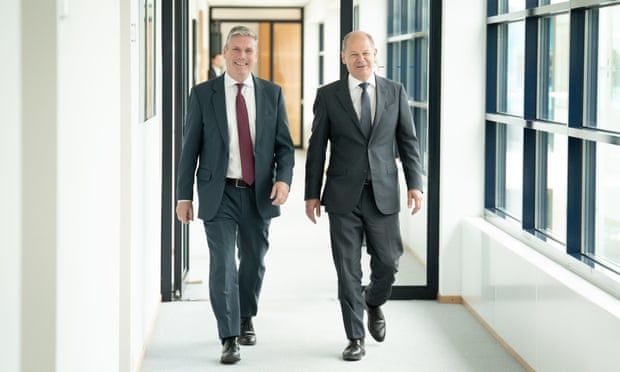 Keir Starmer has dismissed the acrimonious Conservative leadership race as a “travelling circus”, in which the candidates have demolished their party’s economic credibility by promising billions of pounds of unfunded tax cuts.

Speaking on a visit to Berlin where he held talks with the German chancellor, Olaf Scholz, the Labour leader highlighted the “fanciful” spending pledges made by the five contenders battling it out to succeed Boris Johnson.

“They’ve just shot through their economic credibility,” he said. “And of course although he’s now dropped out, one of the individuals making these claims was the actual chancellor – and obviously the former chancellor’s in the travelling circus as well.”

Buoyed by discussions with the centre-left Scholz, from Labour’s sister party the SPD, who pulled off a surprise win in last December’s election with a campaign promising “respect”, Starmer dismissed the idea that a new Tory leader could rebuild the party’s reputation.

“It’s a party that has got no sense any more of what it stands for,” he said. “That’s why you have all these candidates scratching each other’s eyes out, taking lumps out of each other.”

Asked if the Tories could see a bounce in their poll ratings once Boris Johnson leaves Downing Street and a fresh leader takes over, Starmer insisted he was unconcerned.

“We’ll have to see what happens, but it feels like a football team that is dragged into the relegation zone, can see the drop, and is desperately trying to change the manager in the hope and belief that that’s going to make the difference. It doesn’t work in football and it’s not going to work for the Conservative party.”

He said the past few days, which have seen all the candidates apart from Rishi Sunak promise to reverse planned tax increases, with most also pledging to ramp up defence spending, had reinforced his determination to fight the next election on the economy.

“Labour has got itself into the position where we can fight an election and win an election – and we want to fight that election on the economy. We’re not going to fight it on issues such as the NHS, because we’re the custodians of the NHS and everybody understands that,” he said. 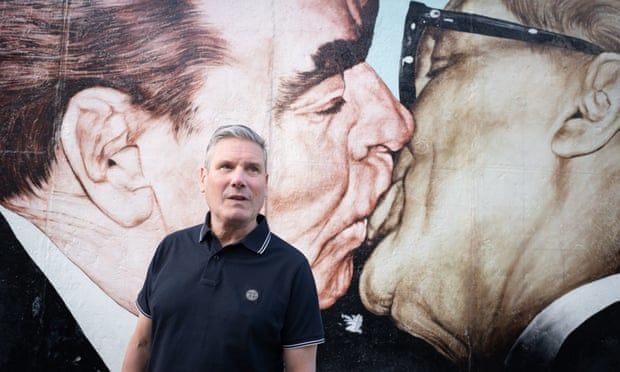 Keir Starmer walks past a section of the Berlin Wall known as the East Side Gallery on the second day of his two-day visit to the German capital.

He highlighted weak economic growth, stagnant real wages and rocketing inflation, warning that Johnson’s “zombie government” would be unable to tackle the cost of living crisis, with annual energy bills expected to hit as much as £3,000 in October.

The shadow chancellor, Rachel Reeves, used a speech this week to hammer home her determination to be tough on public spending. She highlighted Labour’s fiscal rules, which would ensure the party only borrowed to invest, while promising to reduce national debt as a share of the economy over time.

Starmer said all the Tory leadership candidates should be challenged on how they would fund their tax and spending pledges – by slashing public services, or increasing borrowing.

“We’re dealing with a very real cost of living crisis - people literally unable to pay their bills – and you’ve got a Conservative party leadership race that is completely divorced from reality,” he said. “They’re making fanciful, uncosted pledges in relation to spending commitments.”

He also raised concerns about some candidates’ hints that the government’s net zero policies could be weakened as a result of pressure from the party’s right wing. “Abandoning the net zero commitment is just utter irresponsibility,” he said, highlighting the “huge opportunities” for green jobs in new technologies.

Labour believes Starmer’s two-day visit to Berlin, where he met business leaders as well as Scholz and other politicians, underlines his prime ministerial credentials.

The two leaders discussed Labour’s stance on Brexit in more detail, which involves a series of practical steps aimed at “making Brexit work”, such as trying to negotiate mutual recognition of professional qualifications and a veterinary agreement to reduce trade frictions.

Labour also hopes that by adopting a more conciliatory approach over the Northern Ireland protocol – instead of the government’s combative stance – it could establish a more positive relationship in other areas.

“What an incoming Labour government will bring to the table is a very high level of trust and respect around the negotiating table in the discussions we need to have with the EU and other countries worldwide – and a very firm commitment that when we sign international agreements, we will abide by them,” Starmer said.

Despite having championed the cause of a second Brexit referendum while on Jeremy Corbyn’s frontbench, he now considers the matter closed, and has resisted pressure from some in his party to advocate a return to the customs union or the single market.

Starmer is expected to face the disgraced Johnson for a final prime minister’s questions next Wednesday, with a new leader likely to be in place when the House of Commons returns from its summer recess in early September.