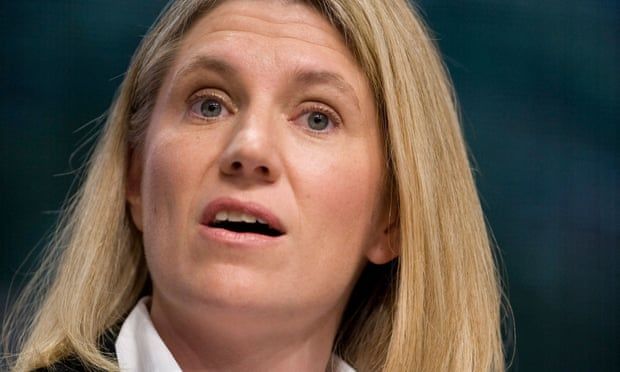 Sources say Philippa Stroud had been put under pressure and told she may lose the Conservative whip
A prominent Conservative peer withdrew her name from a key amendment to the borders bill, amid a “fierce whipping operation” to secure the controversial nationality and borders bill.

The government was defeated three more times in the Lords, meaning a further potential standoff between peers and MPs including on asylum seekers’ right to work.

The home secretary, Priti Patel, was among those personally lobbying Conservative peers on Tuesday night in a series of tight votes in the House of Lords that will see at least three amendments to the nationality and borders bill return to the Commons.

Philippa Stroud, who was a key figure behind Conservative rebels’ failed efforts to force the government to reverse the £20-a-week universal credit cut, had tabled an amendment to give asylum seekers the right to work after six months.

But sources in the Lords said Lady Stroud had been put under pressure – claiming she had been told she may lose the Conservative whip – and the amendment was eventually put in the name of Labour’s Ruth Lister. The amendment passed the Lords by a single vote.

Peers described a major Tory whipping operation to try to secure the bill before recess, with Lords promised the opportunity to socialise in order to coax them to stay for late night voting. Despite three defeats, peers passed one of the bill’s most controversial measures, the offshoring of refugee claimants.

At least 66 Tory MPs and peers had given their backing to the proposal, via a letter to the prime minister last month, urging a change to the bill to let asylum seekers work after six months, rather than a year.

One senior Tory called the proposals in the bill “morally indefensible and economically illiterate” but said there was very little appetite from the government for compromise.

Labour is facing a dilemma on whether to keep on with a “ping pong” of the bill, though sources said they were still hopeful of being able to force some concession before parliament is prorogued on Thursday. If Lords return the bill to the Commons yet again, MPs may be forced to sit next week to pass the bill.

A Labour source in the Lords said: “We’re clearly hitting a brick wall with the home secretary who appears overly focused on ramming this legislation through and ignoring carefully thought-through advice from peers across the House about why aspects of this bill are unworkable.”

Previously just two MPs, Simon Hoare and Tim Loughton, rebelled in the Commons when the amendment was returned to the Lords but more MPs, including the former cabinet minister Robert Buckland, have been working to try to reach a compromise.

Current rules mean asylum seekers may be granted permission to work if a decision on their claim has been delayed for more than a year. Any job must be on the Home Office’s shortage occupation list until their claim is approved or rejected.

Lords returned the nationality and borders bill to the Commons on Tuesday night, as part of the “ping-pong” on amendments that mean MPs will get another chance vote on amendments on Wednesday.

The bill has suffered a string of 12 defeats in the Lords at the last debate. On Tuesday, peers debated six amendments including the right to work, new stringent conditions on “offshoring” refugees in the wake of the Rwanda proposal from the government, and removing the provisions that criminalise arrivals in the UK.

Six amendments were put to peers on Tuesday night, with three defeated by the government including the offshore processing of refugees in Rwanda. One Tory said there was limited appetite for rebellion on that issue from centrist Tories and crossbenchers because there was a widespread belief the policy would never happen because of legal challenges or extraordinary costs.

MPs will debate two other Lords amendments, one from Labour’s Shami Chakrabarti on refugee convention protection and one which would not disqualify refugees who made brief stopovers in other countries.
#Priti Patel
Add Comment