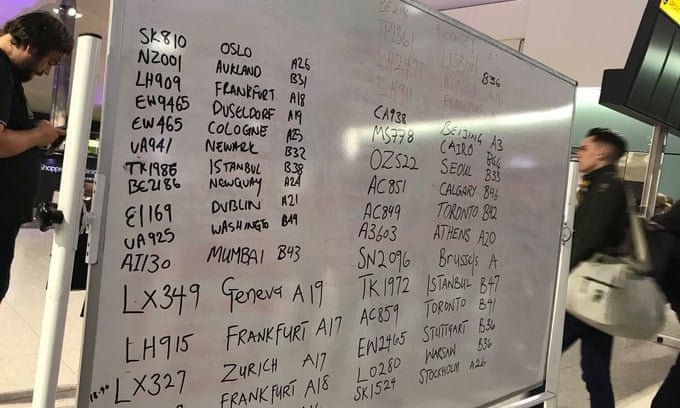 Thousands stranded at Heathrow due to check-in systems meltdown

Heathrow airport has apologised after thousands of passengers had their flights cancelled or severely delayed because of technical issues affecting its departure boards and check-in systems.

The situation at the airport on Sunday was described on Twitter by one passenger as “utter chaos”, while another shared pictures of whiteboards displaying handwritten flight numbers and destinations.

Heathrow stated on Sunday night that the issue had been resolved, with the west London airport – Europe’s busiest – aiming to resume normal service on Monday and operate its full schedule. However, it noted that some airlines’ operations may continue to be affected by Storm Dennis and Sunday’s technical issues.

A Heathrow spokesperson said: “We apologise for the inconvenience this has caused our passengers. Our teams will continue to monitor our systems and be on hand across our terminals to provide assistance to passengers as we work to resume our regular operations.”

Several customers also reported issues with the Heathrow app, which appeared to be sending a stream of push notifications about the coronavirus. Heathrow has not confirmed if this was related to the IT issue affecting its check-in systems, but said in reply to one Twitter user: “We are aware of this issue and apologise for the inconvenience. Thank you for your patience.”

The airport’s biggest airline, British Airways, reportedly cancelled 20 flights. The airline explained that the cancellations were the result of Heathrow’s technical issues alongside the disruption caused by Storm Dennis.

“We’ve introduced a flexible booking policy and have brought in extra colleagues to help our customers, providing them with overnight accommodation if needed,” a British Airways spokesperson added.