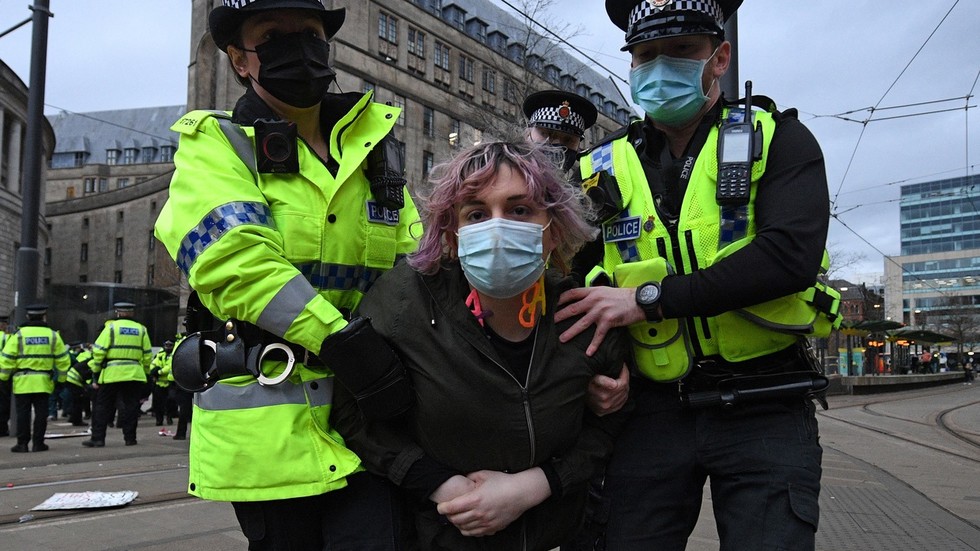 Under an opaque fast-track legal process that bypasses court hearings, thousands of people in England and Wales have reportedly been prosecuted for Covid-related offences with activists alleging widespread miscarriages of justice.

Figures from a parliamentary answer this month revealed that 4,242 cases under coronavirus health protection regulations were disposed of last year through the controversial single justice procedure (SJP) system.

In the SJP process, rulings in non-imprisonable crimes – such as lockdown violations or non-payment of TV licensing fees – are decided by a single magistrate, rather than the usual bench of three, largely on police evidence and in consultation with a legal adviser.

A legal notice is sent to inform defendants of the SJP charges and it is left up to them to respond online with a plea within 21 days. In 90% of the Covid-related cases, a decision was made with no plea entered, according to The Guardian.

Last month, a Crown Prosecution Service (CPS) audit of the 1,821 cases charged under Covid laws (between March 26, 2020 and March 31, 2021) and heard in open court in England and Wales identified 549 instances where defendants were wrongly charged.

About 18% of the prosecutions brought under the health protection regulations – which have varied over the pandemic to include restrictions regarding leaving home, social gatherings, self-isolation, travel and the wearing of face coverings – were found to be incorrectly charged.

In addition, all 270 charges brought under the Coronavirus Act (2020) – the main criminal offence of which relates to suspected positive individuals refusing to be screened for Covid-19 – were dropped since there was no recorded case of a potentially infectious person refusing to co-operate with police or public health officers.

The audit attributed cases brought in error to “wrong iterations of the rules, which have changed frequently, being used. Some cases were also discontinued due to insufficient evidence.”

In a letter to the justice secretary last month, a coalition of civil liberties groups called for a review of all such criminal prosecutions related to the Covid rules. SJP cases are currently not reviewed by the CPS.

“Considering the significant rates of unlawful charges found by the CPS’ reviews, we can assume that a sizeable number of these unreviewed charges will also be unlawful,” the letter noted.

A recent report on pandemic policing by a parliamentary Joint Committee on Human Rights cautioned that the SJP was an “inadequate tool to provide the necessary fair trial protections” to defendants charged with coronavirus laws so “lacking in clarity” that they have been “poorly understood” by law enforcement authorities, leading to “so many mistakes.”

Indicative of the confusion surrounding the rules, there were reportedly eight SJP prosecutions under schedule 21 of the Coronavirus Act – which relates to “potentially infectious persons” – despite the fact that SJPs are only supposed to be used for violations of the health protection regulations.

In a tweet, UK-based civil liberties group Big Brother Watch noted that there were 37 people prosecuted unlawfully under schedule 22 of the Coronavirus Act – dealing with “events, gatherings and premises” – since that provision had “never been activated by ministers.”

“The single justice procedure is justice on the cheap and is completely inappropriate for assessing charges under confusing lockdown laws,” Madeleine Stone, the group’s legal and policy officer, told The Guardian.