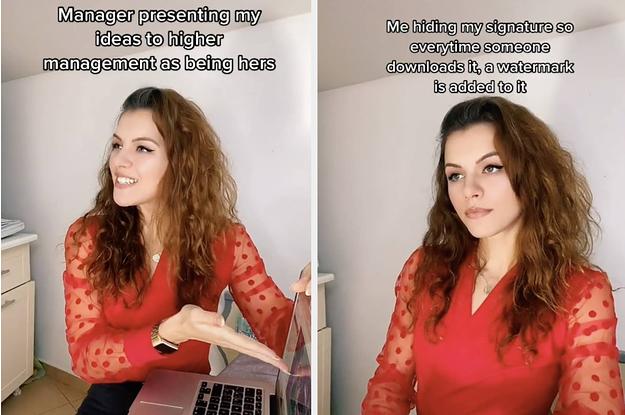 This Woman's Boss Kept Taking Her Work, So She Added A Hidden Signature To Her Presentation, And It's Deliciously Petty

If you've ever had a boss present your work as if it were their own, then you and 25-year-old Cristina Sevcenco are two in a world of many disgruntled employees waiting for this toxic industry standard to change.

Cristina told BuzzFeed that back in 2019, she was hired for her first corporate job — which Cristina would like to remain unnamed — and she spent two weeks conducting market research that developed incredibly strong insights. Shortly after presenting the findings to her manager, "I walked by an office and saw my work being presented in a room full of very powerful people," she said. "However, my name was not once mentioned. ... It broke my heart."

"Although my manager once told me that I would rarely be the one presenting my work for the higher management, she never told me that they wouldn't even bother to change anything in the presentation BUT MY NAME," she said.

After stumbling on the scene, Cristina later decided to speak with her boss about how uncomfortable the situation made her. "I tried explaining to her. ... It was never about promotions or bonuses, it was more about their recognition and their pat on the back for me," she said.

Furthermore, Cristina felt that her manager was propelling their own career forward on the back of her labor without offering any credit where it was due. "I told her that at that moment, I was leveraging her manager performance, but my to-do list was full to the top with unfinished projects," she said. "She did not flinch an eye about this subject — quickly brushed it off and moved on to the next."

So, instead of letting her work continue to be passed off as someone else's, Cristina hid her signature within the presentation. This way, whenever someone downloaded the PowerPoint, her watermark — a faint, digital signature — was unremovable.

Over 3.7 million people have viewed Cristina's viral TikTok video about the tug-of-war between her and her boss, most of whom asked for a watermarking tutorial...

...because, unfortunately, this is a lot more common than one might think.

The 25-year-old is hesitant to advise others to follow her lead, though. After discovering the signature, Cristina said her boss instructed her to remove it, resend the project, and never do it again. "Days later, she asked her manager to talk to me about 'how things work around here,'" Cristina shared. "My career definitely slowed down. She didn’t give me as many projects anymore, [and] she was talking to everyone about how to perform better, [except] me. Later on, I found out they replaced me and I had 21 days to find another job." 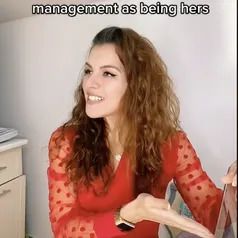 Since then, Cristina started working for another company, but now she's focusing on freelancing and her own business pursuits. In hindsight, she said, "I think [managers passing off work as their own is] common because in this field of work, it’s like a lion cage. You need to fight your way up. Literally. No matter who gets hurt."

"[My manager's] boss was the same," she continued. "I truly believe [my manager] wasn’t a bad person, but she was made that way by her manager."

When considering how this practice could be brought to a halt, Cristina thinks managers should remember that they work with people — not just employees.

"Sometimes people forget that they work with people, for people," Cristina concluded. "It doesn’t always have to be a competition. We can work together to grow. We don’t need to steal from each other. We can learn from each other and be better — create a better [workspace]...where everyone is supported and appreciated. But sometimes, I feel like that’s just a dream."

Has your boss ever taken your work and passed it off as their own? If you're comfortable sharing, let us know in the comments what happened. Or, if you'd like to remain anonymous, use this Google form.