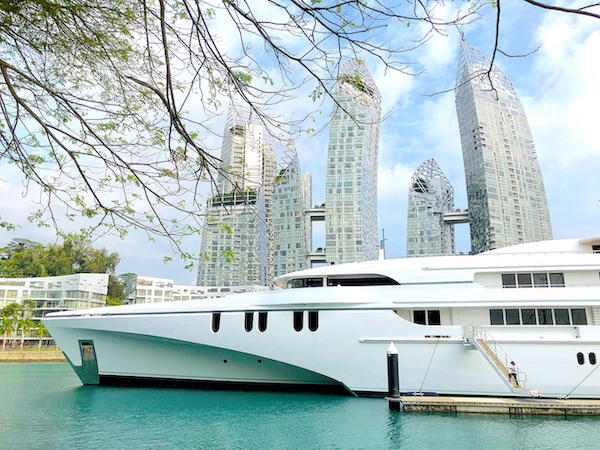 When Singaporean car dealer Keith Oh first read the Facebook message, he wasn’t sure it was real. A Chinese client ordered a S$1.1 million ($830,000) Bentley-sight unseen-over the social network.

“They just asked for the price and when we could do the delivery, that’s all,” he said. “It’s a million dollars to us but it’s probably nothing to them.”

The quick sale was the latest sign of a wider trend: Money is sloshing around Singapore like never before. As the coronavirus pandemic hammers Southeast Asia and political turmoil threatens Hong Kong, the city has become a safe harbor for some of the region’s wealthiest tycoons and their families.

For rich people “who can decide where they want to live and settle down, Singapore is a place of choice now,” said Stephan Repkow, who founded Wealth Management Alliance in 2015 after four years at Union Bancaire Privee. He said two of his foreign clients had become residents in the past 12 months and more are on the way.

Singapore has long been a draw for wealthy Chinese, Indonesians and Malaysians who would come for short trips to shop, play baccarat at the casino or get medical check-ups at world-class clinics. Mount Elizabeth Hospital Orchard, just steps from the flagship stores of Gucci and Rolex, features a UOB Privilege Banking Centre in the lobby.

The pandemic has changed all that, prompting many tycoons and their families to stay for months, in some cases seeking residency to ride out the storm. On a per capita basis, the mortality rates in Malaysia and Indonesia are more than 10 and 30 times higher than in Singapore, according to data collected by Johns Hopkins University.

The number of single family offices in the city-state has doubled since the end of 2019 to about 400, including firms recently set up by Google co-founder Sergey Brin and Shu Ping, the billionaire behind Chinese hotpot empire Haidilao International Holding Ltd. Demand for private golf club memberships is soaring, real estate prices have jumped the most since 2018 and until the recent clampdown, Michelin-star restaurants were packed. Global banks like UBS Group AG meanwhile are expanding in the city to manage the massive influx of assets.

A spike in virus cases that’s led to stricter border measures and the cancellation of upcoming events such as the World Economic Forum meeting may pause some of the rich migration to Singapore, but it’s likely to be short-lived.

While cases have jumped to a few dozen a day, it’s a far cry from the several hundred daily infections in New York City alone. Singapore is also charging ahead with vaccines: It’s given enough jabs for 30% of the population, almost twice the rate in China and even further ahead of neighboring Malaysia and Indonesia.

It’s a delicate balance for Singapore, which relies more on trade and open borders than just about any other Asian nation. Locking down and restricting travel for too long would make it unattractive to global investment and talent, while failing to control the virus risks a political backlash and its reputation as a safe regional hub.

“Our recent spike of pandemic is very unfortunate, but we will eventually go through this phase again,” Repkow said. “Singapore is resilient and able to manage crisis in a very pro-active and efficient manner.”

Seletar Aiport, the hub for private jets, has seen demand for hangar space soar during the pandemic, said Alan Chan, head of business development at the 67 Pall Mall wine club, who until November was an executive at Go-Jets.

One private jet pilot who declined to be identified said it’s still extremely difficult to snare a spot. While the recent strict travel rules have extended to people with their own aircraft, he added that most expect them to ease in line with commercial flights after a few weeks.

Singapore doesn’t divulge many details on its super-rich migrant residents, but private bankers, multi-family offices and other service providers say the new arrivals are helping their businesses, in a city famous as the setting for the “Crazy Rich Asians” film.

One top banker who declined to be identified said Chinese clients ranked first among new account openings, followed by those from India and Indonesia. Another said that client meetings—once a tortuous process of flying to Jakarta and fighting traffic—had become much easier because many of his Indonesian customers were staying in the same luxury condominium in Singapore.