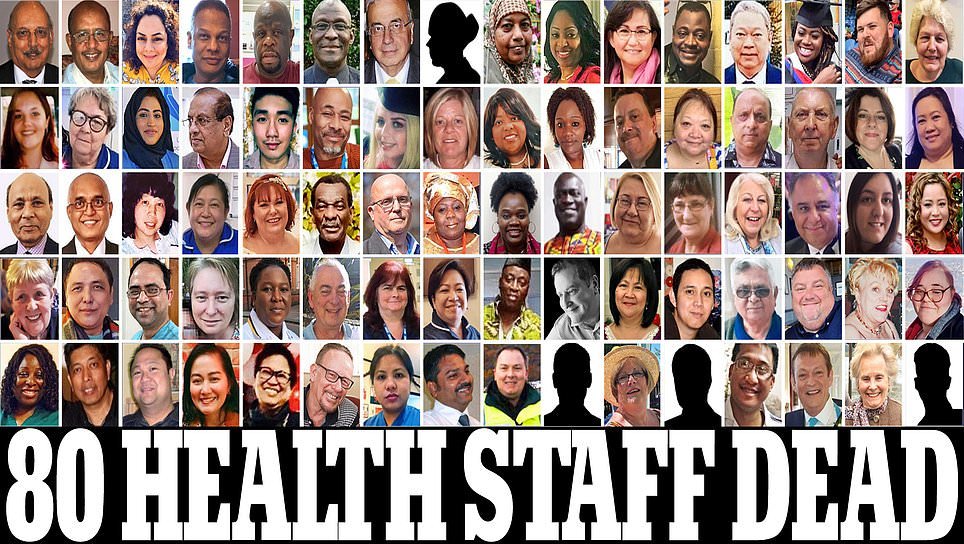 The death toll among NHS and care home staff, from heart surgeons to volunteers, has reached at least 80

Doctors have warned they could stop treating coronavirus patients to protect their own lives as equipment shortages become critical.

Hospitals are on the brink of running out of some life-saving supplies today after a vital delivery of 400,000 protective gowns from Turkey was delayed.

Medical bodies say the shortages mean doctors could be forced into a 'difficult decision' between exposing themselves to the virus or 'letting a patient die on their watch'.

It led to a chorus of criticism that those fighting in the frontline against the virus are being betrayed as the Government fails to 'get a grip' on the escalating crisis.

The warnings came as:

Health Secretary Matt Hancock admitted on Friday that medical gowns could run out within days, and official new guidance was issued telling staff to consider reusing some personal protective equipment.

NHS chiefs say they had pinned their hopes on the delivery of 84 tons of equipment from Turkey to 'avert an absolute crisis over the weekend'.

The RAF flight carrying the supplies was due to land in Britain yesterday morning – but it was delayed for at least 24 hours, meaning some hospitals could run out altogether today.

Niall Dickson, chief executive of the NHS Confederation, which represents health service managers, said: 'This is very serious and makes a difficult situation worse. 'It would have been better had the Government not made the announcement in the first place. It now looks more likely that supplies of gowns could run out in some places.'

Organisations representing intensive care doctors said their members are facing 'increasingly difficult decisions'. They pledged to support any doctors who feel they have to down their tools due to inadequate PPE.

The British Medical Association said the delay was 'devastating' and that shortages could force doctors to consider 'withdrawing from the frontline'.

Chairman Dr Chaand Nagpaul said: 'Given the Health Secretary's warning of the possibility of full-sleeved gowns running out altogether in some hospitals this weekend, doctors were banking on the Government's announcement of imminent extra supplies of PPE from overseas.

'Healthcare workers desperately need proper and effective protection now – by whatever means possible. This really is a matter of life and death. Doctors and healthcare staff... are left fearful for their own health and safety – this is shameful.'

He added: 'They are treating their own colleagues in intensive care on ventilators and tragically see some of them not survive.'

Professor Neil Mortensen, president elect of the Royal College of Surgeons, said: 'Like all doctors, surgeons are committed to saving lives. If the gowns run out they will be left between a rock and a very hard place.

'Do they put themselves, their colleagues and their families in the firing line, or do they take the risk of a patient dying on their watch for want of an operation?'