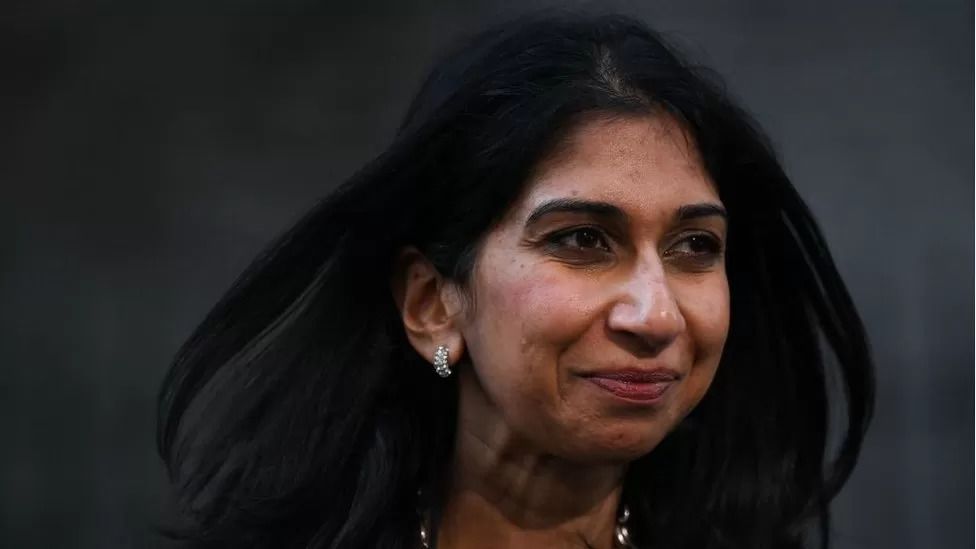 An email sent from Suella Braverman's personal account on the day she had to resign over a security breach could throw fresh doubt over her claims about the speed with which she took action.

The email, seen by the BBC, told the recipient of a highly sensitive message that Ms Braverman had sent in error to "delete and ignore" it.

She has said she reported the mistake "rapidly" to officials.

But the BBC understands it took hours for her to respond.

Ms Braverman quit as home secretary 10 days ago because she had breached security rules relating to email use. She was then reappointed by new Prime Minister Rishi Sunak.

Her reappointment has drawn criticism, with calls for an inquiry and Labour demanding Mr Sunak "comes clean" and releases assessments of the security breach.

In her defence, the home secretary said "as soon as I realised my mistake I rapidly reported this on official channels". She said she reported it to the cabinet secretary - the head of the civil service.

But the BBC understands she sent the original email from her personal Gmail account to the wrong person, a member of parliamentary staff, at 7:25 BST on 19 October.

At 8:30 the recipient sent her a message saying that it had been sent in error.

At 10:02 a message was then sent from the home secretary's personal Gmail account saying: "Please can you delete the message and ignore".

It is understood the chief whip at the time, Wendy Morton, was told what had happened around half an hour later by the office that had received the message in error. Ms Morton then urgently tried to track down the home secretary to discuss the issue, it is understood.

One source told the BBC there was no evidence that Ms Braverman had raised the incident herself before she was confronted with the mistake later that afternoon, and subsequently had to resign.

But a source close to Ms Braverman said around 12:00, she instructed officials to raise the breach with the cabinet secretary. That is still more than four hours after her original email that broke the rules and two hours after she had asked the recipient to "delete and ignore".

"The home secretary has been clear that once she realised she'd made this error of judgment she proactively reported it on official channels.

"These events need to be seen in the context of a very packed schedule. She recognises she made a mistake, apologised and offered her resignation to the PM," the source said.

Ms Braverman had sent the document to her own Gmail address, before sending it on. Ministers are not permitted to send government documents to personal accounts, or to share further.

Levelling Up Secretary Michael Gove told the BBC he was glad the prime minister had given Ms Braverman "a second chance", describing her as "a first-rate" politician.

Asked about the home secretary's email, he said "I am sure there are lots of inferences that can be drawn" but added it would be inappropriate to "rush to judgement".

He said it would have been "quite proper" for the home secretary to ask the recipient to delete and ignore the message. "That is standard practice," he said.

She argued that the email added "to the serious list of questions that we now have about the reckless reappointment of Suella Braverman to be home secretary... it goes to the heart of Rishi Sunak's error of judgment."

Ms Cooper has also said her party "will use every parliamentary mechanism open to force government to come clean over her reappointment, to get answers and to require detailed documents to be released to the Intelligence and Security Committee".

Meanwhile, Green Party MP Caroline Lucas said Ms Braverman's appointment has undermined the prime minister's promise to have integrity "at every level of his government. "He has failed at the first hurdle," Ms Lucas said.

WATCH: I am satisfied Braverman coming back was right - Gove