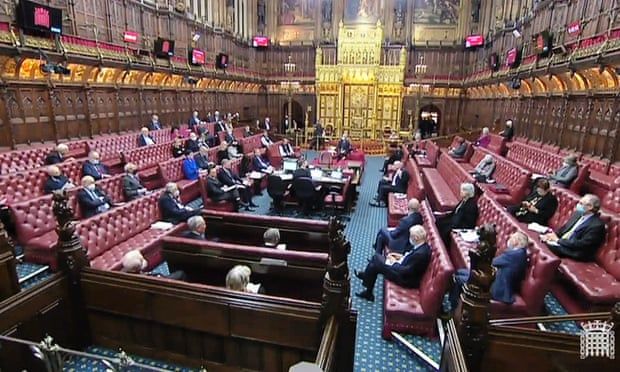 String of Lords defeats reflects concerns over PM and legislation

Analysis: Peers have inflicted greatest number of defeats on government in single parliamentary session since 1975-76
In the aftermath of Boris Johnson’s landslide 2019 general election win, many assumed the political balance within the House of Lords had swung squarely behind the Conservatives after a decade of ennoblements by Tory prime ministers.

David Cameron and Theresa May had between them elevated 136 Conservatives to the upper chamber over the proceeding nine years. By November 2021, Johnson had ennobled 83 people to become life peers, 42 of whom are Conservatives, while many others were fellow Brexit supporters.

On Monday, the policies at the heart of the Johnson government’s nationality and borders bill were defeated in the Lords on five occasions.

The vote removed a key plank of the bill, known as clause 11, which would have stripped refugees arriving here via irregular routes of full rights such as a right to a family reunion and access to a public safety net. Peers voted by 204 to 126, defeating the clause by a majority of 78.

The same bill suffered further significant defeats on Wednesday. Peers voted to ditch home secretary Priti Patel’s plans to introduce offshore processing centres for people seeking asylum in the UK. They also voted for an amendment led by the Labour peer Alf Dubs to open a new safe route for unaccompanied child refugees in Europe to reunite with family here in the UK.

Most of these were reversible in the Commons because they represented changes to the bill, but Priti Patel had tried to add 18 pages to it, including a series of new public order offences aimed at preventing a recurrence of last year’s Insulate Britain and Extinction Rebellion protests.

The Conservatives are by far the biggest grouping in the upper chamber. They have 258 peers and might expect to be able to count on the support of many of the 39 non-affiliated peers such as Ian Botham, Kate Hoey and Claire Fox, who were sponsored by Johnson. Labour Lords in comparison account for 168 members, while the Lib Dems have 83.

But to win votes, the government has to also win over some of the 183 cross-bench peers – who operate as a grouping but without a whipping operation – and 25 bishops.

According to Angela Smith, Labour’s leader in the Lords, the size, complexity and controversial nature of the bills now coming before parliament means that they can easily be challenged.

“We are getting these mega bills that are so badly drafted that peers can see glaring problems. Many Conservative peers do see themselves as guardians of the constitution. They believe that you should look at the detail and they want to see good legislation coming out of the Downing Street machine,” she said.

Another problem for Johnson, she said, is that a large number of Conservative peers are not happy with the prime minister in the aftermath of partygate allegations and no longer identify with the party’s leadership or culture.

“These are very strange times politically. A Brexiter Tory member told me the other day: ‘This isn’t the Conservative party that I joined, I am very uncomfortable with the changes.’ There is a general unhappiness and malaise on their backbenches,” Smith said.

One cross-bench peer, who is no fan of Johnson, pointed out that many of his appointments were not showing up to vote. He gave the example of Evgeny Lebedev, the Russian son of a KGB officer and owner of the Evening Standard and the Independent. He was elevated to the Lords in July 2020 but has not voted yet or made a single contribution in the chamber.

There is also concern on the red benches that there is a tendency for ministers to make laws that are constructed to avoid line-by-line scrutiny.

Two Lords reports issued in November, one entitled Government by Diktat and the other Democracy Denied, warned that bills often provided only a broad outline of the law, with the details to be filled in later through secondary legislation, which cannot be amended and can become law without parliamentary debate.

Dr Hannah White, the deputy director of the Institute for Government, said the growing number of government defeats appeared to reflect concerns about the government’s laws. “This could indicate concerns in the House of Lords about the quality of the legislation and the powers that ministers are giving themselves in primary legislation,” she said.

After so-called “ping pong” between the two houses – when legislation is pushed back and forth between the upper and lower chamber – the government of the day often pushes laws through eventually, despite Lords defeats.

But Johnson is facing congestion in the parliamentary programme which may force concessions. Each defeat increases furious lobbying of MPs and ministers over contentious parts of their planned laws, which can in turn prove to be problematic for the whips.

Responding to the figures, a government spokesperson in the Lords said that despite not having an overall majority, ministers still won on average a third of votes in the Lords.

“Given the arithmetic of the house, if Labour, the Liberal Democrats and independent members of the house combine to oppose the government, then the government simply cannot win. While the House of Lords can ask the Commons to think again on an issue, it is ultimately the will of the elected house that should prevail,” the spokesperson said.
#Boris Johnson  #Priti Patel  #Johnson
Add Comment