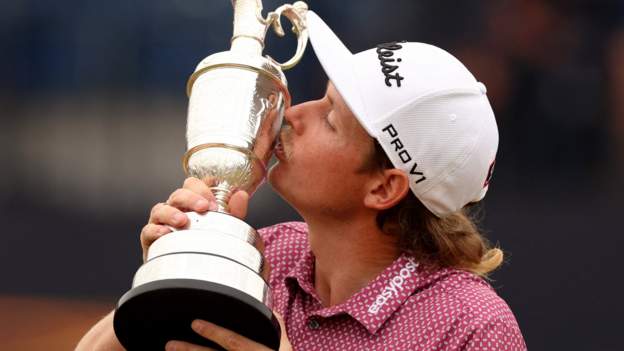 Cameron Smith stunned St Andrews by snatching the 150th Open Championship title by one stroke from Cameron Young, as Rory McIlroy finished third.
It is a first major for the Australian, who carded a magnificent bogey-free eight-under-par 64, that featured five successive birdies from the 10th, to win on 20 under par.

The 28-year-old had to roll in a three-foot birdie putt at the last to avoid a play-off with American Young, who had seconds earlier eagled the par-four hole to post a 65 and reach 19 under.

McIlroy, who led overnight by four shots alongside Viktor Hovland, closed with a two-under 70 to finish third, while Hovland shot a 74 to slip to 14 under and joint fourth place with England's Tommy Fleetwood, who closed with a bogey-free 67.

Make no mistake, though, McIlroy did not lose this. Smith won it.

Yes, the Northern Irishman missed seven birdie putts of fewer than 20 feet, including crucially on the 17th after a brilliant approach set up the three he realistically needed to give him a chance of catching Smith with the same score on the last.

But if you shoot a two-under score when starting the final day with a four-shot lead, you will win more than you lose.

"I didn't feel like I did many things wrong, but the putter went cold on me throughout the round," said the 33-year-old, who had 36 putts in his 70 shots. "I did what I wanted to do. I played a really controlled round of golf.

"Both Camerons, but especially Smith, went on a run on the back nine. I had to dig deep to make some birdies and I couldn't.

"I got beaten by the better player this week. To shoot 64 to win an Open Championship at St Andrews is one hell of a showing, so hats off to Cam, he's had an unbelievable week."

The Claret Jug is Smith's because he had a magnificent day. His is the lowest round to win The Open at St Andrews and his 20-under-par total eclipses by one Tiger Woods' record here, set in 2000.

He took just 30 shots to complete the back nine, including a brilliant par save on the 17th when he putted around the fearsome Road Hole bunker that guards the green before stroking in from 12 feet.

Smith is also the first Australian to win the championship since 1993, when Greg Norman - now the face of the rebel LIV Golf series - also shot a final-round 64 to overhaul Nick Faldo at Sandwich and win his second Open.

"To have the 150th Open at St Andrews and to walk away with the win is something I've dreamt of," he said. "It's unreal to look at the names on this trophy and then see mine.

"I am definitely going to find out how many beers can fit in this jug, for sure."

The world number six - and 2020 US Masters runner-up - started the final round on 12 under and picked up two birdies in his first nine holes to gain a stroke on the favourite, whose sole birdie came on the par-five fifth.

But then Smith went on a run that wiped out the lead and effectively won him the title, while McIlroy was playing controlled golf.

It was the sort of "boring" play McIlroy had said at the start of the week he needed to win a fifth major title and his first for eight years. And he came mighty close to achieving it.
Add Comment