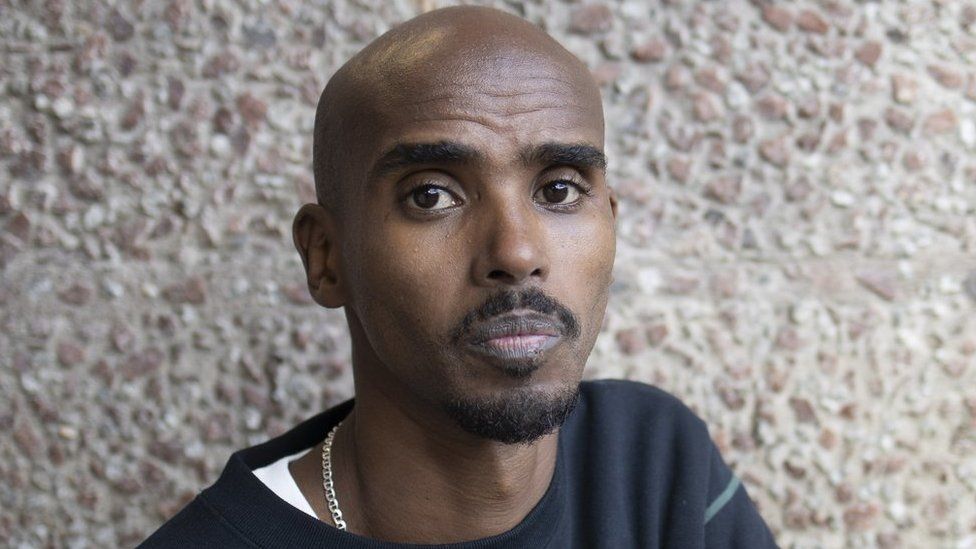 Sir Mo Farah has said he is "relieved" that the Home Office will not take action against him after he revealed he was trafficked into the UK.

The Olympic star disclosed on Monday that his real name is Hussein Abdi Kahin, but he got British citizenship under the name Mohamed Farah.

Mohamed Farah was the name given to him by the people who brought him into the UK illegally.

The Home Office told BBC News it would not investigate Sir Mo.

"It makes me relieved," he said in an interview with BBC Radio 4's Today programme.

"This is my country. If it wasn't for [my PE teacher] Alan and the people who supported me throughout my childhood then maybe I wouldn't even have the courage to do this.

"There's a lot of people that I owe my life to - particularly my wife, who has been very supportive throughout my career, and who gave me the strength to come and talk about it, telling me it's okay to do this."

Legally, the government can remove a person's British nationality if their citizenship was obtained through fraud.

But a Home Office official told BBC News it would not take action over Sir Mo's nationality, as it is assumed children are not complicit when their citizenship is gained by deception.

Speaking about other victims of child trafficking, Sir Mo - a four-time Olympic champion for Team GB - told Today programme presenter Amol Rajan: "No child wants to be in that situation. I had the choice made for me, and so young. I'm just grateful for every chance I've got in Britain to embrace my country, and I'm proud to represent my country the way I did.

"That's all I could do within my control - I had no control when I was younger over where I went. That decision was made for me and taken away from me."

Sir Mo told the story of being trafficked in a documentary from BBC and Red Bull Studios, which airs on Wednesday but has been seen by BBC News.

As a teenager Sir Mo said he confided in his PE teacher, who helped him to be fostered by another family.

The teacher also helped him to obtain British citizenship and a passport so that Sir Mo could compete in international athletics competitions.

After receiving widespread praise for speaking out, Sir Mo told the Today programme: "I'm just happy to share what I've gone through and [has] made me the man I am today."

Sir Mo told the documentary that he wanted to tell his story to challenge public perceptions of trafficking and slavery.

"I had no idea there was so many people who are going through exactly the same thing that I did. It just shows how lucky I was," he says. "What really saved me, what made me different, was that I could run."

The woman who brought Sir Mo to London has been approached by the BBC for comment, but has not responded.

Watch: Sir Mo responds to the Home Office's response not to take action

WATCH: People know me as Mo Farah, but it's not my name